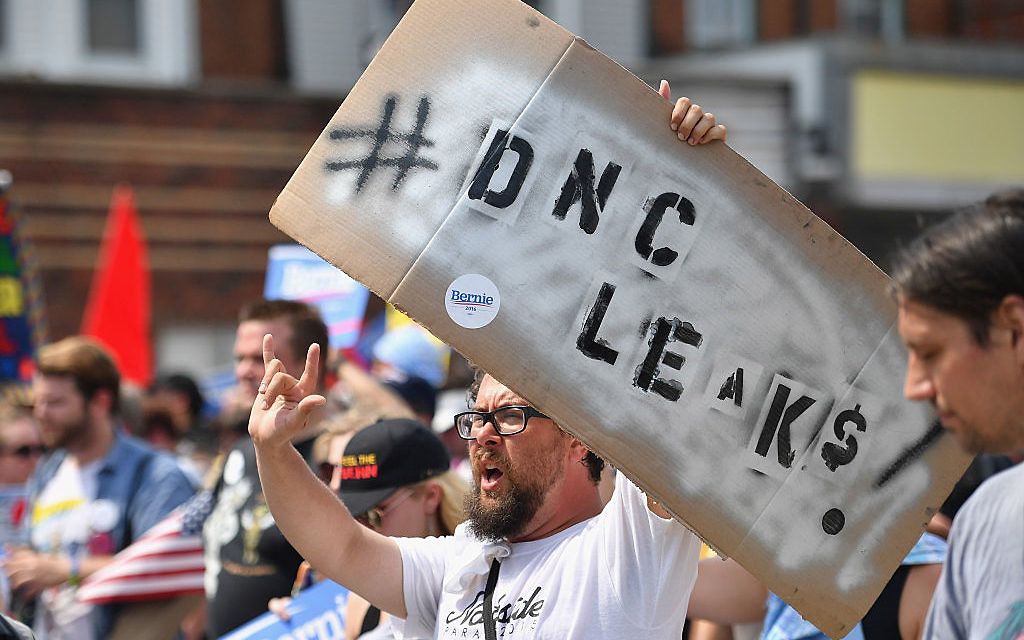 Philadelphia — As he munched on a muffin after getting his badge as a New York delegate to the Democratic National Convention, Lew Gruber of Manhattan mused that he would have preferred to see Vermont Sen. Bernie Sanders nominated as president here this week.

“But it is what it is,” he sighed. “I think it’s very important to defeat [Republican presidential nominee Donald] Trump. And we are electing progressive candidates up and down the state.”

Sanders is Jewish, a faith he reaffirmed Sunday on CNN after the emails were disclosed.

“They were supposed to be neutral and they were not,” Gruber (shown at right) said of the DNC while sporting a hat with a Sanders button. “We got 13 million votes. We’re not going away. Bernie is still our leader.”

Rep. Jerrold Nadler of Manhattan said he does not know the Marshall and called his plan to weaken the Sanders’ campaign “a bad suggestion.” But he stressed that “no one publicly said anything” about Sanders’ religion.

“I presume someone said knock it off [in response to the CFO’s email],” he said. “It was a private email, which was bad enough. But nobody did anything, so I can’t get too upset.”

Elisa Sumner, the Democratic chair in Dutchess County, was less forgiving, saying those who pressed for Hillary’s victory in the emails “should be removed immediately.”

“Just for the stupidity of putting things like that in an email,” she said. “I’m a Hillary supporter and [these emails] just exacerbate” the divisions in the party between Clinton and Sanders supporters.

“But most of us understand it was the work of a few stupid employees at the DNC. … Most of the Democratic Party will be united.”

Referring to evidence that Russian operatives had hacked into the DNC’s network to steal the emails, Sumner said: “It shows the Russians are trying to influence our election, which is scary. It shows that Trump and [Russian President Vladimir] Putin are united. They always say, ‘Politics makes strange bedfellows.’”

Debra Cooper, a state committeewoman from the Upper West Side, said the divisions should not overshadow the significance of this convention — the first time a woman is nominated as the presidential candidate of a major American political party.

“This is historic,” she said. “She cracked the glass ceiling and has made holes for other women. My district went 74-26 percent for Hillary. It is one of the most Jewish districts in the state. Bernie is a mensch. He will do the right thing. He wants to make sure Donald Trump does not win.”

But Sanders was booed when, in an address to hundreds of his delegates at the Convention Center Monday afternoon, he said they must go out and “defeat Donald Trump and elect Hillary Clinton and Tim Kaine.”

As his supporters booed, Sanders waved his left arm to silence them.

“Brothers and sisters,” he implored the crowd, “this is the real world that we live in. Trump is a bully and a demagogue. Trump has made bigotry and hatred the cornerstone of his campaign.”

He must not win, said Sanders (seen above united with Clinton as cardboard cutouts in a hotel lobby near the convention center).

Rachel Lavine of Manhattan, a Clinton supporter and a member of the rules committee, said the platform includes a statement condemning the BDS (boycott, divestment and sanctions) movement and supports military aid to Israel, which would allow it to maintain its qualitative military edge in the region.

The Jerusalem Post noted that it also is said to declare that the Palestinians “should be free to govern themselves in their own viable state, in peace and in dignity.”

Lavine said that language was inserted because “you can’t just support military aid to Israel, you have to support humanitarian aid for the entire region because there is so much poverty there. Israel is our friend and we have to make sure it is safe and secure. … [But] military aid alone will not work.”