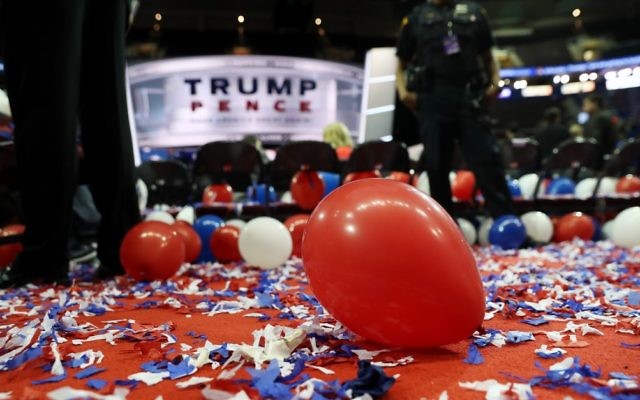 I am not someone who sees an anti-Semite under every rock.  Nor do I think that every person expressing noxious views is an updated version of Adolf Hitler.  In fact, I find the invoking of Hitler and all things Nazi to explain—or explain away—behavior, to be deeply offensive.  You see, I am missing many branches of my family tree thanks to the treachery and murderous behavior of actual Nazis and their accomplices.

Yet I am neither blind nor deaf to the swirl of rage, intolerance, and scapegoating that we are seeing and hearing daily, it seems, in this ugliest of American political seasons.  The vitriol is emanating in the majority from the Republican side of the aisle, and the convention in Cleveland has put on display a kind of mob rule that should terrify all of us.

When a speaker at a presidential nominating convention calls for the execution of the candidate of the other party, when a crowd of many thousands chants, “Lock her up!”  and when even Satan is invoked to slander that same candidate, we should all be deeply concerned.  We have seen a version of this movie before, and it doesn’t end well.

We can, and should, agree to disagree about issues for which we feel great passion.  But we cross a line when we vilify people to the point of declaring them worthy of being killed.   We cross other, equally concerning lines when we embrace lies with near giddiness, and whip already angry and agitated citizens into a frenzy.

And we debase ourselves profoundly as citizens by allowing a man who has exhibited a complete absence of principles, and who stands for nothing but his own aggrandizement, to “lead” a major political party.  Yet we have only ourselves to blame for allowing what was in its infancy a clown circus and is now a bona fide horror show, to emerge and to grow.

As I mentioned, I am not one casually to invoke comparisons with Nazis and Nazism, but too many arise to ignore.  There were those in positions of power in Germany who thought they could co-opt Hitler, that he would moderate his views, that he didn’t have staying power.  They cynically accommodated him in order to maintain their own positions, but he outwitted them.  Sound familiar?

Hitler didn’t do his own dirty work.  He was too much of a coward and a failure as a man to take on anything that would shine further light on those shortcomings.  So he unleashed his mobs, people emboldened by his encouragement, bullies who felt important by attacking elderly Jews, harassing women, and burning synagogues.  Much like the angry white men, proud Trump supporters, who have screamed anti-Semitic invectives at his rallies.

Let’s also be clear that demagogues are not necessarily men of slight stature in badly tailored suits.  Trump’s handmade Italian finery cannot hide the fact that he is the indifferent puppet master–unleashing chaos and more–who blithely glides across stages uttering meaningless platitudes about making America great again and keeping us safe.  And let’s not forget Trump’s oft-repeated promise to negotiate better deals to reverse America’s long slide and humiliation at the hands of other nations.  Anyone with even a passing acquaintance with history will recognize what kind of playbook Trump is using, and the descent into madness to which it can lead us.

My father, of blessed memory, who survived the horrors unleashed by Hitler and his minions, is the one person I am desperate to talk with about all of this.  I try to tell myself that the world has seen worse, that even the violence we are witnessing here and abroad is a pale trickle in comparison with the slaughter Europe experienced during World War II.  The problem of course is that World War II wasn’t the beginning; it was the culmination of a clever and cynical manipulation of an angry, aggrieved, and economically stagnant nation, one that was hungry for a messiah, even if that messiah led them to ruin.

Nina Mogilnik, an advisor to non-profits and foundations in the New York City area, is most grateful for the example her father set for her about understanding history and treating others with dignity and respect.