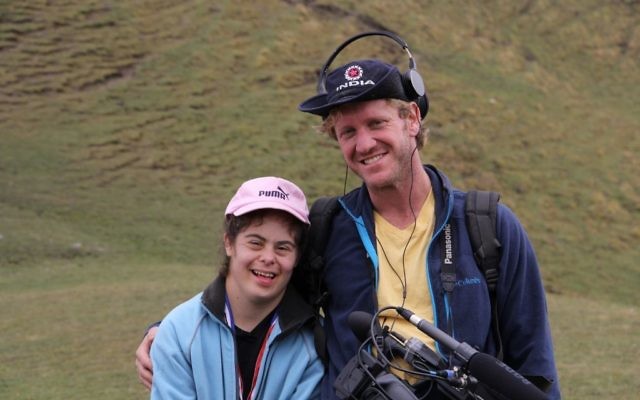 Director Yonatin Nir during filming. Courtesy of My Hero Brother

The 2016 Israeli documentary My Hero Brother, directed by Yonatan Nir, has received awards and accolades since its premier. The film tells the story of a group of young people with Down syndrome who embark on a demanding trek through the Indian Himalayas, accompanied by their brothers and sisters. As the siblings deal with the physical and emotional challenges of the trek, unresolved conflicts come to surface and heart-warming friendships develop. The original soundtrack was written and performed by Israeli musician Ehud Banai.

Yonatan Nir describes the film saying, “Through the eye of the camera, we catch a glimpse into the internal world of those with Down Syndrome, and are led on our own journey of discovery and admiration, as their inspiring natural qualities begin to emerge; wholesomeness, direct and honesty emotional expression, and the capacity to feel and communicate unconditional love.”

Our New Normal editor Gabrielle Kaplan-Mayer had the chance to speak with Nir this week about the experience of sharing the film and his upcoming tour in North America.

GKM: How did you get involved with My Hero Brother?

YN: I’ll go back way before the film to share about my childhood. I grew up in a kibbutz with a girl my age who had Down Syndrome. At the kibbutz, kids lived all together and so she was like my sister form a very young age. Down Syndrome was never something weird for me.

After my military service, I went traveling around the world and started writing and taking pictures for Israeli newspapers and also for National Geographic. I started to be attracted to storytelling; it’s great way to make an impact and to learn about the world. I wrote many article as a photojournalist and went on to study documentary filmmaking. My first film, Dolphin Boy, received a lot of attention and was picked up by Disney. I’m always interested in stories something about someone struggling. After Dolphin Boy, I got a call about this trek through the Himalayas with people who have Down Syndrome. I knew people with Down Syndrome and how they can open your heart and touch your soul. The story of brotherhood and sisterhood in families with kids who have special needs…is untouched. It’s not as spoken about as the story between parents and their kids with special needs. But the longest relationship in nature is between brothers and sisters.

I met with Enosh Cassel and Itamar Peleg. Enosh had taken his brother Hannan, who has Down Syndrome, on a trip with Himaylas on his own and he brought footage to show me. Enosh and Hannan’s story was shown on Israeli media and Enosh started to get so many calls from people who wanted to do the same trip. Itamar was the trip operator. They worked together to gather people together and they raised the money for the trip. I came on to join them and create a documentary of the experience. 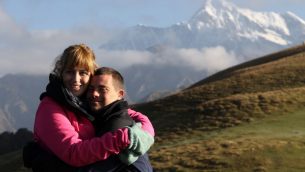 Trekking the Himalayas. Courtesy of My Hero Brother

GKM: What has it been like to see the film go out into the world?

YN: Of course it’s been very nice to get awards (most recently the Santa Barbara Film Festival) but it’s been amazing to see what the film does to the audience. People who have family members with Down Syndrome have reacted and shared that the film is authentic, it is not sugarcoated; they have said that someone has told our story in a true positive way. When we filmed, I didn’t run away from the issues and difficulties that these families face. Whether it’s comments people share on our facebook page or when I meet audience members, face to face (we’ve screened the film over 100 times in US already), family members of people with Down Syndrome are the most important critics for me. People will say, “We watched the film and decided to take our special needs sister on a weekend somewhere.” It’s about spending time with someone you love but may have difficulties with. It doesn’t have to be a trek to the Himalayas. The reality of the responsibility of brother and sisters is very serious. That this film inspired so many people in the world is such a good feeling for me and for my team. It took three years after the trek to edit and release the film. Its premier was at the Jerusalem International Film Festival and the siblings featured in the film stood on the stage were for 2 minutes while the audience didn’t stop their applause. 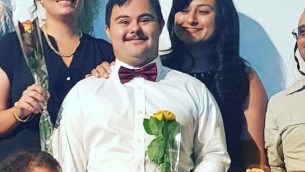 At the film premiere. Courtesy of My Hero Brother

GKM: What is happening with the film now? Where can people see it?

YN: It’s screening now in schools, community centers, organizations—you can fins details about how to book a screening on our web site. It’s been amazing to see how children and youth are reacting to the film. I believe that they will behave differently towards people with disabilities after seeing it. Documentary film is a great tool–a 1-hour film that you bring to a school can change someone’s perspective for their life. If you want to get to their brain, we go through their heart. Something will stay with them. 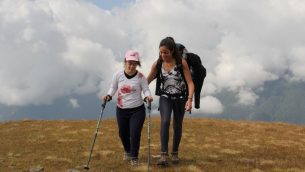 Trekking in the Himalayas. Courtesy of My Hero Brother

My Hero Brother is now an organization dedicated to building stronger bonds between young adults with Down Syndrome and their siblings through the reward of adventure travel. Yonatan Nir will be bringing the film to New Jersey on November 1st and 2nd; tour information will be available here.