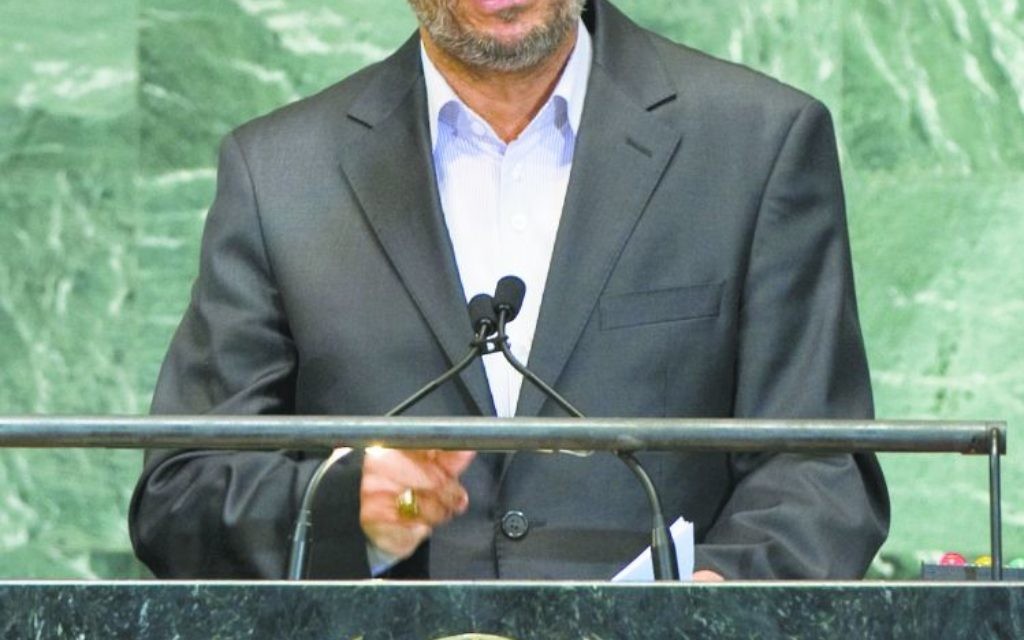 We could have been in Tehran.

Men in dark suits and earpieces stood outside the doors of the hotel, keeping watch for protesters and anybody else who didn’t belong. Inside, Iranian President Mahmoud Ahmadinejad prepared to meet a group of university students.

Except this was New York City, and I was one of those students.

In town for the United Nations General Assembly and between a whirlwind of media interviews, Ahmadinejad hosted a private dinner and briefing session Monday night at the Warwick Hotel with more than 150 students and professors from Harvard, New York University, Rutgers, the University of Pennsylvania, Penn State, Columbia and Stony Brook University, as well as some 50 UN interns.

As a journalist and student, I was eager for a firsthand encounter with one of the world’s most polarizing figures. As a Jew and the grandson of Holocaust survivors, I worried how I would get through the night without shouting, “You’re a damn liar!”

Before gaining admittance, we all had to give up our electronic devices and pass through security — staffed by U.S. Secret Service agents. Wait a minute, I wondered, aren’t they supposed to protect us from the likes of him, not vice versa?

Upstairs, a buffet of Persian rice, kabobs and salads awaited. Sadly, no kosher option. After a little schmoozing, we were led into a ballroom where Iran’s ambassador to the UN, Mohammad Khazaee, prepped us for the encounter.

Our meeting is the most important of Ahmadinejad’s visit, Khazaee told us, because, “you are the people who will shape the future of the world and the United States.”

That platitude unnerved me only when Ahmadinejad was greeted with a standing ovation by these “future leaders” when he entered the room. Likewise, I cringed when students later addressed him as “Your Excellency” during the question-and-answer session. One even prefaced her remarks by saying it was “a pleasure” to be in his presence. That’s when I felt my dinner beginning to come back up.

After eight years of listening to sound bites of this man denying my family’s suffering during the Holocaust and the rights of my cousins to live in peace in their ancestral home, the moment had finally arrived. What would he say?

“We believe all humans are seeking dignity,” Ahmadinejad said via the calm, disembodied voice of his translator on my headset. “The best way of bringing minds closer together is through dialogue. No one should seek to impose their views on others.”

Rather, he said, we should be building “a new world” utilizing new “humanity-driven points of view with fairness and tolerance for all human beings.”

Earlier in the day, Ahmadinejad had referred to the Jewish state as “a fake regime” and predicted that Israel would not be long for this world. But in this meeting, Ahmadinejad kept up an almost Pollyanna-ish demeanor as he sought to paint Iran as a symbol of peace and stability in the Middle East.

“We all must live in prosperity and security, showing kindness to one another,” he said. “All nations together can build a much more beautiful world, a much more loving world.”

His saccharine words were belied by his constant refusal even to acknowledge Israel by name.

Addressing a question about how to repair U.S.-Iran relations, Ahmadinejad said these “two great countries” have been at odds for 33 years but would be better off if they cooperated.

U.S. support for the Shah and for Saddam Hussein during Iraq’s war with Iran in the 1980s created “a negative mindset” toward the U.S. government among Iranians, he said.

“This doesn’t mean Iran has not committed mistakes. Perhaps Iran could have behaved better,” he said. “We are ready today for transparent dialogue.”

It all sounded nice, even if had little to no relation to the truth. There was no mention of Iran’s clandestine nuclear weapons pursuits, support for terrorist groups like Hezbollah and Hamas, sponsorship of terrorist attacks or violent suppression of domestic dissent.

“Without the presence of Iran, the region cannot be managed properly in a friendly manner,” Ahmadinejad said.

I couldn’t figure out whether or not he actually believed his own words.

When it came to Israel, Ahmadinejad said the role of the “Zionist regime” in the region is to create tension, and he blamed Israel — not by name, of course — for instigating five wars against its neighbors, imprisoning tens of thousands of Palestinians and destroying Palestinian homes with people still inside.

Western governments are unwilling to rein in the Zionists, he said, calling on the international community to “officially and severely” condemn threats against Iran, which is “committed to eradicating fundamental reasons that give rise to these tensions.”

As the meeting wrapped up, I was eager to get home. The next day was, after all, Yom Kippur, the Day of Atonement. Maybe part of me had hoped for a more Yom Kippur-like message, a plea for forgiveness, perhaps.

But Ahmadinejad had other plans. The next day, while I was in shul reciting the “Avinu Malkeinu” asking God to “nullify the thoughts of those who hate us” and “seal the mouths of our adversaries and accusers,” Ahmadinejad was at the United Nations, delivering his speech.