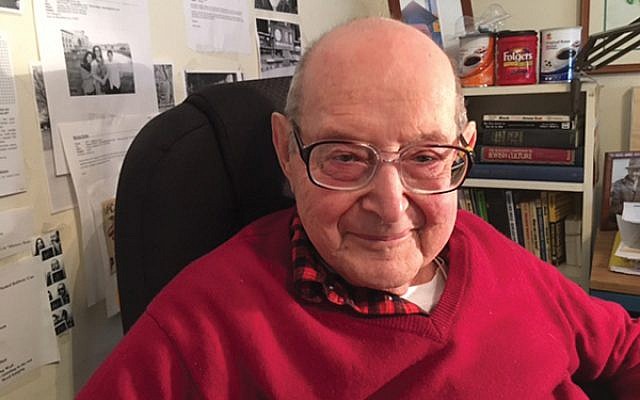 Liberal voice: Murray Polner edited Present Tense, an AJC quarterly on world affairs, from its launch in 1973 until it closed in 1990. Wikimedia Commons

I first met Murray Polner when he was editor of Present Tense: The Magazine of World Jewish Affairs, the elegant quarterly published by the American Jewish Committee. It was in the late 1970s and I was editing the Baltimore Jewish Times. Murray, who died May 30 at the age of 91, took an interest in a series of articles I had written for the Jewish Times on whether the Baltimore Sun was anti-Semitic, as many in the Baltimore Jewish community charged.

Murray, a brilliant, feisty and caring editor, asked me to write a piece for Present Tense on what I’d learned about media bias, and I was honored to take on the assignment.

I wrote a couple of other pieces for Present Tense back then and stayed in touch with Murray, who I considered a mentor and friend. I always enjoyed talking with him because he had sharp insights on and was passionate about world affairs, the Jewish community and the art of writing. He also took an interest in my career and we shared a love of baseball. His widely praised biography of Branch Rickey, the Brooklyn Dodger general manager who signed Jackie Robinson, suggested that Rickey was motivated by his religious and moral beliefs in breaking the color barrier.

Murray was the founding and only editor of Present Tense from 1973 to 1990, when it folded, reportedly for financial reasons, though some felt its liberal bent during the Reagan era was out of step with AJC, which continued to publish Commentary, the conservative monthly.

In a letter to the editor in The Jewish Week in 2015, Murray noted that a 1990 investigative piece in Present Tense asserted that the establishment Jewish lobby did not speak for most American Jews. “Some members of the Israel lobby were quite upset, and Present Tense was shut down soon after for debatable reasons,” he wrote.

Murray’s son, Robert Polner, recalled this week that his father was author, co-author or editor of at least eight books, including the influential “No Victory Parades: The Return of the Vietnam Veteran” in 1970. It was the first book to explore the toll the unpopular war took on those who fought in it. On the last page, Murray wrote: “… of this I am certain: never before in American history have as many loyal and brave young men been as shabbily treated by the government that sent them to war; never before have so many of them questioned as much, as these veterans have, the essential rightness of what they were forced to do.”

The book was criticized on the right and praised on the left, sparking a political debate as well as a much-needed exploration into the mental health needs of the veterans.

Murray served in the military during the Korean War and became a life-long anti-war writer and activist. His son noted that a few days before Murray died, he dictated to Robert a letter to The New York Times, criticizing the Trump administration for ratcheting up calls for war
against Iran.

The only exception to his pacifist views was the Holocaust. “It’s the hardest question of all,” he said, “and I’m not sure there’s an answer.”

He was active in the Jewish Peace Fellowship and the Interfaith Nutrition Network.

A child of poor Jewish immigrants who fled from Russia and settled in the Brownsville section of Brooklyn, Murray graduated from CCNY in 1950, received an M.A. in history from the University of Pennsylvania (1976) and a Ph.D. from Union University and Institute in Russian history (1972). He taught for 10 years in a Brooklyn high school, was an adjunct professor at several area colleges and served as executive assistant to Harvey Scribner, the first chancellor of the New York City Public Schools.

Seymour Lachman, a former Brooklyn state assemblyman and longtime friend of Murray’s, taught with him in high school and later became president of the Board of Education of New York. He said that Murray accomplished important things at the Board of Education, including offering night school courses for teenagers who held daytime jobs.

“Murray was an ardent Democrat espousing liberal values and he was a strong supporter of Israel and Zionism and the cause of Soviet Jewry,” recalled Lachman, who served as chairman of the Present Tense advisory board. “He was a progressive in the finest sense of the word and he firmly believed in editorial integrity.”

A resident of Great Neck, L.I., since 1961, Murray is survived by his wife of more than 68 years, Louise (Greenwald) Polner, their three children, Beth Polner Abrahams, Robert Polner and Alex Polner, and six grandchildren.