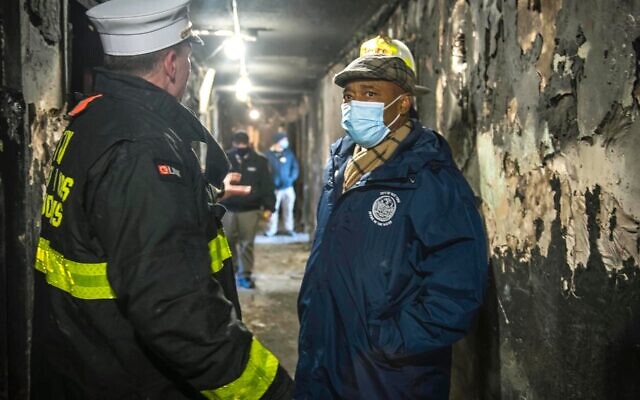 Good morning, New York. Today is the day when many Jews will recite the section of the Torah recounting how God gave the Israelites manna during their 40 years in the desert. Reciting the passage is said to be a good omen for prosperity in the year ahead. Hey, it couldn’t hurt.

HERE TO HELP: UJA-Federation of New York made an initial donation to the NYC Mayor’s Fund for emergency assistance to those affected by Sunday’s fire in the Bronx that killed 17. The philanthropy said it was mobilizing its partner agencies to provide shelter, crisis counseling and other social services for survivors, many of whom are Muslim immigrants from West Africa.

NOMINATED: Janno Lieber, the acting head of the Metropolitan Transportation Authority, was officially nominated to run New York City’s vast transit system. Lieber’s late parents were Charles Lieber, who served as president of the Hebrew Publishing Company and chairman of the Reconstructionist Foundation, and Mimi Levin Lieber, a pioneer in the field of consumer research and a champion of better schools in New York’s low-income neighborhoods. (New York Jewish Week)

TRUE CRIME: Robert Durst, the convicted murderer, tabloid sensation and scion of a Manhattan office and apartment building empire founded by his Austrian emigrant grandfather, is dead at 78. He was serving a life sentence for murdering his best friend. (JTA)

ZABAR’S 2.o?: Edith’s Eatery & Grocery, a restaurant and grocery store opening today in Williamburg, wants to be the “kind of old-school Jewish restaurant where people can come to eat — but also celebrate birthdays, mourn losses, meet for business, and so on.” Founder Elyssa Heller is calling it “Zabar’s for the next generation.” (Eater)

REMEMBERING: Michael Lang, one of several Jewish collaborators who staged 1969’s legendary Woodstock music festival in upstate Sullivan County, died in Manhattan. He was 77. The Brooklyn-born concert promoter was just 24 when he helped organize “Three Days of Peace and Music,” a generation-defining festival actually held on a farm belonging to another Jew, farmer Max Yasgur, 60 miles from Woodstock. (New York Jewish Week)

Survivor Nate Leipciger will share his experiences during the Holocaust in a Stories Survive speakers’ series program from the Museum of Jewish Heritage. By the time he was liberated in 1945, Leipciger had survived seven different concentration camps. Register here. 2:00 p.m.

The Anti-Defamation League and the Jewish Federation & Foundation of Rockland County will mark the second anniversary of an antisemitic attack in Monsey, New York that claimed the life of Josef Neumann, who was stabbed by an intruder during a Hanukkah party at a rabbi’s home in late December 2019. Attorney General Letitia James, Sen. Chuck Schumer and Kirsten Gillibrand and Rep. Mondaire Jones will be among those offering remarks during the virtual event. RSVP at MediaNYNJ@adl.org. 7:00 p.m.

Correction: Yesterday’s Jewish Week/Daily incorrectly identified the school where “Judge Judy” Sheindlin has established a scholarship for female law students. It is the New York Law School, not the NYU School of Law.