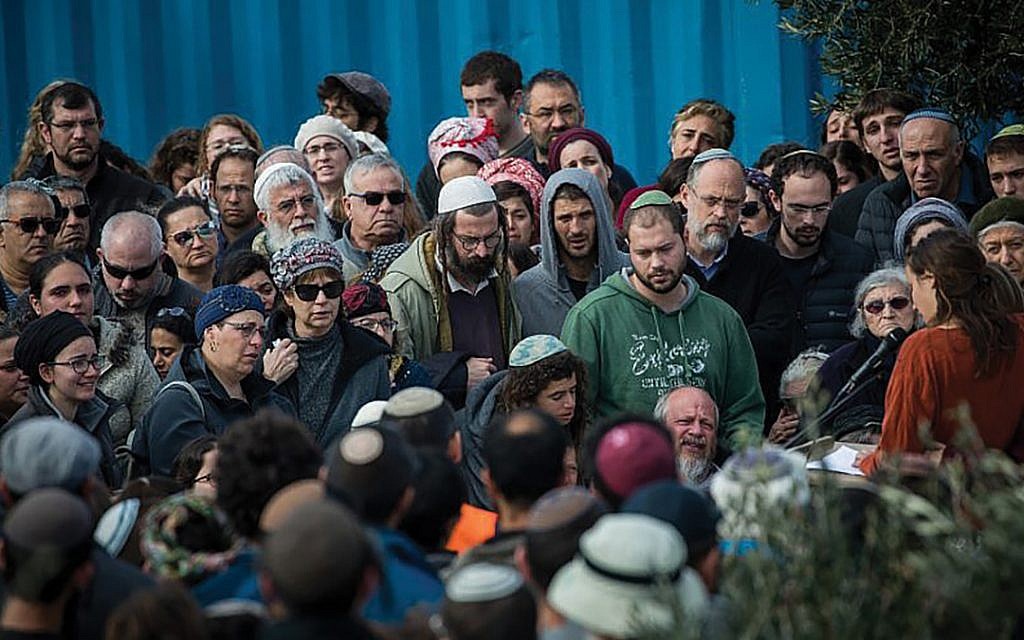 The scene at Ori Ansbacher’s funeral earlier this month. In Tekoa this week, thousands of Israelis hiked and played music, by way of vigil, to honor two of the 19-year-old’s passions. Yonathan Sindel/Flash90 via JNS.org

Two weeks ago, Ori Ansbacher, 19, met a brutal end at the hands of the terrorist who assaulted and killed her in a Jerusalem forest. The suspect, Arafat Irfaiya, 29, has confessed. On Feb. 7, he went from his Hebron home to Jerusalem, and identified his target in the forest, where he subsequently abandoned her body.

At that same forest, thousands of Israelis, predominantly young people, gathered on Tuesday and took a long walk, by way of vigil, to the city center, where they played music, held creative workshops and prayed.

It’s no coincidence that they put on their walking boots and got out their musical instruments to memorialize Ansbacher. She was a musician and a nature lover who was in the middle of a year of national service with an organization that enables special-needs youngsters, both Jews and Arabs, to explore the great outdoors.

Ansbacher, a religious teenager, lived in a settlement, Tekoa. The loudest voices after settlers are murdered are often those calling for more settlement building, by way of tribute. And naturally, politicians went into auto-pilot, with right-wingers like Education Minister Naftali Bennett taking the opportunity to call for the death penalty for terrorists. But in Ansbacher’s case, among many others, poetry has taken the place of politics. 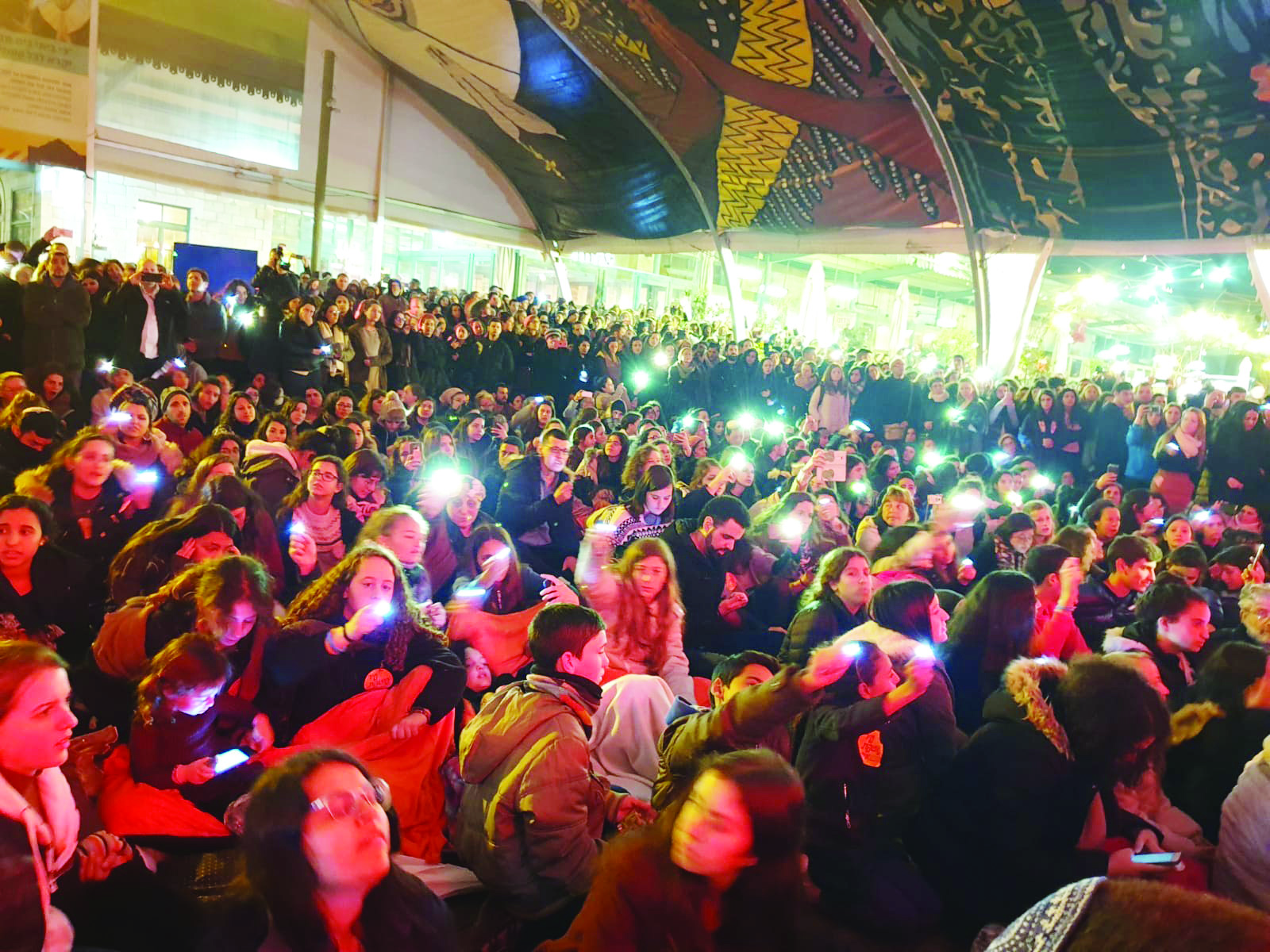 Over recent days, Ori Ansbacher’s poetry, set to music, has been read at memorial gatherings like this one around Tekoa, a hub for artists and performers. The gatherings have attracted some of Israel’s most celebrated musicians performing for free. Eliaz Cohen / Courtesy of the ANSBACHER FAMILY

Tekoa isn’t your average settlement, and certainly not your average settlement with a large religious population. It is a hub of artists, performers and hippies. It was the home of Menachem Froman, the kabbalist rabbi and pioneer of settler peace activism — a man who tried to thrash out a peace deal with Hamas and who was prepared to live in his settlement under Palestinian rule if needed for the sake of peace.

Over recent days Ansbacher’s poems, set to music, have been heard at memorial gatherings around Tekoa. “Peace songs with the word shalom fell out of favor with the collapse of Oslo, but they are being sung now,” Shaul Judelmen, a rabbi who moved from Seattle to Tekoa, told me on Tuesday. He was referring to the 1993 Oslo Peace Accords, which ushered in a period of hopefulness between Israelis and Palestinians.

“Act,” she wrote in her final poem, “To make your world / A world of peace / Everlasting peace / The peace of youth.” She wrote about the purity of youth and making “peace within yourself.”

In Tekoa there is a bitter sense of deja vu. “This is the fourth child this community has lost to terror in the last 20 years,” local leader Shani Simkowitz told me. “The tragedy has a ripple effect on everyone here — friends, family and the whole community.” One of those murdered, 13-year-old Koby Mandell, was an Israeli-American, his family having emigrated from the United States to Israel in 1996. His mother, Sherri Mandell, is the author of “Blessings of a Broken Heart,” about coping with her son’s murder.

Yet despite this familiarity with the cruelty of the conflict, there remains an optimism in Tekoa. The mourning has been so far outside the box that Palestinians visited the shiva house.

In an unusual scene, 10 Palestinians, including a prominent sheikh, arrived at the shiva house. They showed up with 10 Israelis, mostly settlers, who planned the visit with them.

The sheikh, who refused to be quoted by name for fear of recriminations in his community, said: “I, and many other Palestinians, are devastated by this murder and strongly condemn it. This is unacceptable to us — it is against our law and our religion.” 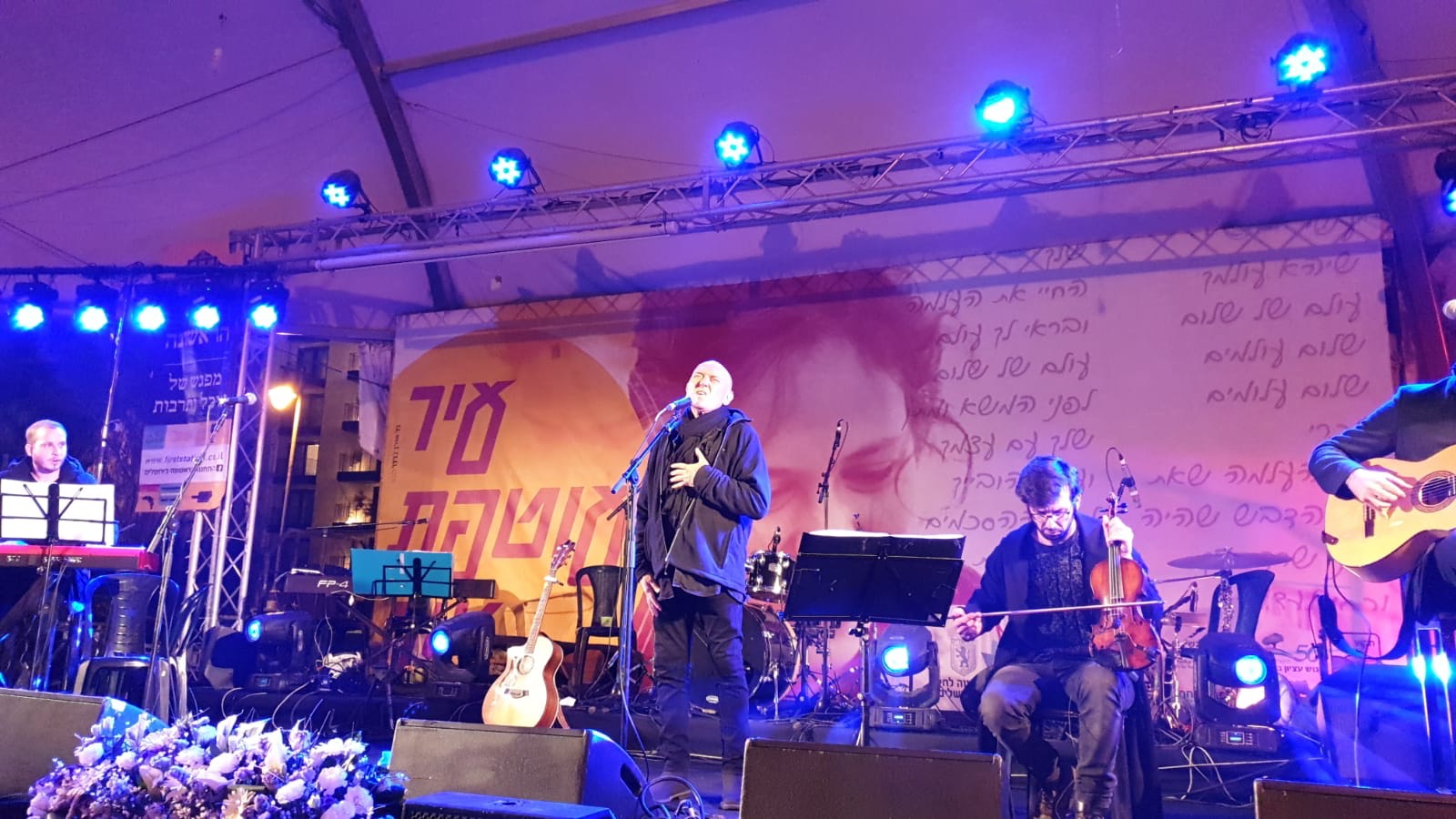 A memorial gathering for Ori Ansbacher near Tekoa. Eliaz Cohen / Courtesy of the ANSBACHER FAMILY

Eliaz Cohen, a dovish settler who accompanied the Palestinians, said: “Their message was they were sorry they could not prevent such a thing. They expressed frustration that they invest in reconciliation but can’t stop this kind of attack.”

Michelle Helemay-Devir, who organized the visit through the Tag Meir group, told me that the shiva call was “very moving.” She added: “It inspires a little bit of hope even in terrible circumstances and dark, dark times.”

There was a backlash. The neighboring Palestinian town of Tuqu issued a statement decrying the visit. “We in the town of Tuqu, including all its institutions and clans, deny and condemn any participation in any delegation of this kind,” it said, declaring loyalty to the blood of “martyrs” and determination to be a “thorn in the side” of the “occupation.” 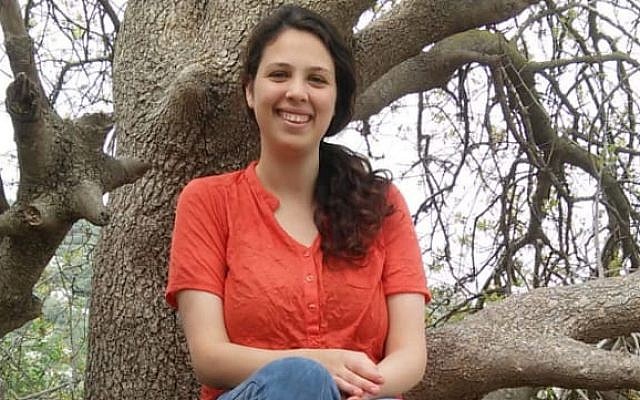 But this kind of backlash is to be expected. In fact, it only highlights the braveness of the 10 Palestinians who went to the shiva to acknowledge the pain of the mourning family and the bitterness of the conflict.

Ansbacher was wise beyond her years, as shown by her ability to navigate the complexity of the place where she lived, and to work through deep questions of what it means to live in a conflict and what it means to be good a person.

Her own words give her the best possible tribute. This is her last poem, which she wrote shortly before her death. The words reverberated from Tekoa to the Bronx, where Rabbi Steven Exler recited them on the Sabbath last week at his shul, the Hebrew Institute of Riverdale:

Claim for yourself
Anew
This sweetness
That was
Yours

Live, you young girl
Create yourself a world
A world of peace
Before the dialogue with yourself
And with your beloved