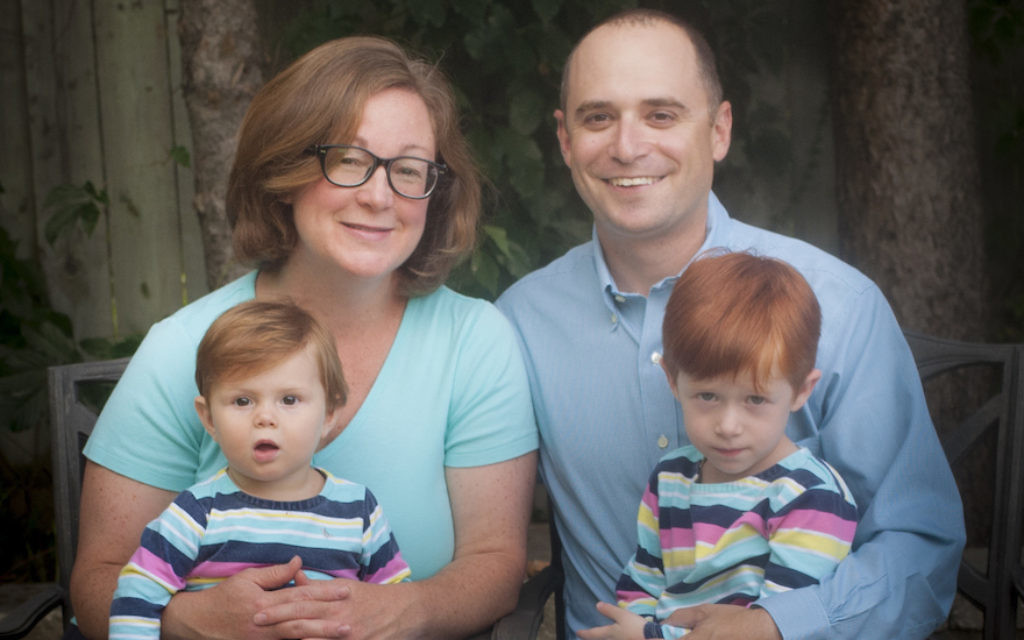 Rabbi Catherine Clark and her family. Clark had her first baby while studying at the Jewish Theological Seminary. (Steven Jack)

NEW YORK (JTA) — A few weeks after her first daughter’s due date, Catherine Clark was set to begin her fifth and final year at the Jewish Theological Seminary’s Conservative rabbinical school.

Clark was excited to graduate and ecstatic to become a mother at age 40. But because the school has no policy for parental leave, she was left to juggle a full-time academic schedule, two part-time jobs at Conservative institutions and a newborn. So on the first day of class, after Labor Day in 2011, she was there four weeks after her baby was born ready to start what she called “a really difficult year.”

“I was so relieved to be able to have a child and so thrilled to have a child at the time,” Clark told JTA. “That sustained me for how difficult that was, but that was a really hard year. Everyone was always so excited for me, but there wasn’t any structural support.”

Rabbinical students across denominations in the United States echo Clark’s experience: When they became parents, there was plenty of goodwill from fellow students and staff, but almost never a clear policy to follow. Across eight rabbinical schools, ranging from modern Orthodox to Reform, only two liberal Orthodox institutions had policies of any kind for new parents. The other six have general leave-of-absence policies — usually a semester — but nothing specific to new parents.

Instead, students are left to make arrangements by themselves, professor by professor, and hope the baby comes at a convenient time. While most of the current and former students who spoke with JTA said they had positive experiences as new parents at rabbinical school, they added that they wished there were an established framework to follow.

“Nobody was really clear what the average was or what the policy was, so that, for me, created a certain amount of stress because I didn’t have a clear sense of what to expect,” said Rabbi Sarah Mulhern, a recent graduate of the nondenominational Hebrew College in Boston. “But on the other hand, that created flexibility. Because there’s no written policy, people were able to be generous with me.”

Students and administrators across schools acknowledged that there are differences between a workplace — where employees are concerned about their job security and compensation — and a university, where students are paying tuition for a course of study that they, and the institution, expect to be finished on a schedule. And Jewish institutions aren’t unique in this regard. The Duke Divinity School, which trains Christian ministers, is working on a policy, but currently also asks students to work individually with faculty.

But the Princeton Theological Seminary, also Christian, does have a lengthy policy specific to new parents that allows students to reduce their course load for one semester. New parents can attend class but delay submitting major assignments, while retaining whatever benefits they receive as students.

During the past couple of years, Jewish Theological Seminary student Katie Greenberg has worked with the school’s administration to craft an overall family leave policy for medical issues as well as childbirth.

Greenberg isn’t pushing for a months-long leave that would disrupt the academic schedule. But she does want to create a standard road map and guidelines for expecting parents to follow, and to allow students to telecommute to class. And she’d like to to make it easier for expecting parents to receive financial aid for summer school, allowing them to take fewer classes during the year.

“People didn’t necessarily know where to go first, who can help you if you’re having an issue,” said Greenberg, who’s now pregnant herself and will graduate next year. “In my ideal world, I wish all professors would be open to that, to Skype or come in with a kid.”

A few rabbinical students interviewed by JTA said the absence of a parental leave policy is particularly glaring given the American Jewish community’s longtime emphasis on family and fertility. 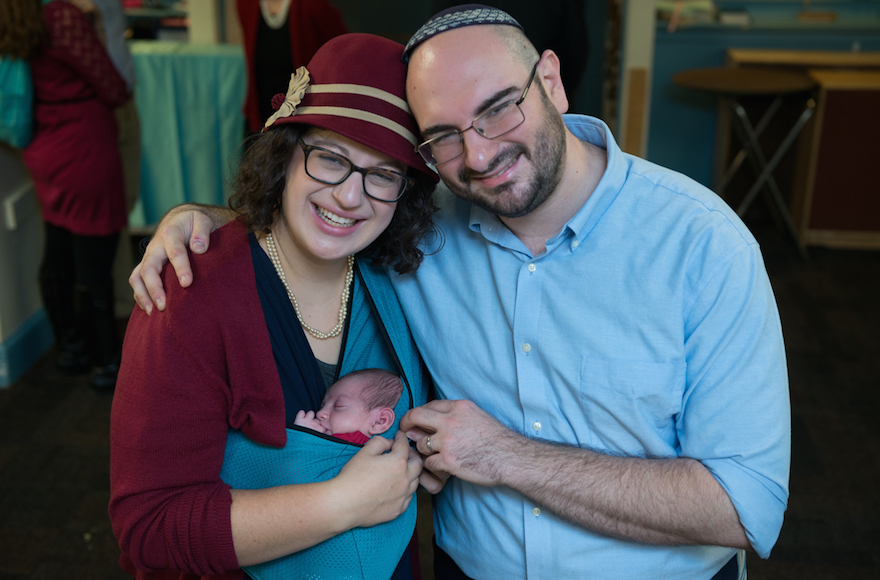 Sarah Mulhern, a recent graduate of Hebrew College, with her husband and newborn baby. (Courtesy of Mulhern)

Two years ago, JTS trumpeted a new policy of offering up to eight weeks of paid parental leave to staff. In an email announcing the policy, JTS Executive Vice Chancellor Mark Gary wrote the policy “reflects our values as an institution.” The Reconstructionist Rabbinical College also offers four weeks of leave to staff, but has no parental leave policy for students.

“There is a tension between Jewish communities wanting to support families and the reality of institutions where we don’t have policies in place that help support people during those times,” said Lindsey Healey-Pollack, a JTS rabbinical student who gave birth two years ago, during her third year in the program. “For me it did all work out, but we would benefit from having a clearer articulation of a policy.”

Along with JTS, the Reconstructionist Rabbinical College and Hebrew College, the Reform Hebrew Union College-Jewish Institute of Religion, the Conservative Ziegler School and Yeshiva University’s modern Orthodox seminary all lack specific parental policies. Professors in many of those schools will allow students to participate in class remotely via video, or to take incompletes and finish coursework during breaks.

The only schools with policies are Yeshivat Chovevei Torah, a liberal Orthodox rabbinical seminary for men, and its companion school for women, Yeshivat Maharat. They are also the only schools of the eight in which students receive stipends rather than pay tuition, though Y.U.’s school is free. Men at YCT receive two weeks of leave, and women at Maharat six weeks.

“We’re trying to balance being supportive and helpful to the student with the academic requirement that our accreditation body requires,” said Cheryl Peretz, Ziegler’s associate dean. “So we can’t simply say, ‘Oh, you’re done with the semester.’ We end up working individually with each student.”

The majority of HUC’s rabbinical students are women, while women made up approximately 40 percent of the most recent graduating class at JTS.

Students have figured out myriad ways to manage a newborn and their classes. Some finished final papers over the summer. Another did her best to give birth soon after the academic year ended. Another brought a babysitter to watch her child in the school’s breastfeeding room. Another completed work before the semester began and arranged with professors to take a month off. Y.U. student Matt LeVee took his baby to Talmud class in a carrier as his friend snapped photos.

“If someone has a child or just got married, it’s OK if they’re not [keeping up] with the class material at that moment,” LeVee said. “Given the circumstances, they’re trying to work with you.”

At Yeshivat Maharat, Tali Schaum Broder said being in all-women classes made the post-birth experience especially positive. Students visited her during her six weeks off, at times Skyping her into class or reviewing the material with her afterward. Students supported her when she nursed her daughter in the classroom. Rabbinical students at other schools also said classmates were supportive when they brought babies to class.

“When she cried, I would nurse her,” Schaum Broder said. “Everybody was totally great about it. It kind of lent itself to a very loving type of encounter with all of us, and having the baby added a light to the ‘beit midrash,’” Hebrew for house of study.

Still, several rabbinical students noted that the schools’ lack of policies isn’t particularly surprising, since the United States is the only developed nation not to mandate paid leave in workplaces. That hit home for Clark soon after she graduated and took a pulpit in London, Ontario, where Canadian policy dictated that mothers could take up to a year of paid leave.

She had her second daughter in 2014 and took off 12 weeks before returning to work, which was near her daughter’s day care.

Though Ontario was just over the border, it was a world away, she said, from her experience in rabbinical school.

“This particular situation was perfect,” Clark said. “I could run over to day care and feed my daughter. The first year of her life was really wonderful.”