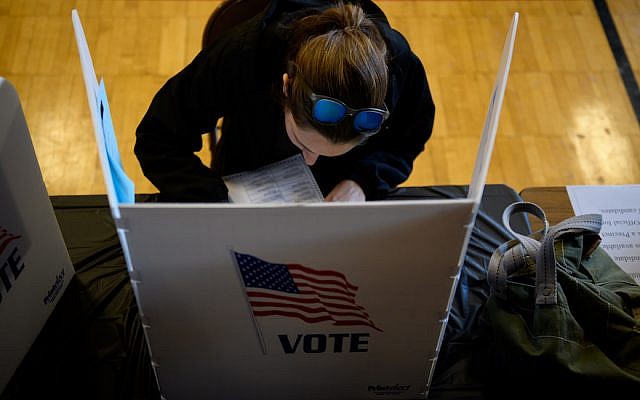 (JTA) — More than 75 percent of Jews voted for Democrats on an Election Day that was also good to Jewish congressional candidates.

A poll conducted by GBA Strategies, a Democrat-aligned pollster, and commissioned by the liberal Israel lobby J Street, found that 76 percent of Jewish voters voted for Democrats, while 19 percent voted for Republicans. A CNN exit poll found that the Jewish split was 79 percent to 17 percent.

According to The New York Times, 51 percent of American voters overall cast ballots for House Democrats, versus 47 percent for Republicans.

Beyond being a good night for Democrats, who took control of the House of Representatives and won several governorships, Tuesday had good news for Jewish candidates. According to a spokesman for the Jewish Democratic Council of America, all 23 Jewish incumbents who ran for reelection — 21 of them Democrats — won.

In addition, eight Jewish candidates entered the House, two Jews won governorships (in Illinois and Colorado) and one, Jacky Rosen, won her Senate race in Nevada. All are Democrats. The next House of Representatives will have a total of 28 Jews, and there will be nine Jewish senators.

Jewish voters’ strong preference for Democrats was driven by their disapproval of President Trump, and their blaming him, specifically, for helping influence the shooting at a Pittsburgh synagogue two weeks ago, said Jim Gerstein, GBA’s pollster. Seventy-five percent of Jewish voters disapprove of Trump, versus 25 percent who approve, and 72 percent of Jewish voters hold Trump very or somewhat responsible for the Pittsburgh shooting, in which 11 people died.

Gerstein said that Jews reflect the polarization in the rest of the electorate: While supporters of Trump appreciate his close relationship with Israeli Prime minister Benjamin Netanyahu, his detractors insist that doesn’t soften their disapproval for the president’s rhetoric or behavior.

“While the country is extremely polarized, American Jews are firmly in one of those two camps,” Gerstein said on a call with reporters Wednesday. “They’re firmly in that Democratic camp, that anti-Trump camp … Trump’s embrace of Netanyahu doesn’t mitigate the concern people have over anti-Semitism. These things are operating on completely different planes.”

Liberal Jewish groups are also celebrating. JStreetPAC, the political action committee affiliated with the liberal Mideast policy group, spent $5 million in midterm contributions and saw 128 of its 167 endorsees — all Democrats — win their races, including 22 new House members and 14 of 17 senators they endorsed. Forty-seven of the 58 candidates endorsed by the JDCA won.

“We like to think of it as pulling the emergency brake on the out-of-control administration and president we’ve been under for the past two years,” Jeremy Ben-Ami, J Street’s president, said on the conference call. He noted that more than half of the House’s incoming class is endorsed by J Street.

“The 2018 midterm elections were a clear referendum on President Trump, and a rejection of his hateful policies and rhetoric,” JDCA Executive Director Halie Soifer said in a statement. “Jewish voters overwhelmingly and decisively rejected Republicans because they have enabled an agenda that is a betrayal of Jewish and American values.”

Despite the results in the House, Jewish Republicans were cheering their party’s gains in the Senate as well as wins in a few key House races and governorships. The Republican Jewish Coalition raised a total of $3 million for candidates. A majority of its 25 endorsees won or are leading.

In particular, the group noted the victories of Kevin Kramer over Sen. Heidi Heitkamp in North Dakota, Brian Fitzpatrick’s House victory in Pennsylvania, and Denver Riggleman beating Leslie Cockburn in Virginia. Cockburn is the co-author of a 1991 book that harshly criticized Israel.

“Historically, the party holding the White House loses seats in Congress during the midterm election,” RJC Executive Director Matt Brooks said in a statement. “This year Republicans did well in a tough environment and increased their share in the Senate.”

One bright spot for Republicans nationally was Florida, which saw Republican candidates for governor and senator prevail in close, high-profile races. As of Wednesday, Rep. Ron DeSantis beat Andrew Gillum for governor by less than one percent, and Gov. Rick Scott was 0.4 percent ahead of Sen. Bill Nelson in the Senate race.

Florida Jews appear to have backed the Democrats in large numbers. Gerstein said that, while the sample size was small, GBA’s poll found that 70 percent of Florida Jews voted for Democrats on Tuesday.