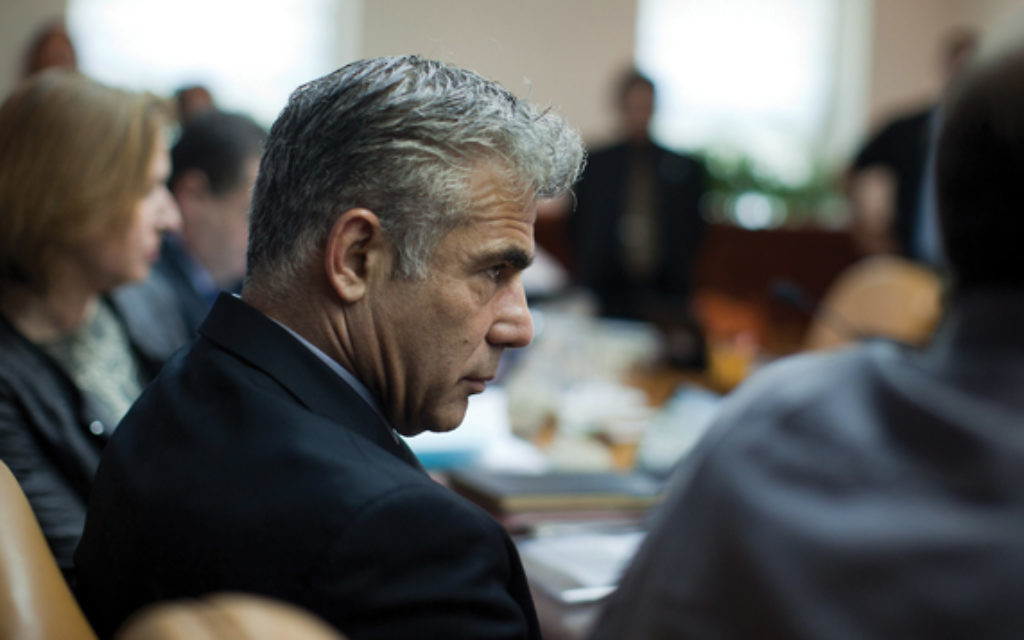 In explaining their actions, each said they said they could no longer have joint operations with Israeli businesses that deal with Jewish settlements in the West Bank. The European Union has labeled those settlements illegal under international law, and it has issued guidelines insisting that Israeli institutions based in the Israeli territories or doing business there must be denied European funding and cooperation.

Yet, the action that arguably generated the most attention on this issue was when actress Scarlett Johansson stepped aside in January after seven years as ambassador for the humanitarian group Oxfam International. Pro-Palestinian groups, Oxfam and other humanitarian organizations had objected to her becoming the spokesperson for SodaStream, an Israeli company whose largest factory operates in a Jewish settlement in the West Bank.

In explaining her decision, Johansson said that she and Oxfam had a “fundamental difference of opinion in regards to the boycott, divestment and sanctions [BDS] movement.”

Started by Palestinians in 2005, the movement has been coordinated since 2007 by the Palestinian BDS National Committee. It has succeeded in attracting the support of many liberal and humanitarian organizations.

Omar Barghouti, a BDS cofounder, was quoted as saying the boycott of SodaStream alone has “led to mass education of the public everywhere about the illegality of Israel’s settlements, Israel’s denial of Palestinian rights, and, crucially, the need to boycott companies producing in settlements as a minimal measure of ending complicity in grave violations of human rights.”

Although the Israeli newspaper Maariv quoted unnamed Israeli sources as believing the international boycott of Israeli settlement products has cost the Israeli economy about $30 million — with the agricultural sector in the Jordan Valley hardest hit — Israeli officials, economists and academics report no measurable impact.

In fact, an Israeli Knesset study released in February concluded that boycott initiatives have had “no noticeable impact on academic research in Israel.” And Israel’s National Science Foundation stated in response: “The effect of certain American organization’s efforts to impose a ban on Israel has to date been marginal. Further, the response rates in the United States and Europe to the Foundation’s requests for assistance in evaluating research proposals have been reasonable.”

These findings came despite a call in January by the 5,000-member American Studies Association to call for a ban on associating with Israeli universities. In the weeks following that vote, “nearly 250 university and college presidents took a stance against academic boycotts in general and Israel specifically,” according to Geri Palast, managing director of the Jewish Federations of North America/Jewish Council for Public Affairs Israel Action Network.

“The BDS movement gets heft from media coverage but its impact is minor to inconsequential,” she said. “Nevertheless, we cannot dismiss it. It is a serious movement and affects the discourse on what is going on among Israelis and Palestinians. It has more to do with affecting overall public opinion.”

Regarding the impact on the economy, Paul Gamble, a director in the Middle East Sovereign Division of Fitch Ratings, told The Jewish Week: “It’s very difficult to see any impact in the data. If you look at investment in Israel, it is still very strong. Israeli exports dipped a bit, but it was because of an appreciating exchange rate.

“For the moment, BDS is generating a lot of noise but the economy, which has been through a sluggish patch by Israeli standards, is performing well and picking up. It is not having a material impact. … The Israeli economy grew at 3.3 percent last year. If you compare that performance against other developed economies, it is one of the best.”

But Gamble said BDS is having “a psychological impact” because there is “a nervousness within the country” over it.

Gamble added that there is “a concern it could escalate.”

That concern has been fueled by the collapse last month of the U.S.-brokered Israeli-Palestinian peace talks.

Finance Minister Yair Lapid has warned that a boycott of Israel is the largest threat to the Israeli economy. He said a Finance Ministry study of a “reasonable reaction” from Europe — should it now kick the boycott effort into high gear — projected a 20 percent drop in Israeli exports, inflation and the loss of thousands of jobs inside Israel.

And he said that if the boycott of Israel takes hold in Europe, it could spread to the Far East and that imports might be curtailed.

Not only would Israel be hurt economically, Lapid added, but its renowned Maccabi Electra Tel Aviv baseball team — which this month won the Euroleague championship in Madrid — could be barred from European tournaments.

Although many Israeli and American Jewish leaders discount such dire warnings as not realistic, almost all expressed concern about a renewed BDS push.

The Israeli government sees it as such a serious threat that it is preparing to pour millions into an anti-BDS offensive. Under discussion is the possibility of filing lawsuits in European and North American courts against pro-BDS organizations and against financial institutions that boycott settlements and Israeli companies that do business with the settlements. In addition, Israel might begin encouraging friendly countries such as the U.S., Canada and Australia to adopt anti-boycott legislation.

Yossi Kuperwasser, director of the Ministry for Strategic Affairs, told The Jewish Week that the government is still studying the issue “and trying to see which [approach] is the most effective.”

“We are looking at every option,” he said. “BDS is only one aspect of a much wider effort to delegitimize the right of Israel to be the nation state of the Jewish people. There are economic and cultural aspects, as well as a media and diplomatic aspect, and we have to fight each one of them.

“We don’t think BDS has so far caused any real damage to Israel, but we have learned our lessons. If you neglect such a problem when it is small, you end up with a much bigger problem that you may have difficulty dealing with. It has the potential to become a strategic problem, so we would like to handle it now.”

According to a BBC poll taken last year, public opinion of Israel is worsening. Its favorability rating dropped 8 percent in both Spain and Germany, sliding into the single digits. And in Britain, the first European country to formally recognize the Jewish State in 1948, Israel’s favorability rating was only 14 percent.

Malcolm Hoenlein, executive vice chairman of the Conference of Presidents of Major American Jewish Organizations, said he anticipates the BDS movement will attempt to take advantage of the end of peace talks.

“They never look at who is responsible,” he said. “The clear goal is to isolate, delegitimize and in many cases ultimately destroy Israel as a Jewish state. You could now see the Palestinian Authority make applications to UN bodies in which they could bring charges against Israel for war crimes, and to specific UN agencies regarding the treatment of Palestinian children and the [lack of] water.”

Hoenlein said his organization has a national taskforce dealing with BDS that brings together more than 50 organizations, including many from outside the Conference of Presidents.

“We reorganized it to be more effective for the next stage of the battle, and we expect an increase in the efforts towards delegitimization and BDS,” he said. “We are developing also a pro-active campaign to bring out movie stars and actors that young people can relate to.”

Concern about the BDS movement has kept the increasing number of Israeli wineries in the West Bank from exporting to Europe.

Eyal Booksboim, a manger of the Gush Etzion Winery near Bethlehem just south of Jerusalem, said he doesn’t “even try to sell in Europe because everyone says it’s a big problem. But if it were not for BDS, I think we would … hire another person and send him to Europe to try to sell for us. But we’re not doing that yet. Why bother?”

But Yaakov Berg, CEO of Psagot Winery, said he believes the BDS movement may have actually improved his sales.

“We started in 2003 with 2,000 bottles and are now up to 200,000 bottles,” he said. “I hope and I think that maybe BDS helped us sell a little bit more. We have many more allies around the world than enemies. Maybe someone who wants to buy one case will now buy 10 because of BDS, believing it needs to be fought.”

But Gerald Steinberg, a political science professor at Bar-Ilan University, stressed that BDS is about “much more than economics.”

“It is to discredit and isolate Israelis in many different forms,” he explained. “When Jews and Israelis are made to feel uncomfortable on university campuses with all sorts of resolutions that condemn Israel, when church groups like the Presbyterians and Methodists vote to boycott Israel and attack Israeli policies, when academic groups in Canada and Europe repeat these allegations, when there is talk of war crimes and occupation … it can make Israel seem like a leper country, isolated from the rest of the world and an apartheid state.”

“It all has a depressing affect on individual Israelis, and that is a major goal,” he added. “Israelis like to project the sabra image of being unfazed, but the pressure is just as much on Jews in the diaspora — students in particular [because of] … all forms of bullying and intimidation. They are afraid to open their mouths and protest, fearing their grades could be affected. And if Jewish students protest on Facebook, they are attacked in social media, which is another form of bullying.”

One Jewish leader who asked to remain anonymous pointed out that “the extreme Islamists and Palestinians behind the boycott have manipulated and gotten the liberals behind them. So a lot of people involved in the boycott are simply tools and don’t even realize they are being manipulated. And that is what makes this movement both dangerous and appealing.”

The New Israel Fund, however, sees the BDS movement a little differently. Although it opposes BDS in all forms, it will fund an organization that supports a boycott of settlement goods.

Asked to explain the difference, spokeswoman Naomi Pass said: “Just like there are some Israelis who will not buy wine from the Golan Heights and musicians and orchestras who will not perform in the territories, we think that is their right and will not interfere with that. We say there is a big difference between Tel Aviv and Ariel” in the West Bank.