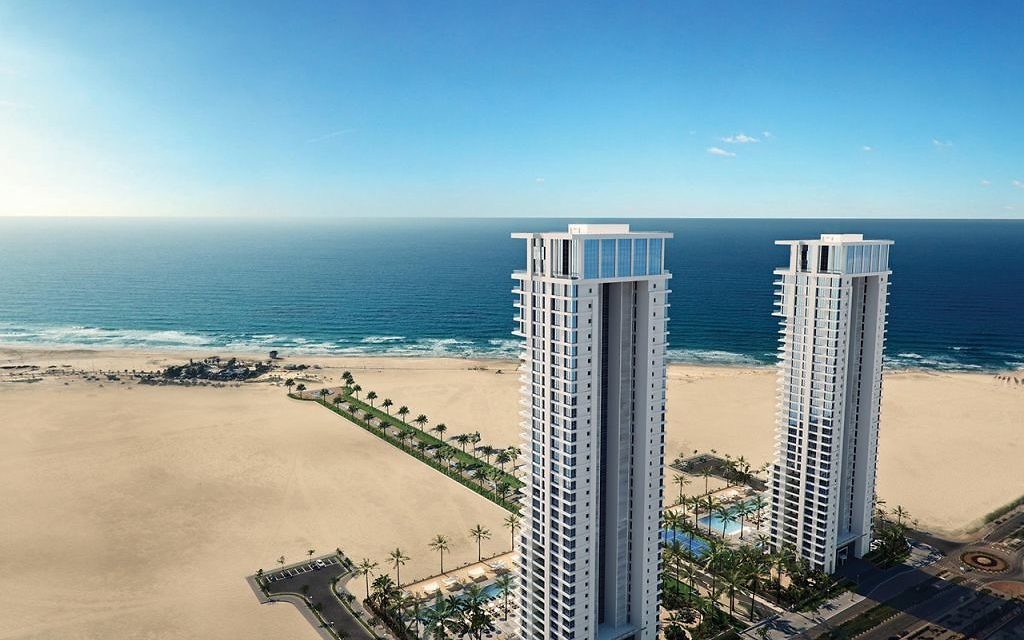 Compared to some of the astronomical asking prices on upscale properties in Manhattan, the outer boroughs and Northern New Jersey, luxury Israeli real estate projects are considered to be a relative bargain. According to a recent survey by Israel’s noted Geocartography Institute and the ONE Manhattan real estate firm, the average price of a luxury property in Tel Aviv, which is frequently referred to as the “Manhattan of Israel,” is currently one-third the price of a comparable apartment in the Big Apple.

“Tel Aviv is in the process of becoming the Manhattan of Israel, with more luxury towers being built for wealthy buyers, but the luxury apartment club will eventually expand to other cities, which is already happening,” Rina Degani, an urban planner and CEO of Geocartography, recently told the Netanya Real Estate Forum at Netanya Academic College. “During the past decade there were only four or five cities in Israel that saw real estate deals that exceeded more than $1 million, but today we see that in at least 10 such cities.”

The over-heated local property market has actually played a role in the accelerated growth of Israel’s high-end real estate development; as a result, a number of builders are erecting projects in several cities that have been designed specifically for buyers from North America and England.

Modi’in, one of Israel’s newest and fastest-growing cities, with a population of 100,000 people, has become a magnet for many English-speaking families from the U.S., Canada and the United Kingdom, etc. The city boasts a high quality-of-life quotient, underscored by highly rated schools, community services, synagogues, shopping centers, large parks and even Little League baseball teams that compete in the Israel Association of Baseball.

“Modi’in is the most modern city in Israel, as it’s only 20 years old,” said Raz Schreiber, vice president of marketing and sales for the Almog Group, which is currently building a luxury project dubbed “Almog HaTziporim” (Birds) in the city’s brand-new Tziporim neighborhood. “The city has attracted a very high-caliber population, which includes growing numbers of English-speaking residents, many of whom are from New York, New Jersey, etc. They are attracted to real estate projects that cater to the lifestyle they were used to in the U.S.”

Almog HaTziporim consists of five, four-story buildings that overlook picturesque Park Anaba, which American residents have dubbed “Central Park” because of its lake, green zones and bicycle paths. “We purchased the land to develop this project because of its strategic location both to the park and adjacent Road 431, which leads to the nearby shopping centers, as well as to the metro Tel Aviv region, where many people work,” Schreiber added.

The project’s various apartments have sold out quickly, with only a select number of spectacular penthouses featuring rooftop swimming pools and balconies still to be sold. Prices for the penthouses are around $1.2 million. “Modi’in is not only considered to be a great place to live but also a very safe real estate investment, because of its quality of life and proximity to Jerusalem, Tel Aviv and, of course, Ben-Gurion Airport, which is a big plus for those people who still conduct their business in the U.S. and UK,” said Schreiber.

A building in the Almog HaTziporim project in Modi’in, which consists of five, four-story structures in a new neighborhood. Courtesy of the Almog Group

According to the latest government statistics, prices for a four-room apartment in Modi’in have risen by 10 percent in the last year. The continuous influx of English- and French-speaking immigrants has created a buyer’s market. It is also for this reason that the Almog Group will be building a second luxury project in the city in the coming months. Dubbed the “City Center” project, it is part of Mayor Chaim Bibas’ grand vision to turn central Modi’in into an Israeli-version of midtown Manhattan, albeit with more trees and less traffic.

“We are going to build two 12-story towers that will also feature large luxury residential apartments,” said Schreiber. “There will be 30 luxury apartments for sale to buyers who don’t compromise on upscale standards of building and design. Even though we haven’t even broken ground, we have already received serious inquiries from foreign buyers, including couples and families from the U.S.”

Another city that has attracted a lot of attention from English-speaking buyers and investors is Netanya. During the past decade, Netanya has undergone a radical transformation from a crime-ridden, downtrodden city with a weak population to a bustling seaside metropolis, featuring thousands of English- and French-speaking new immigrants who have purchased breathtaking oceanfront properties along the city’s coastline. Netanya’s mayor, Miriam Feierberg-Ikar, has proudly proclaimed to Americans that her city is the “Mediterranean Miami Beach,” while telling potential French immigrants that Netanya is the “Mediterranean Riviera.” The roots of the city’s makeover began when the mayor was able to open up large parcels of land at the southern entrance to the city, which includes the Poleg, Ir Yamim (Sea City) and Iris Reserve neighborhoods, to major developers.

One of those developers, Briga, has been at the forefront of the city’s residential building. It is a private real estate development company that has operated out of Netanya for nearly 40 years and has garnered a reputation for uncompromising quality. “You know, there are big-name builders out there who will sell projects to buyers, and when the apartment is ready, the purchasers will get the keys and that will be the end of it,” said Alona Orland, Briga’s director of sales and marketing. “Because Briga is a local builder of high-end projects, we care about every buyer or investor, and if one of our customers asks to move an electrical outlet or adjust something in the new apartment, we won’t charge them extra for it. Personal interaction and satisfaction is important to us because word-of-mouth is a strong marketing tool.”

Briga’s newest luxury residential project, Briga Towers, is located along the alluring Mediterranean coastline, situated right on the beachfront promenade. If you wish to swim in a more private environment, the development boasts an Olympic-size swimming pool. “We are not just selling apartments, we are selling an entire lifestyle with uncompromising standards inside and outside the building,” said Orland.

The Briga Towers project comprises two 34-story buildings, located between two nature reserves — the famous Iris Reserve to the location’s north, and the Poleg Shore Reserve to its south. The well-groomed leisure areas cover some 7,000 square meters for each tower, including gardens, top-end environmental development and a range of installations such as the pool, with shallow areas, floating suntan beds, bar, children’s playground, tennis court, and a private strip of sand facing the sea, which offers beach volleyball and more.

The lobby is outfitted with a luxurious reception area and seating designed for hosting business meetings, an elegant space containing a well-equipped bar, a quality children’s play area, synagogue, library and art gallery, high-end gym; all are available for residents’ use 24/7. The spacious apartments are designed to match the buyer’s personal requests. Each apartment includes floor-to-ceiling windows that bring the sea into your home from almost every window.

Prices for various mid-tower apartments range from about $1.5 million to about $8 million for upper-floor apartments and even higher for the limited number of penthouses. Many of the lower- and middle-floor apartments in Briga Towers are being snapped up very quickly. “Some of our buyers are Israeli couples who have sold their homes because their children have gotten married and moved out,” Orland said. “Others are younger, new immigrants with children, who wish to live in the lap of luxury, and we offer value for the money.”

The spectacular growth of Netanya has indeed made the city a prime locale for real estate investment. While the price of a four-room apartment in Modi’in rose by 10 percent during the past year, sans the sand, the price of a similar-sized unit in Netanya, with the ocean as an alluring inducement, has risen by 12 percent since 2015. ◆