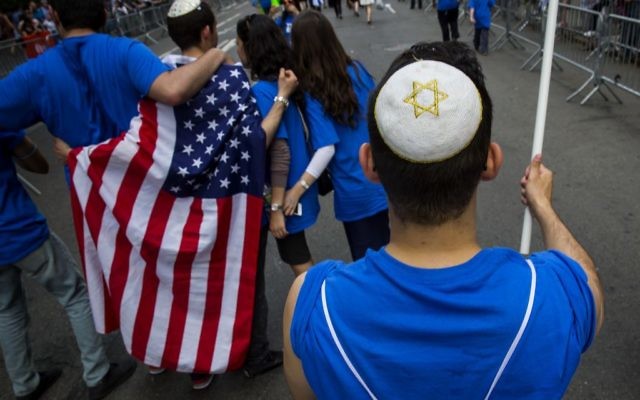 A participant marches in the Celebrate Israel Day parade in N.Y.C. in 2016. Relations between Israeli and American Jews has seen a growing rift lately. Getty Images

American Modern Orthodoxy is an elitist phenomenon. According to the well-known 2013 Pew study, it represents less than 10 percent of American Jews but is the best-educated and has the largest percentage of high-income earners. No group puts more of a premium on ethical life, intellectual curiosity, Israel, or community. In the aggregate, Modern Orthodox espouses more "essentials" of Jewish identity than any other segment, and by a wide margin. Its adherents are most likely to understand Judaism as both ethnicity and religion (a mature and correct understanding of reality). This is all in addition to the large families and high rate of day-school attendance that characterize Orthodoxy in general. As its name indicates, a multiplicity of emphases and core values is characteristic of Modern Orthodoxy.

It follows that if Modern Orthodoxy is elitist, it is also very expensive. An old joke within this segment of the community has it that day school tuition is the best form of birth control. Some writers have begun to notice as well: according to a widely-discussed article by Dmitriy Shapiro, families can find themselves struggling even with annual household incomes as high as $300,000.

That such large incomes are barely sufficient is only part of a larger problem. The other side of the coin is that Orthodox parents, as stated by the OU’s Nathan Diament in the Shapiro article, are “driven to higher paying professions,” specifically law, medicine, and finance. A community that constrains the career choices of its young people incurs a cost that cannot be measured only in dollars and cents.

In a 2012 essay, Rabbi Aryeh Klapper enumerated encouraging young Jews to pursue only those professions that will support the chosen lifestyle among several “moral” costs of rising day-school tuition. We can understand why pressuring someone into an unsuitable career would be considered immoral, but beyond the disservice to individuals, the community as a whole pays a steep price.

Take, for instance, the case of Joseph Cedar, an American-born acclaimed Israeli filmmaker who is observant. At first glance, he is a Modern Orthodox dream come true. Last year, during an interview, I asked him whether he thinks the same avenues would have been open to him had his parents not moved to Israel. Despite my fears that he would consider the question counterfactual and ridiculous, he responded that he asks himself the same question all the time, and that no, he does not think he could have managed his particular balancing act had he grown up in the United States.

That is, the pressure to produce high earners discourages and marginalizes those members of the community whose calling is in music, literature, the visual arts, or the performing arts. The problem is not only that creative types will likely be unable to afford the Modern Orthodox lifestyle; the community itself tends to marginalize those who pursue artistic careers, viewing them as irresponsible. Some creative types will gravitate toward the rabbinate or Jewish education, careers that can offer a creative outlet, financial incentive in the form of tuition reductions, and social acceptability. Many will either give in to the pressure to pursue a stable, lucrative career, or leave Orthodoxy behind.

Some will move to Israel, where artistic careers are more acceptable and where, despite the economic challenges it poses, Jewish religious education is free. The Jewish state is also home to a variety of high schools and colleges for the visual arts specifically geared to Orthodox students. Yarmulkes and other Orthodox paraphernalia are ubiquitous in Israel’s music scene—from classical on down—which in turn has been tapping into Jewish liturgical and poetic traditions.

In Israel, the head of a yeshiva is also a best-selling and award-winning novelist. In America, we get excited about holiday-themed a capella parodies, newly (and briefly) observant reggae artists, paint-the-parsha programs, and novelists who do not know the difference between Tosafot and the Tosefta but know and use a dozen Yiddish words for genitalia.

A reader might be tempted to ask: “So what?” As long as Modern Orthodoxy is producing rabbis, teachers, and enough big earners to support the community’s infrastructure and personnel, does it matter that it is not producing playwrights, poets, and pianists?

It does. Modern Orthodoxy is, or ought to be, a rich and challenging lifestyle that profoundly engages a broad range of thick Jewish experiences. It has a great deal to offer the Jewish world and the broader religious world. But without a vibrant creative class, there is no communal unpacking of that experience, no collective expression or catharsis, no mirror to show the community how it looks from the outside, no legacy of the community’s unique contributions.

There is a personal dimension here as well. Soon after moving to Israel, I changed careers, from the rabbinate to writing. For the most part, I earn a living by translating, yet I still aspire, even as I push 40, to become a full-time writer, and I hope that my writing challenges readers, sparks interesting and important conversations, and occasionally blows people away with its insight and wit. If I were to move back to the U.S., I would have to give up these pursuits—this calling—to sustain a Modern Orthodox lifestyle.

Is there a remedy, or will Modern Orthodoxy export and outsource creativity to Israel? Let this important conversation begin.

Elli Fischer is a frequent contributor to these pages.