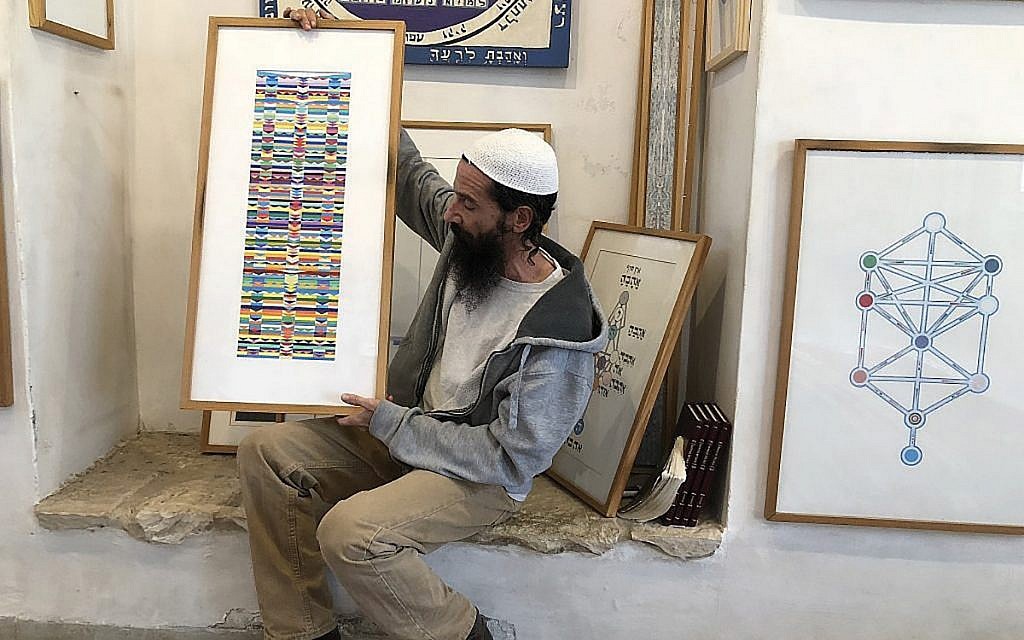 Let it be said that no one comes to Safed for the food. There may be hundred-year-old goat cheese and heavenly halva here, but bottom line, it’s the spirituality that has drawn tourists and seekers to the narrow, cobblestoned sidewalks and stairs of this ancient city for centuries.

It’s easy to feel the allure when gazing out at the undulating waves of Galilean mountains in the distance, tinged with a palette of blues or pink-tinted orange depending on the time of day. In fact, a couple of local tour guides explained, somewhat unconventionally, that the name Galilee is for the waves, or galim, of mountaintops in the region.

I recently spent two days wandering around Safed with my partner, at times guided, at other times on our own, with the personal challenge of appreciating this ancient city more than I had in the past.

The idea of a Safed sojourn came from Genine Barel, a former New Yorker who’s been living in Safed for the last 22 years, and now owns and runs The Way Inn, a peaceful boutique bed-and-breakfast with flowering courtyards in Safed’s Old City (thewayinn.co.il).

She had an ulterior motive, as she wanted me to see her inn. I told Barel that Safed wasn’t my kind of place; she said she liked nothing more than a challenge. The Way Inn represents a significant portion of her life work with her Israeli husband, Roni Barel. He’s a chef who provides the homemade cherry tomato jam, raised dough cakes, fresh salads and savory egg dishes served every morning, while Genine walks around, chatting with the guests. (He’ll also make dinner for a minimum of 20 diners, which is how we had hummus one night, and grilled meat the next.)

The Barels initially bought one of the thick, stone-walled structures as their private home, renovating and living there with their three kids. They created a kind of salon in their home, hosting Federation groups and other organizations, before deciding they were ready to open their own guesthouse. They spent five years renovating several surrounding structures that are now part of the inn.

The inn’s seven suites differ from one another in size, with rooms that can accommodate a family of six (young kids), and couples-only rooms with their own balcony or courtyard. Each is spacious and comfortably furnished, particularly the bathrooms, which are decorated with vibrant mosaics created by a local artist that turn the shower and bathtub walls into something spectacular. 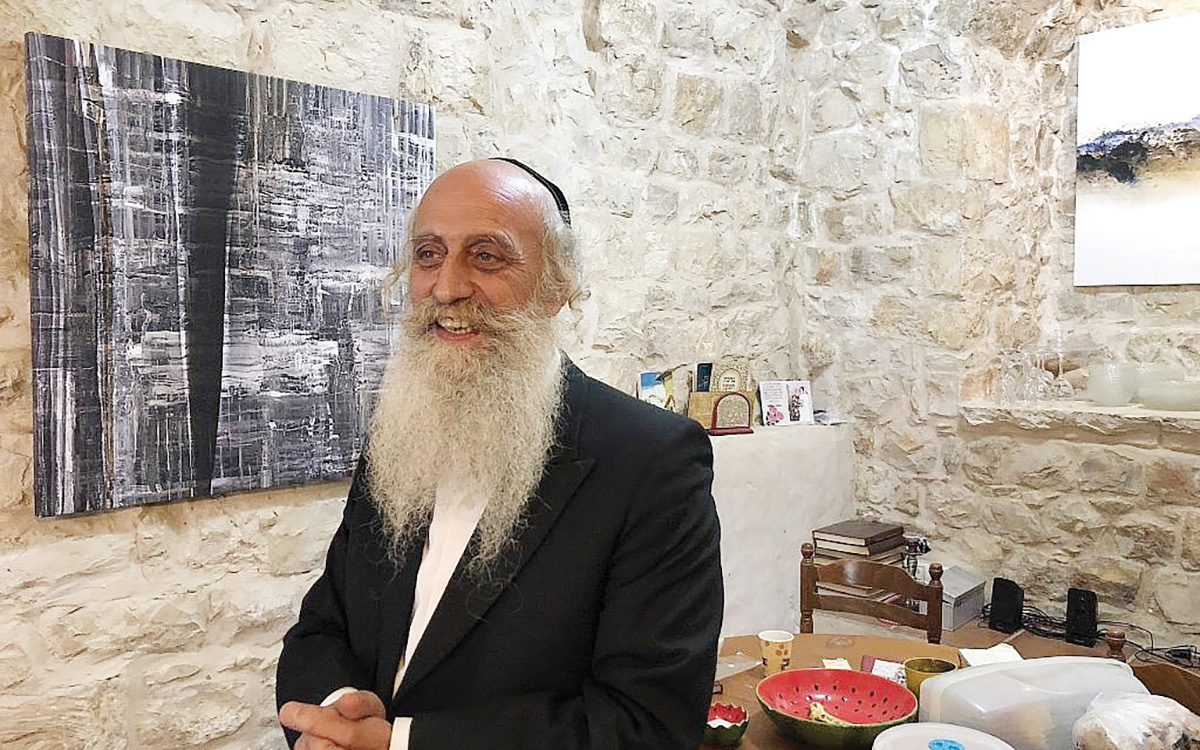 There are clever, warm touches, like the Kabbalistic ceramic signs that mark each room, the boxes of heavenly buttery cookies made by Roni Barel and placed in each room’s kitchenette, and the bottles of Klil natural shampoo, conditioner and body gel in the shower. Privacy also abounds here, but it can be eschewed in favor of Barel’s meditation seminars and art workshops or a family event.

It’s all representative of Barel’s adopted town, which she and her husband chose after meeting and traveling in India seeking something more spiritual than their respective birthplaces.

“This place is part of our spiritual path as a couple,” said Barel. “It’s a way in to Safed, to the vibe of Safed. We wanted to challenge people’s consciousness, to expose people to Jewish mysticism.”

Safed — at least the ancient part of this city — is really an artsy village that has always beckoned to artists, painters and sculptors who are inspired by its mystical flavor. It drew others as well, medieval Talmudists and Kabbalists, and in the last decades, spiritual seekers who move to this mountaintop city to find what they hadn’t discovered elsewhere.

Barel introduced us to Rabbi Meir Sendor, an Orthodox pulpit rabbi with a doctorate from Harvard in medieval Jewish history focusing on Kabbalah. Sandor immigrated with his wife to Safed from Sharon, Massachusetts, about two years ago.

“I wouldn’t have moved anywhere else,” said Sendor, who now runs Tal Orot meditation seminars in Safed and elsewhere in Israel.

He reminded us of who once walked these passageways — Kabbalists Isaac Luria and Moshe Kordovero, Joseph Karo and Shlomo Halevi Alkabetz — and then took us to meet some local artists.

“This is one of the most spiritual places in the world; it’s a place of primal wisdom,” said Sendor. “The air of Safed — something happens here, it’s enlivening; all sorts look for spirituality.”

Sendor led us to artist Yoel Tordjman, a French artist who settled in Safed and lives in a century-old house with thick stone walls.

Tordjman is a Bratslav chasid, black-hatted and black-suited with a long, gray beard and bright, piercing eyes. Every wall of his simple home is hung with his works, including the kitchen. Across from the oven a painting depicts an extreme close-up of a book, allowing the viewer to catch a glimpse of what lies between the pages. The next wall is hung with a verdant scene of greens and pinks, painted during one of Tordjman’s sojourns in nature.

A work by Yoel Tordjman, whose method of overpainting with oil yields wondrous glimpses into his universe (Courtesy Yoel Tordjman)

He also paints his innermost thoughts on Kabbalah, the mystic ancient writings that occupy so many of Safed’s residents. One of his Kabbalistic works is a black streak, deep and striated, full of as much light as darkness.

“Light is just an experience of the dark,” he said. “Night isn’t the end, it’s the start, it’s multiple movements.”

His painting involves a complex process of repeated overpainting to create deeply abstract works. He calls it a 3-D process dating from the 15th century.

For him, Safed is the inspiration, one that he doesn’t take for granted.

A similarly mystical approach is seen from artist Abraham Loewenthal, a 49-year-old graduate of the Art Institute of Chicago, who has been living in Safed since 1994.

His artworks are bright and modern — long, crisp columns of geometric patterns that are his Kabbalistic mapping of the patterns of the shofar’s sounds.

“The pattern isn’t a Morse code,” said Loewenthal, whose Old City gallery is open to visitors. “It draws on all the emotions, the divine plan. The art is a form of worship to God.”

The artistic soul resided in Eyal Karoutchi as well, a highly personable tour guide who looks like Tevye and spent more than a decade on a tropical island off the coast of Thailand practicing Buddhism, before rediscovering his Judaism from a Chabad rabbi, returning to Israel and coming to Safed.

He took us into the depths of the underground passages and rooms discovered under Livnot U’Lehibanot, a post-college education program that has long made its home in Safed and whose volunteers have been slowly digging out the ancient warren of rooms.

Now they’re slowly figuring out how best to utilize the mysterious spaces.

“It’s classic Safed,” said Karoutchi. “We get to things, it just takes time.”

In the afternoon, as we made our own way around the city, we found the tucked-away dairy of the Kadosh family, makers of soft and hard goat and sheep cheeses, as well as divine hunks of sesame-sweet halva, for 100 years.

On our way back to The Way Inn we heard drums and chords emanating from an intricately sculptured metal door, which turned out to be the entrance to the Mamaqat Music Center. It’s a relatively new endeavor that teaches Andalusian music to some 70 musicians, housed in a 700-year-old restored khan, or hostel.

The musicians, like the painters and craftspeople around them, soak in the atmosphere of this city, said Maxim Benabu, an Israeli promoter who partnered with founder and funder Moshe Tov Kreps to run Mamaqat.

Kreps, an American, purchased and renovated the khan, later establishing his conservatory based on the systems of classical Persian, Arabic and Ottoman music, as well as North African and contemporary Mediterranean music. (They have fairly regular performances at the khan, publicized through their Facebook page.)

“No other school does this,” said Benabu. “It’s the ingathering of the exiles here. I’m living the dream.”

There are former Deadheads too, in Safed, and some of those acolytes of the venerated San Francisco band gather weekly at Andy Alpern’s Mystic Mountain Brewery, a cave-like bar that serves Alpern’s porters, ales and stouts, as well as deep bowls of soup at the Thursday night jam sessions.

“Everyone ends up here,” said Alpern, who came to Israel from Chicago in the mid-1990s and now lives with his family in Safed. “It’s just that kind of place.”