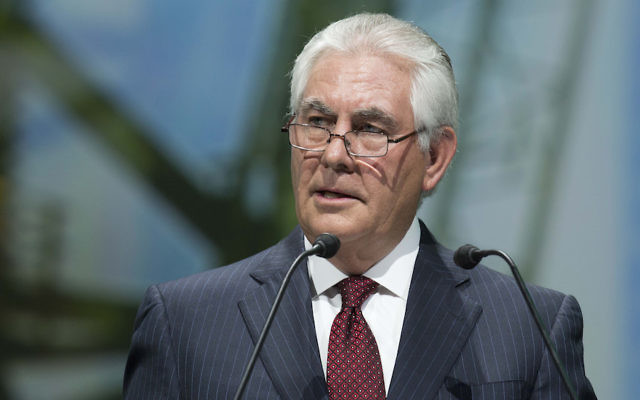 One day after Israel said it is not aware of a change in Palestinian policy, Secretary of State Rex Tillerson reiterated today the private assurances he received from Palestinian officials that they would be ending their monthly payments to imprisoned Palestinian terrorists convicted in Israel of murder.

“Those were assurances that were given to me in the most recent trip to Bethlehem,” Tillerson said in testimony before the House Foreign Affairs Committee. “They have indicated they would, they have indicated to me they were in the process of changing that.”

But at another point, Tillerson suggested that it was not quite a done deal, saying the U.S. was still in “active discussion” with the Palestinian Authority about the matter.

But the Israeli newspaper Haaretz quoted a PA official as denying the payments would be stopped, saying they are essential for the PA’s existence.

“Almost every other household among the Palestinian people is the family of a prisoner or martyr,” said Issa Karaka. “Anybody who thinks he can execute a decision like that is badly wrong.”

Morton Klein, president of the Zionist Organization of America, said he would not believe the payments are ended until the Palestinian parliament “meets and rescinds this disgraceful law” and Palestinian President Mahmoud Abbas makes a “public speech announcing this to the people.”

He added that guarantees would also have to be made to President Donald Trump that no third party would provide the payments, which total $1.1 billion over four years.

Tillerson said he was seeking the assurances in advance of the resumption of Israeli-Palestinian peace talks that the U.S. administration would like to see resume by the end of the summer.