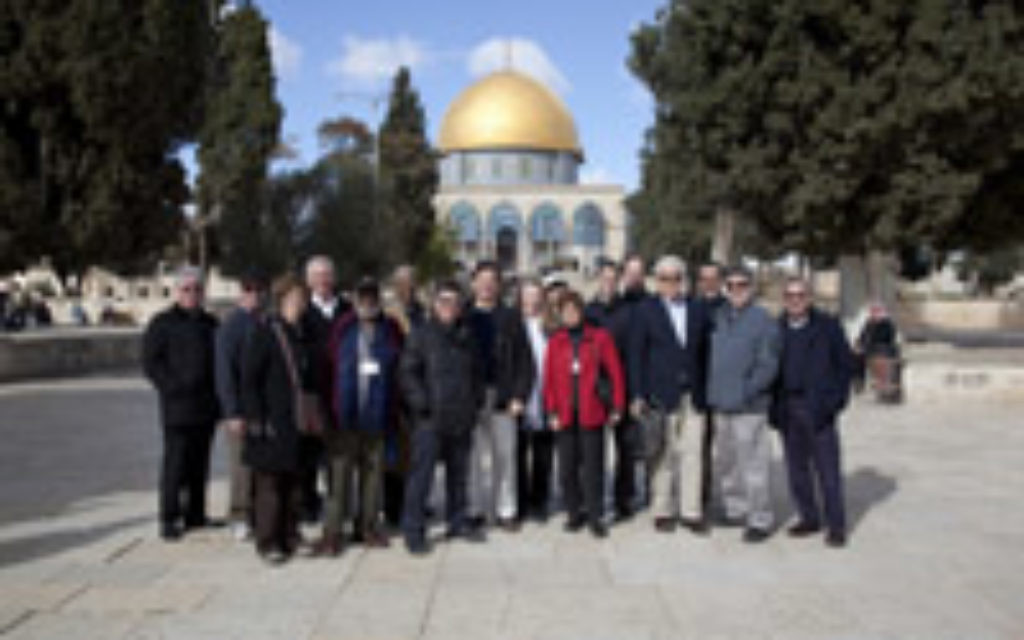 During the public debate last year over the planned Park 51 Islamic community center — often referred to as a mosque — near the former site of the World Trade Center in lower Manhattan, Rabbi Ammiel Hirsch delivered “quite an impassioned sermon” at the Stephen Wise Free Synagogue, the Upper West Side congregation where he has served as spiritual leader since 2004.

After finishing his remarks about the need for religious moderation, some members of the temple approached him. “Are you satisfied just talking about it?” they asked.

The congregants challenged him to develop a program that would bring together leaders of Judaism, Islam and Christianity to serve as a model of ecumenical cooperation.

The result was a “Senior Religious Leaders Interfaith Mission to Israel” supported by philanthropic members of the congregation and led by Rabbi Hirsch last month. For five days, 16 hand-picked leaders of major congregations in Manhattan — Jews and Muslims, Catholics, Protestants and a Unitarian — traveled around Israel and the Palestinian territories, meeting with representatives of the three major monotheistic faiths.

The mission, which took place in the shadow of the continuing stalemate in the Middle East peace process and of forthcoming votes by two major American Christian denominations on economic divestment from Israel, has already borne fruit, Rabbi Hirsch says. Some of the clergy, open to interfaith dialogue before they joined the mission, now have increased their activism, the rabbi says.

One of the Muslim participants says he will incorporate lessons from the mission into a comparative religions course — a balanced course that presents the perspectives of Judaism, Christianity and Islam — at a New Jersey university where he teaches.

And Stephen Phelps, senior minister at the Riverside Church, says he will speak out against the Presbyterian denomination’s consideration of an anti-Israel resolution at a national conference this summer.

“The trip … to Israel/Palestine did not change my mind, but confirmed my view that increased investment in the West Bank is the policy to pursue, not disinvestment from the State of Israel or from certain companies with activities in the West Bank,” he told The Jewish Week in an e-mail interview. “I will not have a voice or vote in the national assembly of the Presbyterian Church USA this summer, but will express my view in other venues.”

Rev. Phelps’ church is interdenominational, but his roots are Presbyterian.

As part of the continuing anti-Israel Boycott, Divestment and Sanctions (BDS) movement, the United Methodist Church’s General Conference in April and the Presbyterian Church’s General Assembly in July are to consider motions to divest from three U.S. corporations that sell to the Israeli government — Caterpillar, Hewlett-Packard and Motorola Solutions. The Presbyterian motion condemns what it calls Israel’s “non-peaceful pursuits and human rights violations.”

Rev. Stephen P. Bauman, senior minister of Christ Church, a Methodist institution, was unavailable for comment this week, in mourning for his mother who died last week. But the report he wrote on his church’s website commented favorably on conditions he found on the West Bank — despite news reports that often picture Israel’s “occupation” as stifling and inhumane.

“Driving into Ramallah through the barrier walls — the current capital of the [Palestinian] Authority — I think most of us were surprised to find a rather bustling urban environment with lots of excavating, building projects and sparkling new structures,” Rev. Bauman wrote. “There has evidently been movement within the economy of Ramallah, and perhaps to a lesser degree, in other parts of the West Bank. Contrary to media imagery, it seemed perfectly safe with the obvious, but nevertheless discreet presence of the Authority’s police.”

Since returning from Israel, several of the participating clergy have related their experiences and observations in online messages and in-person speeches.

And some members of the mission took part in a panel discussion last week at the Stephen Wise Free Synagogue, offering a nuanced description of their visit and of the lessons they learned from Israelis and Palestinians.

This is typical, say observers familiar with similar interfaith missions to Israel that a wide range of Jewish organizations have sponsored for several years. Americans who learn about the Middle East situation only from the media “really change how they view the situation” when they see the country firsthand, said Rabbi Robert Kaplan, who coordinates interfaith activities for the Jewish Community Relations Council. Those who had previously seen the Israeli-Palestinian impasse in black-and-white terms see in Israel how “complicated” it is, says Ethan Felson, vice president of the Jewish Council for Public Affairs.

“Over the course of the few days there were moments of deep hopelessness as we heard leaders who professed vastly different historical narratives, narratives that cannot be reconciled,” Rabbi Elliot Cosgrove of Park Avenue Synagogue said in a subsequent sermon.

“I have a much deeper appreciation of why Israel matters to Jews as a place of refuge,” says Rev. James A. Kowalski, dean of The Cathedral Church of Saint John the Divine.

“I learned that the situation is much more complicated and confusing than I had thought,” said Rev. William Heisley, pastor at Holy Trinity Lutheran Church. “I have been telling stories from my trip in my preaching and will lead a congregational seminar on the trip in February or March.”

Rev. Galen Guengerich, senior minister of All Souls Unitarian Church, in a sermon called the mission — a “whirlwind of presentations by leading journalists and academics, meetings with religious and political leaders, and excursions to places of interfaith vitality and internecine hostility” — an education in conflicting but similar points of view. In his sermon, he compared the group’s meetings with Israeli Prime Minister Shimon Peres and Palestinian Authority Prime Minister Salem Fayyad.

“In Israel and the Palestinian Territories everyone has a story of pain,” Rev. Shari Brink, executive minister of the Marble Collegiate Church, told The Jewish Week in an e-mail interview. After her return from the recent Israeli mission, she discussed the trip during her church’s regular Sunday post-worship Spiritual Growth Hour. Her presentation that Sunday “was one of the best attended … we have ever had.”

In their remarks last week at Rabbi Hirsch’s synagogue, mission participants reported that one of the most moving moments of the trip was a meeting with Ronit, a grandmother who lives on a moshav near Israel’s border with Gaza. The moshav is subject to frequent shelling by Hamas terrorists in Gaza; the last attack had taken place the week before the New York delegation came.

“She was upbeat, despite the unyielding anticipation of unpredictable danger,” said Shaykh Ibrahim Abdul-Malik, a career educator who teaches at Fairleigh Dickinson University in Teaneck, N.J., and is a co-founder of the Imams Council of New York.

“She is keenly aware of the intransigent nature of the conflict,” said Shaykh Abdul-Malik, who visited Israel for the first time on the mission. “Her advice to us? She pleaded that we not take sides, but that we listen openly.”

A teacher of religion at FDU, Shaykh Abdul-Malik is working on an updated curriculum for the “One God, Three Paths” course he co-teaches — with Christian and Jewish clergy — and said he will “continue speaking within and outside of my community, inshallah [God willing],” on the need for interreligious dialogue.

His college course is “not about propaganda — we are teaching about the Abrahamic faiths,” Shaykh Abdul-Malik says. “We are not about opinions.” He says his course will include his insights from Jews and Muslims he met in Israel.

Rabbi Hirsch called the mission the first one that featured clergy only from prominent Manhattan congregations, with visits to both Israeli and Palestinian sites. Covered by the Israeli press, the mission will be the focus of a documentary, produced by Stephen Wise Free Synagogue, to be released this spring.

The rabbi said he is thinking of arranging another such mission, with interfaith clergy from congregations across the country.

Other results won’t be evident so soon, the rabbi says. “Education is a long-term process.”