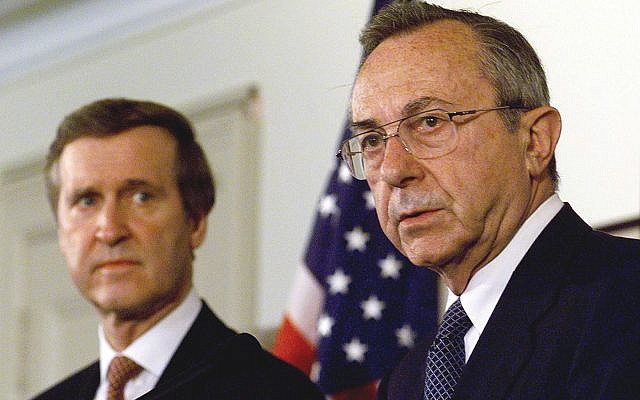 Moshe Arens, who died this week at 93, was mourned not only for his lifelong service to Israel in such roles as defense minister (three times), foreign minister and ambassador to the U.S., but for his sterling reputation as a man of principle.

In eulogizing his friend and mentor, Israeli President Reuven Rivlin said, “You were a man of a single principle. Your principles derived from an understanding that you believed with all your heart: the basic belief that the State of Israel can only be democratic and Jewish, Jewish and democratic, and that the burden of proof falls on us alone.”

Arens was one of the last surviving founders of Israel’s right-wing Herut Party, a precursor to Likud. He was a fervent ideologue who opposed the 1978 Camp David Accords, the 1993 Oslo agreement and the 2005 unilateral withdrawal from Gaza, asserting that the burden was on the Arabs to prove they want peace, not on Israel. As a young man he was a member of the militant Irgun and a leader of Betar, the Revisionist movement founded by Ze’ev Jabotinsky.

But Rivlin noted in his eulogy that Arens “believed that Israel’s obligation to include its Arab citizens was its first priority, even before the need for a political agreement, and that it was essential for all our futures.”

Arens was widely respected beyond his political allies for his lifetime role as a savvy visionary and effective leader in protecting Israel’s security while helping to broaden its horizons. He wrote in a memoir published last year of taking pride in Israel’s military and economic self-reliance “while simultaneously fulfilling its declared mission and absorbing millions of Jews in need of a haven.”

Such statesmen are all too rare today in an increasingly binary political atmosphere where in recent days Israeli politicians have been abandoning longtime political partners in a mad scramble to forge a winning alternative to long-serving Prime Minister Benjamin Netanyahu. The prime minister has called for national elections in April. Faced with the strong possibility of an indictment before then on corruption charges on several fronts, he took to prime-time television Monday night to proclaim his innocence, blaming the police, state prosecutors, the press and political adversaries for a “witch hunt” against him.

It was Moshe Arens who served as a political mentor to Netanyahu, recognizing his talents and encouraging him to enter politics in the early 1980s. On Arens’ death, his one-time protege said of him: “I loved you as a son loved his father.”

Their paths veered politically, though, and in personal style.

It’s no wonder that prominent figures like Arens, a defender on the right, and Amos Oz, the man of letters on the left, are remembered by Israelis now as from the past — not so distant chronologically but much removed from the transactional nature of the public square today.

They and their firm convictions, different as they may be, are already missed.