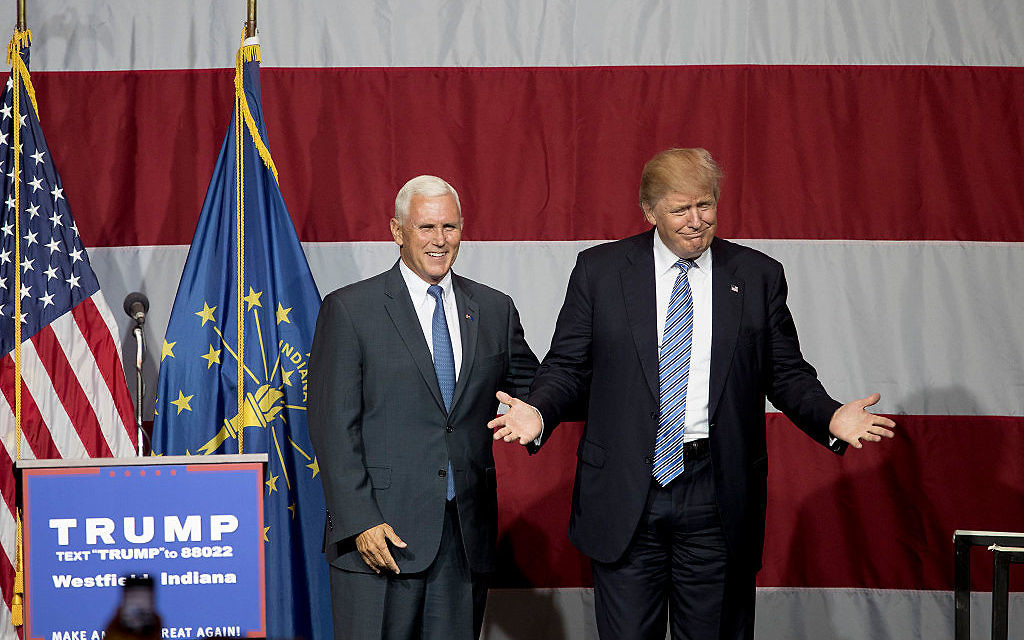 Indiana Gov. Mike Pence, the dark-horse choice for Donald Trump’s running mate who The New York Times suggested would be tapped to serve with the billionaire businessman on the Republican presidential ticket, has had a strong record of support for Israel during his years as governor and a member of the House of Representatives.

Pence, 57, who has served as governor for three years, visited Israel on a trade mission in 2014, meeting with Prime Minister Benjamin Netanyahu and other political leaders, and fueling speculation about his presidential ambitions.

The Times reported Thursday that the Trump campaign had signaled to top GOP leaders that Pence would be his vice presidential pick.

His possible selection is seen as a boon to the election prospects of Trump, who lacks experience in overseas affairs, including the Middle East. Rumors about his chances to be Trump’s vice presidential pick increased last week when the pair campaigned together.
Pence has maintained a strong relationship with AIPAC, the Washington-based pro-Israel lobbying organization.

A political conservative, he was a member of the House in 2001-13, where he advocated strong military defense aid for Israel. This year he signed a bill that would divest his state from local businesses that take part in the anti-Israel BDS (boycott, divestment and sanctions) movement.

Despite coming from a state with a small Jewish population (about 17,000), he was a vocal critic of the nuclear accord the United States signed with Iran last year, calling it “deficient” and a threat to Israel.

He has close ties to the GOP’s Christian conservative wing and has said his support for Israel is rooted in his Christian faith.

At last December’s Republican Jewish Coalition conference, he said, “Israel’s enemies are our enemies, Israel’s cause is our cause.”

Last month Pence hosted the second annual Indiana-Israel Business Exchange, where he said “Israel and Indiana share many concerns that Hoosiers cherish. As our nation’s strongest and most important ally in the Middle East, Israel is also a key partner in our state’s economic growth.”