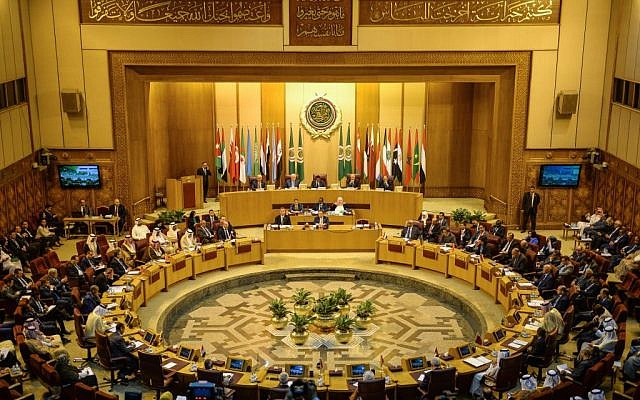 Members of the Arab League hold a meeting at the grouping's headquarters in the Egyptian capital of Cairo to discuss the latest developments in the Palestinian territories, on April 21, 2019. Getty Images

The Trump administration’s effort to present an Israel-Palestinian peace plan in stages, beginning with major economic incentives to the Palestinians, has been met, not unexpectedly, with negative responses from the Palestinian Authority a month before the U.S.-led conference is scheduled to take place in Bahrain. In part the early rejection of the much-heralded, much-delayed plan is due to the administration’s apparent decision not to deal with the Palestinians’ insistence on a state of their own alongside Israel, a component that had been the central goal of previous U.S. peace proposals.

But President Trump, in promising the ultimate “deal” between Israel and the Palestinians, has said that all of those land-for-peace efforts ended in failure and it was time for a bold new approach. His son-in-law and senior advisor Jared Kushner, along with Jason Greenblatt, the administration’s special representative for negotiations, have been working diligently to drum up support among allied Arab and Gulf states, like tiny Bahrain. But even reports that wealthy Arab countries would contribute as much as $70 billion for investment and infrastructure in the Palestinian territories did not appear to appease Palestinian political and business leaders. They insist that key political issues on borders, Jerusalem and the status of Palestinian refugees must be part of the discussion. Palestinian officials described the U.S. plan as “blackmail,” an attempt to deepen the Palestinians’ financial crisis and then force them to accept money instead of national rights.

It has also been noted that the administration was not committing to contribute significant U.S. funds to the project.

In large part, the problem is that the U.S. lost credibility with the Palestinian Authority as a fair broker after the administration announced in December 2017 that it would move its embassy in Israel from Tel Aviv to Jerusalem, which it did last year. The administration has also cut funds for the PA and made known its solid support for Israel on a range of issues.

The Trump approach appears to bypass the Palestinian Authority altogether and have Arab states pressure the PA to make a deal with Israel. But history has shown that Arab pride trumps practical logic in such dealings, which has resulted in several generous Israeli offers being rejected by Palestinian leaders. At some point, a serious commitment for major funding to the Palestinians may be persuasive in achieving progress on the peace front. But not, it seems, without some political skin in the game from Jerusalem.