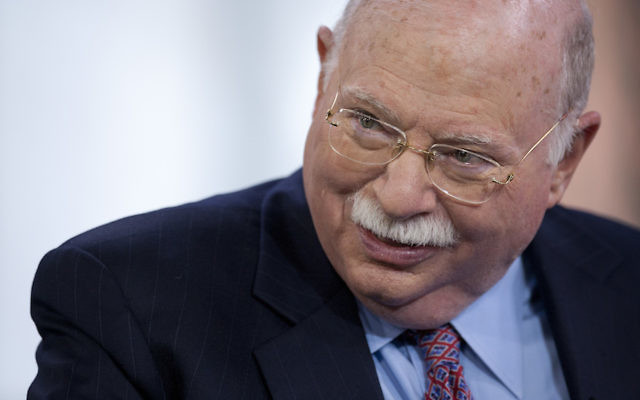 Mt. Kisco, N.Y. (JTA) — Michael Steinhardt has poured millions of dollars into ventures for American Jews. But he’s no fan of American Judaism.

The hedge-fund billionaire turned mega-philanthropist is best known as the founder of Birthright Israel, the 10-day free trip to Israel for Jewish young adults. More recently, he’s founded a network of publicly funded Hebrew-language charter schools. His latest endeavor is a natural history museum at Tel Aviv University that will host exhibits on the flora and fauna of Israel and the Middle East.

JTA visited Steinhardt at his New York estate, where he spoke about why he thinks American Jewish education needs to change, what to do with the hundreds of thousands of Birthright alumni once they return home, and why he’s not worried about college students who rail against Israel.

JTA: You’ve spoken a lot about how the American Jewish community needs to promote secular Jewish culture. Is that what you’re trying to do with your network of charter schools? Can that work if the schools are publicly funded and most of the students aren’t Jewish?

Steinhardt: These are charter schools, and as charter schools they are open to anyone and they have, on average, no more than 50 percent Jewish students in the school. But these schools teach Hebrew in a way that is demonstrably superior to Jewish day schools.

And you prefer it that way, as an atheist?

I don’t think you came here to talk about my theology, but it’s temping me to say I truly believe that the time of Jewish history that we have to devote far more energy to is the last 300 years. The last 300 years is the most enlightened — it is when Jews really shined. I would use the word superior, except people blanch when I use that word. But it’s really what I mean: Jews have accomplished so much, so inexplicably out of proportion to their numbers, in these 300 years, and it’s one of the great failures of Jewish education that that’s not focused on at all.

Israel is also getting more religious, and you’ve criticized its government and business world. Why do you feel so positively about Israel if it has some of the same flaws you criticize in American Jewry?

The modern state of Israel is the Jewish miracle of the 20th century, but it’s the secular part of Israel that’s the miracle. It’s the extraordinary achievement, it’s the technology, the military, the development of a society out of nothing using Zionist ideals, taking people from terrible places and making them Israeli citizens. Israel has become, for me, the substitute for religion.

Are you worried that that secular society is not nearly as dominant in Israel as it was 40 years ago?

The people I know in Israel are overwhelmingly secular. Tel Aviv University, the natural history museum, are truly modern, secular institutions. I’ve been critical of a few things in Israel, [but] Israel is to me the most moral state on this planet, [even] with the occupation, with the differences between rich and poor, with the other issues… but it’s really an exceptional place.

I have a house in Jerusalem and I like Jerusalem a lot, but if you go to Tel Aviv, it’s a phenomenal world. It’s a world unto itself.

More than half a million young Jews have gone on Birthright, but when they come home they’re caught by the same Jewish institutions you’ve criticized. Is that an issue?

Guess what? They don’t succeed in catching them. The way I dealt with it, and still deal with it, is to create Birthright post-programming.

But it’s a real issue. There are all sorts of things to deal with. There’s 60 to 70 percent intermarriage rates [among young non-Orthodox American Jews], a falloff in synagogue attendance. There’s all sorts of things like that. There are no easy answers, but the best answer to date is Birthright. I’m tempted to say it has saved a generation.

But there are reports that Birthright’s numbers are shrinking. It recently began accepting applicants who attended an organized Israel trip in high school. Why is that?

The numbers we’re taking this year will be a record. If you’re saying we used to have huge waiting lists and we don’t anymore, you’re absolutely correct. I think Birthright has almost become a community norm and a large percentage of the age cohort of 18 to 26 go on Birthright.

Having trips to Israel has become a popular engagement for the Jewish world and that may be one of the reasons we don’t get the huge excess of waiting lists.

I think I’m too old, too ornery to be a believer that 10 days, Birthright, can change your life. You can’t imagine how many people come back and say, ‘This has changed my life.’ But it’s still 10 days, and they’re 18 or 21 or 26. Has it really changed their life? I don’t know.

Do you see criticism of Israel’s policies as a threat to Birthright’s impact on Jewish college students?

You can’t avoid that being part of the message. Israel is a complicated place in a strange part of the world and there are plenty of issues to deal with. There are a substantial number of Jews who believe that Israel should leave the settlements, leave the West Bank.

I think most of us understand the occupation for what it is and what it isn’t. The more one understands about Israel, the more comfortable one becomes with the politics of the Israeli government.

This interview has been edited for length and clarity.