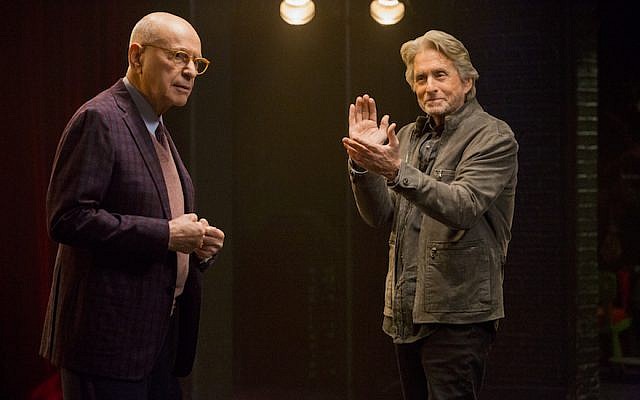 (JTA) — “The Kominsky Method” is the wisest and saddest new comedy on television. That might be its biggest problem.

The protagonist of the eight-episode Netflix series that debuts Friday is Sandy Kominsky (played by Michael Douglas), a Jewish Tony Award-winning actor who landed with a thud in Hollywood. He no longer acts for a living but teaches the craft to students using the titular “method.”

Their friendship and the ways they navigate a hilarious and poignant battle against Father Time drive the show, which is moving and brave. Netflix has invested considerable effort in a series that likely will appeal to a limited demographic (Douglas, Arkin and show creator Chuck Lorre don’t come cheap).

The target audience is clearly of the older variety. At one point, Newlander says, “I wake up each morning and my first thought is, ‘What part of me isn’t working?’” At another, guest star Danny DeVito, playing a urologist, snaps on rubber gloves and turns to examine a bent-over Kominsky while saying “You complete me.” Kominsky has been married three times and is finally happy about dating someone more his age.

Will millennials give this show a shot? Will AARP members take a chance on a series that is so deeply rooted in their own often depressing reality?

If they don’t, they will miss out on an extraordinary dramatic comedy television experience. In a season where most of the new sitcoms are virtually unwatchable — “Murphy Brown” isn’t quite what she used to be, and “Rel” is really bad — “The Kominsky Method” is uplifting in its intelligence.

Lorre, the Dick Wolf of comedy, is best known for more traditional TV sitcoms such as “Two and a Half Men,” “Dharma & Greg” and “The Big Bang Theory.” But “The Kominsky Method” is different from his other shows — it’s much more personal and mature. The show’s two main characters are Jewish, also a first for the prolific Jewish writer and director.

Lorre is known for including vanity cards, or short essays and observations, at the end of his shows. They flash for just an instant, and hardcore fans pause the show to read them. In 2011, he wrote No. 327 from Israel, where he said he felt strangely at home.

“[F]or the first time in my life, I’m surrounded with DNA much like my own,” he wrote. “Until I got here … I didn’t realize how much my double helix yearned to be around similar strands.”

At one points he wonders, “Why did I spend a lifetime moving away from that group? How did Chaim become Chuck? How did Levine become Lorre?”

Except for a synagogue and shiva sequence, there isn’t much outwardly Jewish about “The Kominsky Method.” But Lorre’s particular strain of the double helix comes through more subtly in dialogue like Arkin’s declaration: “We’re civilized people. We keep our shame and suffering to ourselves, where it belongs.” 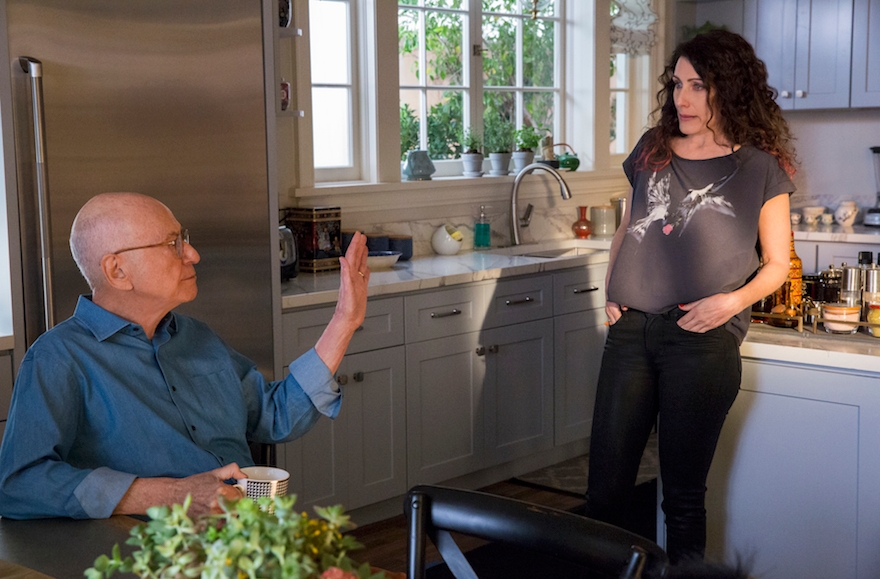 “A spaceship is taking old people into space. That’s the happy ending for old people. I saw it 30 years ago,” he says. “But it’s a whole different perspective when you’re in the demographic.”