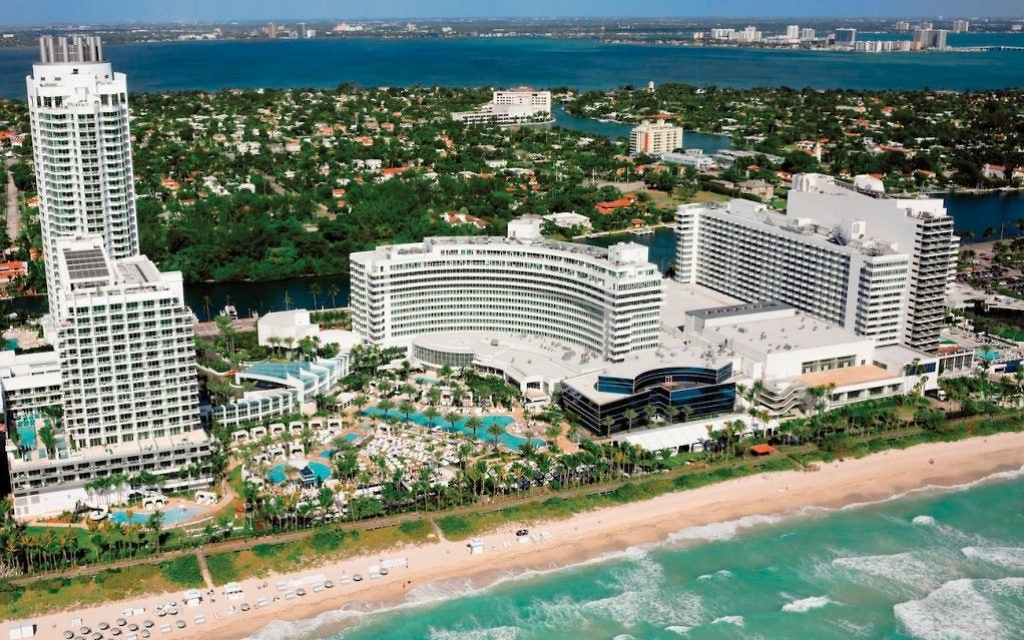 Miami Beach, Fla. — Everyone knows that Jews and Miami Beach go together like horseradish and gefilte fish. Matzah balls and chicken soup. Corned beef and rye. Chopped liver and … you get the picture.

But not having been to the Miami area for more than 30 years, I was still in for a bit of a shock when I arrived on the shore of this sunny isle in winter. Sure, I expected some Jews, a synagogue here or there, a kosher restaurant or two.

What I did not expect was to see stocking-wearing Holocaust survivors hobbling on the boardwalk amid bikini-clad joggers and tattooed men in too-short shorts. Or a hotel with a daily minyan populated largely by chasidic Jews with long black coats and side curls.

Fortunately, I was also lucky enough to get what I expected when I booked my ticket to Florida for January: Warm weather, sunny skies and sandy beaches.

There’s a reason Miami Beach has become a mecca — er, Jerusalem — for Orthodox vacationers. First, there are the elements that appeal to all pleasure seekers: sand, surf and sun.

But because there’s also a vibrant local Orthodox community here, there also are a dozen or so kosher eateries — from a hot dogs and beer place called House of Dog to Chinese restaurants, pizza shops, sushi bars, Mideast grills and steakhouses. Beachside hotels accommodate Sabbath observers with old-fashioned house keys in place of electronic key cards. And there are a plethora of synagogues within walking distance.

The eruv enclosure, which enables Sabbath observers to push strollers and carry keys on Shabbat, runs far enough east to include the boardwalk along the beach (though not the beach itself).

What distinguishes Florida from Israel is the live-and-let-live spirit that reigns here. In Miami Beach, haredi Orthodox Jewish women lounge by the pool alongside Spanish tourists dressed in Speedo bathing suits. That kind of coexistence is hard to come by in Israel.

Until Spain traded Florida to Britain in exchange for Havana in 1763, Florida was subject to the laws of the Spanish Inquisition, and Jewish residents were forbidden. When Jews began settling in the area in the 19th century, landlords and business owners routinely posted “Gentiles Only” signs on their properties. Such discrimination persisted into the 1950s.

“Always a view, never a Jew,” read one hotel advertisement from the 1930s. Another, from the Coronado Hotel, read: “Air-conditioned rooms available. Oceanfront luxury at low cost. Gentile clientele.” Others made do with the somewhat subtler “Restricted Clientele.”

The first synagogue in Miami Beach, Beth Jacob, was built in 1929 on Washington Avenue between 3rd and 4th streets, because at the time Jews were not allowed to live north of 5th. The building, which operated as a synagogue until 1986, has since been turned into the Jewish Museum of Florida. It’s worth a visit just to see the beautiful sanctuary where Jewish gangster Meyer Lansky used to pray, but the real treasures are the exhibits offering a fascinating glimpse into the history of this uniquely American Jewish community. Plus, the museum is in the heart of South Beach, the storied neighborhood that is itself worth a trip for its nightlife, beaches and art deco architecture.

Perhaps the saddest event in the city’s Jewish history came in 1939, when the S.S. St. Louis, after being turned away from Cuba, dropped anchor in the ocean close enough to Miami Beach that the ship, filled with German Jewish refugees, was within view of the synagogue. But President Franklin Roosevelt refused entry to the hundreds of passengers trying to flee the Nazi onslaught, and the ship sailed back to Europe. About half its passengers would die during the Holocaust.

The Eden Roc Miami Beach, an art deco gem located on Collins Avenue in the 46th Street area, is one of two Miami Beach hotels with an in-house kosher kitchen. The idea behind the $1 million kitchen — which opens for bar mitzvahs, weddings and, of course, Passover — isn’t just to offer better food but to send a message.

“We want you to know that kosher or not, your food and your experience is valuable to us,” said David Siguaw, Eden Roc’s director of sales and marketing.

The food isn’t the only reason to stay at the Eden Roc (the hotel hosted my visit). The 631-room hotel underwent a $240 million renovation in 2009 that added a new tower and gave a fresh feel to its expansive rooms, multiple pools and hot tubs, spa, and bars and restaurants. The prize, however, is the view. From the wicker lounge chairs on your balcony, you can take in the azure water, the golden beach and the hotel towers that line the island.

Both the Eden Roc and its next-door neighbor, the Fontainebleau, were designed by architect Morris Lapidus, the Russian Jewish immigrant perhaps most associated with the Miami Beach hotels that went up in the 1950s.

The Fontainebleau, which underwent its own $1 billion renovation in 2008, is like a flotilla of cruise ships. Spread out over 22 acres — the largest single property in Miami Beach — the landmark hotel has 1,504 rooms in four towers; six restaurants, including its own butchery, pastry shop, fishery and chocolatier; a dozen pools and hot tubs, the biggest of which has 325,000 gallons of water in the hotel’s signature bow-tie shape; and one of Florida’s most popular nightclubs, Liv, which on Christmas Eve played host to Miami Beach’s popular “Matzo Ball.”

On Passover, the Fontainebleau clientele is about two-thirds kosher, with 1,200-1,500 kosher-observing guests. Joseph Gerbino, the hotel’s public relations director, says part of what makes the holiday at the hotel unique is seeing tattooed non-Jewish guests sharing poolside lounges with visibly Orthodox Jews.

Staying at the hotels does not come cheap. In winter it’s tough to find rooms for less than $300 a night at either the Eden Roc or the Fontainebleau. But there are plenty of acceptable alternatives up and down the strip, some in the $200 range (not including exorbitant overnight parking fees of $30 or more).

Or you can just stay on the pullout couch at your Uncle Morty’s condo in Boca.