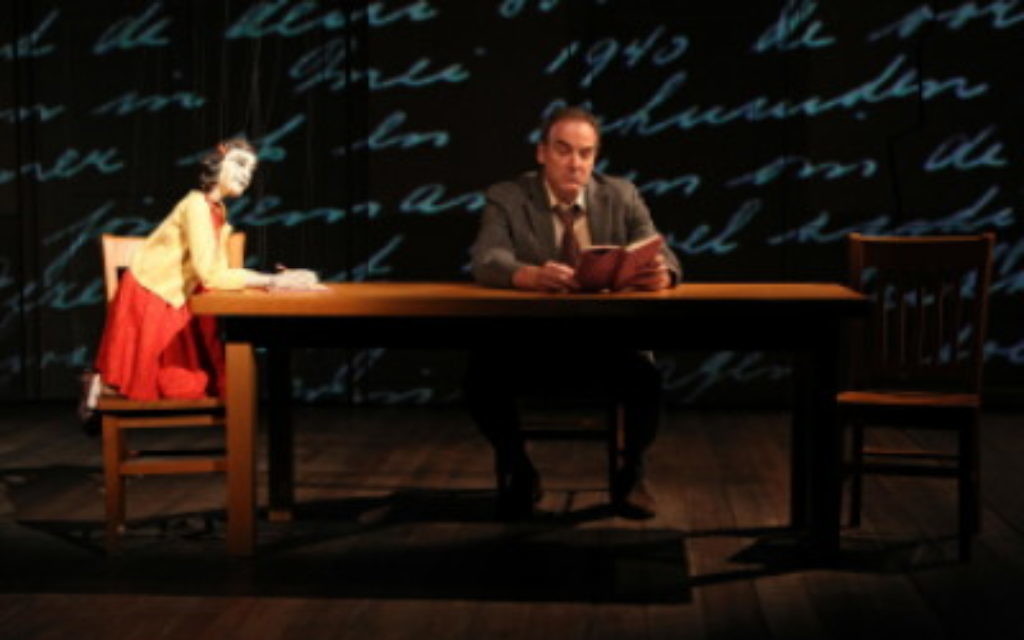 He was one of the leading literary lights of the 20th century, but it was another writer’s work that became the object of his obsession. Meyer Levin was a prolific Jewish writer who struggled fruitlessly for three decades to get the world to pay attention to his play about Anne Frank. Now, three decades after his death, Levin finally gets his due with two different plays about his quest on view simultaneously in New York.

Rinne Groff’s play, “Compulsion,” which opened this week at the Public Theater under the direction of Oskar Eustis, stars Mandy Patinkin as Sid Silver, a character based on Levin. By contrast, Jennifer Strome’s “The Idealist,” directed by Lee Sankowich, will be read Feb. 23 for one night only at the Times Center with Tony Roberts and Alison Pill featured in the cast.

Levin was born in Chicago, where he became successful first as a wartime correspondent and documentary filmmaker reporting on the plight of the Holocaust refugees. He went on to pen 16 novels, including “Compulsion,” a retelling of the Leopold and Loeb murder case that is considered the first “documentary” or “nonfiction” novel, and which inspired Truman Capote and Norman Mailer to write their own celebrated works in this genre.

After first reading Anne Frank’s diary published in a small French edition, Levin resolved to introduce it to the world. He reviewed the book for The New York Times and then won authorization by Anne’s father, Otto Frank, to adapt the diary for the stage.

But Otto Frank, who appears to have been heavily influenced by playwright Lillian Hellman, soured on Levin and his emphasis on the Jewish elements of the story. Otto Frank offered the stage rights first to Carson McCullers and then, upon her pulling out of the project, to Frances Goodrich and Albert Hackett — a husband-and-wife team best known for their Hollywood screenplays of “The Thin Man” and “It’s a Wonderful Life.” Refusing to accept that he had been supplanted, and especially furious that non-Jews would be writing the stage version, Levin waged a fanatical battle to regain the right to dramatize the diary.

The version that made it to Broadway, which won the 1956 Tony Award for Best Play, was famously excoriated by Cynthia Ozick when it was revived in 1997 with Natalie Portman making her Broadway debut as Anne. Ozick claimed that the Goodrich and Hackett drama “infantilized, Americanized, falsified, [and] kitschified” the diary to the point that “it would have been better for the diary to have been burned.”

Interest in Levin and the competing dramatizations of the diary has burgeoned over the last two decades. In the mid-1990s, Lawrence Graver, a longtime professor of English at Williams College, published “An Obsession with Anne Frank” (University of California Press, 1995), which emphasized Levin’s saga. Two years later, Ralph Melnick, then a high school religion teacher, published “The Stolen Legacy of Anne Frank: Meyer Levin, Lillian Hellman and the Staging of the Diary” (Yale University Press, 1997) that situated Levin’s struggle in the McCarthy era. In 2009, Francine Prose published “Anne Frank: The Book, The Life, The Afterlife,” that presented the battle over the diary as obscuring not just Anne’s Jewishness but also her considerable skill as a writer. And just this year, Sid Jacobson and Ernie Colon published a new graphic biography of Anne Frank.

“Compulsion” has been staged at both the Berkeley Rep and Yale Rep, both times starring Patinkin. When it ran last year in Connecticut, Sylviane Gold of The Times called it a “knotty, absorbing play” and lauded Patinkin for bestowing “heart and dimension” on his character. Gold was especially struck by the production’s use of puppets to play Anne and other characters.

Groff’s previous works include “Jimmy Carter Was a Democrat,” about the air traffic control strike of 1981, and “The Ruby Sunrise,” about the invention of television. Her interest in Levin was sparked by Frank Rich’s review of Graver’s book in the Times.

“Who has the rights to someone else’s creation?” Groff asked in an interview with The Jewish Week. While Groff said that her play attempts to be evenhanded in its treatment of Levin, it is difficult not to have sympathy for a brilliant man who allowed his life to be destroyed by his obsession.

Calling Levin a “wounded lion with a deeply vulnerable side,” Groff added ruefully that he was a “voice in the wilderness” and that “society wasn’t ready for what he had to say. Everything he did moved him further away from what he was trying to accomplish.”

Strome, who produced Meyer’s radio play last year, has been working on her own version for more than a decade, ever since she befriended Levin’s great-niece, Robin Pressman, who introduced her to Levin’s widow, Tereska Torres, and their three sons. Strome said that her play differs from Groff’s in that it focuses more on the complexity of Levin’s character than on the legacy of Anne Frank.

Levin over-identified with Anne, Strome suggested. When he lost the rights to dramatize the diary, she said, “it felt that they were taking away [Anne’s] voice for the stage, the same as they were doing to him. He was the only one who was courageous enough to let her speak in her own voice.”

Because of challenges to the diary’s authenticity among Holocaust deniers, some of whom assert that Levin actually forged it, Strome is determined to bring out all the evidence of Levin’s role in adapting the diary. While she finds Groff’s version, which she has seen in both regional productions, “haunting and beautiful,” she claims that her version presents a more straightforward account of Levin’s role that “closes the gaps as to how the diary got adapted” and that avoids what she calls “suppression, unraveling or distortion” of the story.

Asked why there is such intense and abiding interest in Levin’s odyssey, Melnick said, “Anne Frank will always get attention. I’ve never been grabbed by a character as much as I have been by her. She hasn’t been given her due. There’s much more to say about her.”

Melnick noted that Frank is used as a symbol for the Holocaust, for Jewish identity, for resistance to oppression and for the experience of puberty. “She can be anything that you want her to be,” he concluded. n

“Compulsion” opens Thursday, Feb. 17 and runs through March 13 at the Public Theater, 425 Lafayette St. Performances are Tuesday-Saturday evenings at 8 p.m, with Saturday and Sunday matinees at 2 p.m. For tickets, $75, call the box office at (212) 967-7555 or visit www.publictheater.org.