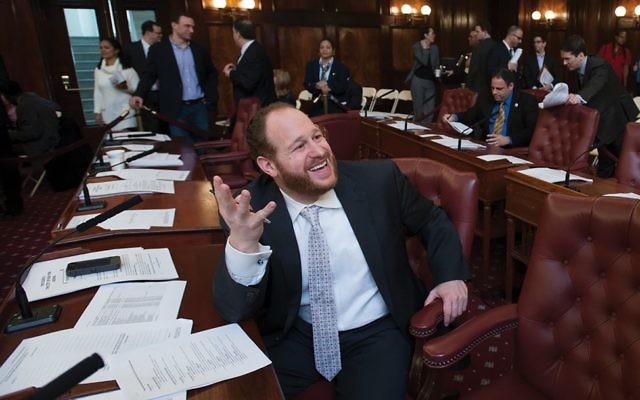 City Councilman David Greenfield taking over an agency trying to get back on its feet. WILLIAM ALATRISTE/ NYC COUNCIL

Nearly four years after a corruption scandal rocked the politically well-connected Metropolitan Council on Jewish Poverty, the social-service agency has tapped a high-visibility Jewish city councilman to try to revive its flagging fortunes.

David Greenfield, who represents Borough Park and Midwood and heads the council’s influential Land Use Committee, will take over the agency in January, just as it launches an uphill rebranding effort meant to slough off an image tied closely to William Rapfogel, the former CEO who netted millions in the insurance kickback scandal.

In his first full interview with the media following the announcement, Greenfield told The Jewish Week that the chance to head “the most important, most vital Jewish charity in New York City,” was “extraordinarily appealing.”

The agency has foundered in the years since the 2013 arrest of Rapfogel (whom, the Daily News reported this week, was quietly released from prison in May, having served the minimum of his three and 1/2- to 10-year sentence). Although the agency’s annual operating budget plummeted by 20 percent between 2014 and 2015 — from $38.4 million to $30.7 million — the Met Council, and Greenfield himself, have confidence in the councilman’s rainmaking ability.

“I think it’s a coup for the Met Council to have gotten him,” said Met Council board president Abraham Biderman, praising the two-term councilman’s extensive experience in nonprofits and politics. “He has excellent relationships in government, excellent relationships within the community,” he said, adding that what tipped the scales in favor of Greenfield is his “experience — knowledge of how government works, which is a major funder of Met Council, and his knowledge of his constituents, who are served by the Met Council.”

As for the revenue decline, Biderman said, “Obviously we had a sharp falloff after the scandal and we’re making major strides. … We’ve stabilized it, we’re rebuilding it … and I think David will help us bring it back to its former glory and beyond.”

Greenfield agrees. “It’s not a secret that I’m one of the most successful elected officials in New York City, and I think this is one of these situations where we have an organization that sells itself,” he said. “I wouldn’t be stepping off from the height of my political influence to join a nonprofit if I didn’t absolutely believe that this is going to be what happens.”

Met Council adjusted to its reduced budget by narrowing its focus, eliminating its home-care services in order to shore up funding for its core mission of fighting poverty and hunger, said Reuben Romirowsky, the agency’s chief development officer, who joined the agency earlier this year.

Romirowsky and Greenfield both spoke of concrete plans to cultivate new revenue sources.

“It’s a new chapter,” Greenfield said Monday in the wide-ranging telephone interview with The Jewish Week. He said that with the threat of federal cuts to social-service funding, people understand that community organizations are going to have to fill the gap. With new leadership, both on the board and the staff, he believes people have renewed confidence in the agency and are ready to help support it. “They’re excited,” he said.

As part of the new era, Met Council is working on rebranding — which might include a name change — to appeal to the next generation of donors, Romirowsky said. It could be a Hebrew name, or something more indicative of what the agency does, such as “Jewish Poverty Response” or something akin to City Harvest’s name. But the agency is still weighing the pros and cons of a name change. While it distances the agency from the Rapfogel scandal and would give people a clearer sense of its mission, it’s not clear that these benefits would outweigh the name recognition the agency currently has.

A sampling of other changes: A shift from food pantries to a Fresh Direct-like table-based ordering system — volunteers would set up profiles for food recipients on a tablet, and then help them order the food they need electronically. The system is a win-win, Romirowsky said: The client doesn’t have to wait hours in line at a food pantry, and the agency gets information on what food people are looking for and when they need it. It also gets a database of its clientele that includes a wealth of demographics — age, location, etc. — that the agency can use for such purposes as planning and grant writing.

The agency is also working closely with the UJA-Federation of New York on a “poverty centennial initiative,” tied to the charity’s 100th anniversary, that involves setting up a large one-stop social-service center in a soon-to-be-finalized location.

Another goal is to expand the Met Council’s volunteer base. “We have a base of volunteers that’s substantial, but that’s mostly within the Orthodox” community, Romirowsky said. “We want to broaden that.” In addition to bringing in more non-Orthodox volunteers, Romirowsky also wants to draw in volunteers with specialized skills, such as marketing, and specialized interests, such as forming ongoing relationships with clients.

“There should be an army,” Romirowsky said.

Along those lines, Romirowsky is planning to put more focus on forming partnerships with other nonprofits.“I just see unlimited synergies,” he said. “To be a communal organization, you have to be more communal.”

Romirowsky recognizes that not all of these ideas will come to fruition. But, he said, “If even a few of these stick and become a template for the future, the future is going to be bright.”

On the political front, Greenfield announced that he was leaving on Sunday, the same day he was offered the Met Council position, he said. Because the deadline for a candidate to get her or his name on the ballot for the primary election was last Friday, July 13, the Democratic committee of vacancies, which Greenfield heads, was designated to choose Greenfield’s replacement. On Monday the committee chose Greenfield’s close associate, Kalman Yeger.

There is much speculation about why Greenfield, who, as the councilman put it, is at “the height” of his political influence, would leave the City Council for the Met Council. Maybe he’s thinking about 2025, when he will be term-limited out. Others speculate it could be for the money: Council members receive a base salary of $148,500 while Rapfogel’s successor at Met Council earned $514,000, according to tax records.

Greenfield, who has an extensive background working for nonprofits, says he thinks that is where he can do the most good.

“I genuinely believe there’s a huge opportunity here. I think I can make a difference, and I’m excited about it,” he said.