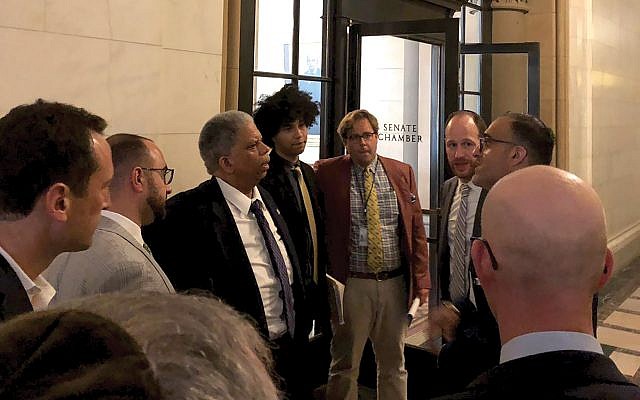 Met Council’s David Greenfield, second from right, with a group of young professional during a lobbying trip to the statehouse in Albany. Courtesy of Met Council

Taking a page from AIPAC, which enlists its members to lobby Congress about pending legislation, the Metropolitan Council on Jewish Poverty bused a half-dozen young professionals to Albany last week to lobby state lawmakers to create a task force to study the unintended consequences of the higher minimum wage law.

It was the first trip of its kind by the agency, which recently launched a Young Leadership Public Policy cabinet to do hands-on lobbying.

The law, which became effective in the city on Jan. 1, increased the minimum wage from $13 to $15 an hour. Shortly after it took effect, “we started getting calls from dozens of clients who were telling us they were losing their benefits and asking us to help,” recalled David Greenfield, executive director and CEO of Met Council, which bills itself as the voice of the poor.

He explained that although lawmakers had increased the minimum wage, they failed to increase the income level for families to be eligible for such benefits as food stamps and child care.

“There are 50 different benefit programs across the city and state,” Greenfield said, adding that there is no easy fix because each has different thresholds and “could potentially cost millions of dollars.”

State Sen. Andrew Gounardes (D-Brooklyn) said that because further study is needed, he authored a bill to create a task force to study the issue.

“While we were trying to help people by raising their income, we don’t want them to lose even more,” he said. “We want to study this and once we get the lay of the land, we can think strategically to mitigate the slope. It’s a no brainer, and we have to give credit to Met Council” for bringing it to lawmakers’ attention.

Of particular help was the half-dozen group of young professionals in their 20s and 30s who took a day off from work last Wednesday and boarded a bus in the city at 6 a.m. for the trip to Albany and day-long meetings with 21 lawmakers.

“They really helped to get a number of co-sponsors on the bill,” Gounardes said.

One of them, Michael Davis, 39, founder of the Plymouth Group, a real estate and private equity firm in Manhattan, noted that “so much of the culture in Albany consists of hired guns and professional lobbyists. We found [our presence] clearly made an impression on the various elected officials. We were non-professional lobbyists who had come to advocate for an issue that was obviously well outside any of our own professional interests — low income people would be gaining a few extra dollars in their paychecks and losing out on tens of thousands of dollars in benefits desperately needed for their families.”

The increase in the minimum wage has also affected the summer youth employment program, according to Assemblyman Simcha Eichenstein (D-Borough Park, Midwood). He said young people 16 to 24 years old who work a full seven weeks would earn about $2,150. His bill would exempt that income from the family’s annual household income so that it doesn’t jeopardize eligibility for public assistance.

“We don’t want a situation where parents discourage their children from participating in the program because it helps them get a head start on entering the workforce,” he said.

The bill was adopted overwhelmingly by lawmakers and awaiting the governor’s signature.