When Zoya Cherkassky was growing up in Kiev in the 1980s, she secretly listened to Voice of America broadcasts, too young to fully understand. But she noticed closely those who would listen for hours. Now a noted artist living in Israel, Cherkassky looks back on her childhood in a series of paintings and drawings.

“Voice of America” is one of the works featured in Cherkassky’s first solo exhibition in New York City, “Zoya Cherkassky: Soviet Childhood,” at Fort Gansevoort Gallery, just south of the Whitney Museum in the Meatpacking District. In that large painting, a long-haired, bearded man with glasses, a dissident, is seated at a table listening to the radio, smoking a cigarette. There’s a chicken hanging next to the window, as was the practice for keeping meat cool, a vintage refrigerator that appears to be from the 1940s and a teapot on the patterned table.

In 1991, when she was 15, the Soviet Union collapsed, the same year that she and her family moved to Israel.

“I want to show it as I remember it,” she tells The Jewish Week in an interview at the gallery, “and it will never come back.”

Cherkassky paints in a bold, assured, figurative style, with studied detail and humor. Each canvas unfolds a story: These are cityscapes and kitchenscapes peopled by Cherkassky’s family, former neighbors and old friends, recorded by memory, or in sketches during recent summer trips back to Ukraine. 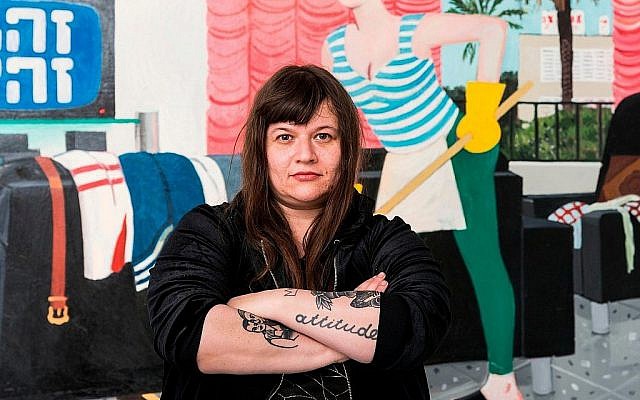 Born in 1976, she has been painting since she was a young child; at age four she started attending art classes, sitting on a pile of books so that she could reach the drawing table. At 10, she began studying at the Shevchenko State Art School. She remembers that when she applied to attend the specialized art school, her mother scratched off the word “Jew” from her identity papers and wrote “Ukrainian” in order to gain entry.

Cherkassky describes the time that she left Kiev as one of “collective psychosis, uncertainty about what was going to happen, and there was Chernobyl. Anybody who had a chance to leave at least tried,” she says, adding that her parents — her mother is an engineer, her father an architect — feared difficult times and that the Jews would be blamed.

“We had an idealized picture of the so-called West. We thought it was like the American dream,” she says. “Israel was part of the West.”

When she arrived in Israel with her parents and grandmother, she immediately enrolled in the Thelma Yellin High School of the Arts and then Beit Berl College’s Faculty of Art. In her academic art training in Kiev, she was very much influenced by Soviet art, and was drawn to the tradition of telling stories through her work, which was very different from the more conceptual approach taught in Israel. In Israel, what she was doing was seen as old-fashioned.

She had the good fortune of having Tel Aviv gallerist Zaki Rosenfeld represent her after seeing her student show as she was finishing Beit Berl. Her final piece at the college, a collaboration with artist Ruth Nemet, was acquired by the Israel Museum.

Cherkassky moved to Berlin for a while and when she returned to Tel Aviv in 2009, she knew that she wanted to “paint like a Russian again” — and she sought company. Soon she found four other women artists in Israel who also studied at art academies in the former Soviet Union. Explaining how quickly the collective came together, she cites the Russian proverb, “the animal comes to the hunter.” Cherkassky, along with Natalia Zourabova, Anna Lukashevsky, Asia Lukin and Olga Kundina are known as the New Barbizon group, named for the 19th-century French realist painters. The women shared a desire to paint in nature, as opposed to a more contemporary self-reflecting style. 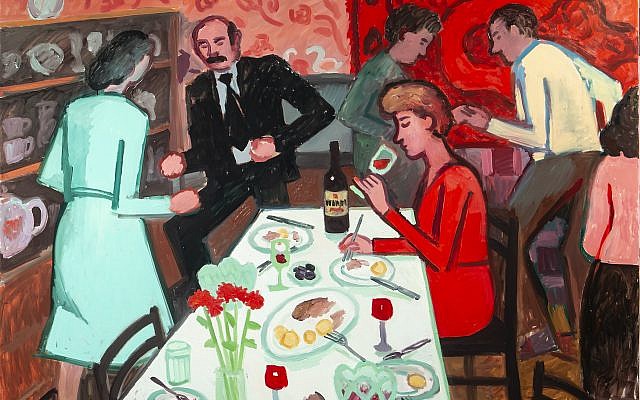 “We succeeded to make the uncool cool.”

For them, nature was often the streets of Tel Aviv, and they looked for tough, intense places. When they would set up adjacent to the Tel Aviv bus station, onlookers would ask questions, sometimes walking between the artist and canvas to take selfies.

In “Pravda,” a show of her work last year at The Israel Museum, Cherkassky presented a series of provocative and striking paintings depicting the experience of new immigrants from the former Soviet Union in Israel. In her pictorial language, she showed the difficulties and cultural clashes in bright colors: a bakery is selling loaves of bread in “Passover in Bat Yam” and in “School Mobbing” a boy clutching a violin case is being bullied by school mates, his Mozart music scattered on the ground. In “Itzik,” a blonde waitress is accosted by the dark Israeli restaurant owner, who is wearing a large Jewish star, while a picture of the Sephardi chief rabbi hangs on the wall.

The paintings in “Soviet Childhood” go deeper into memory, inspired by the birth of her own young daughter, now 4. Cherkassky remembers her Kiev childhood as a happy time, between perestroika and the last days of the Soviet Union; she looks back with nostalgia as well as irony. In this work, she is more a social realist than the social critic of her other projects.

She writes in the accompanying catalog (with text in English, Hebrew and Russian), “I wanted to express the most characteristic moments of the time when Soviet esthetics still dominated the public sphere and yet the ‘pernicious influence of the West’ seeped profusely through the Iron Curtain.” 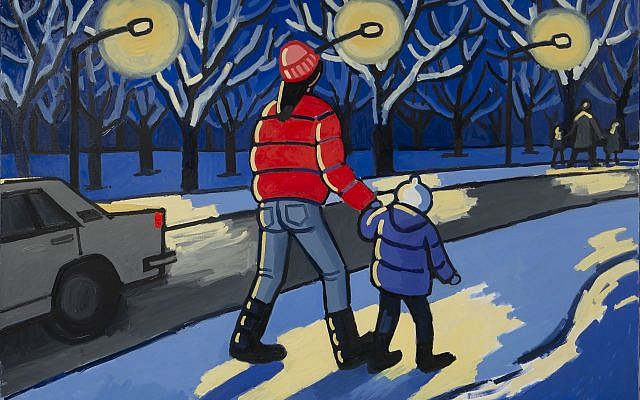 Zoya Cherkassky, “On the Way to School.” Courtesy of the artist and Fort Gansevoort, New York

Capturing this atmosphere, the paintings, completed in 2018 and 2019, show a mix of harshness, gloom and cheerfulness. A woman drinks a glass of wine at a table, while others gather in what Cherkassky says is a typical apartment, with its patterned wallpaper and tablecloth. She explains that her uncle, who was a butcher and returned to Kiev after moving to Israel, would host parties in his small apartment and everyone would find space to dance.

In “On the Way to School,” a parent and child walk hand-in-gloved-hand in what seems like the dark of night. Other paintings show people in sports gear that was very popular at the time or in shirts with English writing, like the woman wearing a T-shirt that says “crazy” as she is baking vareniki with a child. A muscular young man practices karate moves at home — Cherkassky explains that martial arts films became very popular — while his grandmother cooks for him.

Her story is one that’s not often heard. She describes her identity as “multiple. I enjoy it as it is. I don’t call it Ukrainian but Soviet. It follows me like the accent I have.” She adds, “I have lived the majority of my life in Israel, so of course Israeli too.”

“Of course I am Jewish. I am three-quarters Jewish,” the artist says, but notes that “it’s the wrong quarters.” Three of her grandparents are Jewish, and her mother’s mother is not, nor is her mother Jewish. It was only when Cherkassky got to Israel that she discovered that she wasn’t considered Jewish, according to halacha. Now she sees herself as Jewish more when she is outside of Israel than inside.

Her husband is an immigrant from Nigeria, who arrived through Egypt. “I met him when I invited him to model; I didn’t plan to marry him at that time. It just happened,” she says. She appreciates his good eye for art and always asks his opinions. He drives a truck and became very experienced in fine arts transportation when he ferried the New Barbizon painters and their materials around Israel.

She says that she loved New York from the first minute she arrived. While here for the opening of the show, she enjoyed sketching from the 21st-floor window of her downtown hotel.

Back in Israel, Cherkassky works in her studio every day. “Painting is the only thing I do. I am happy and lucky that I am capable of doing only this.”