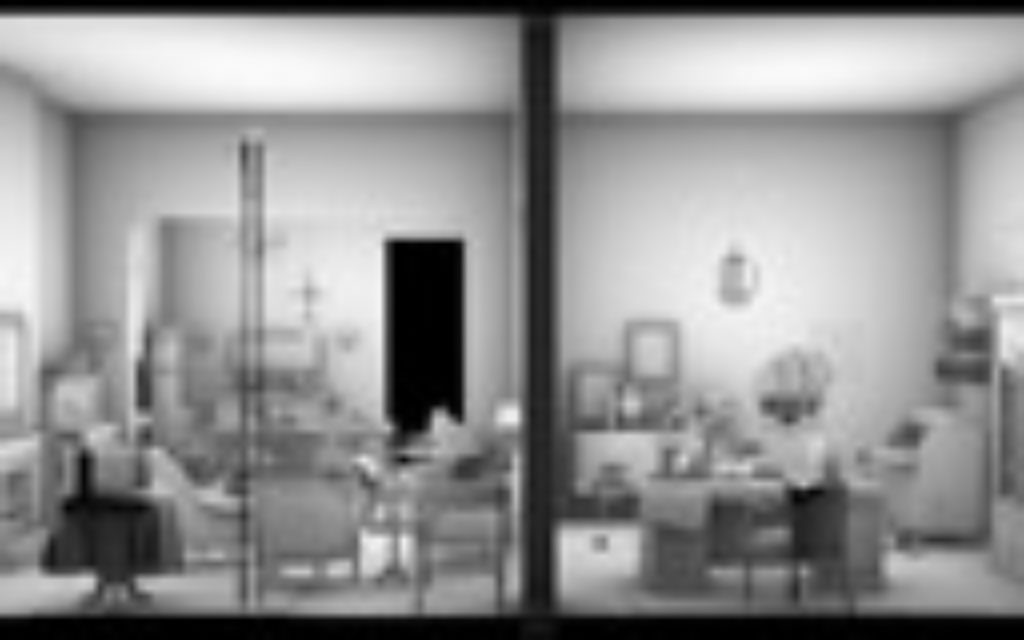 Maya Zack wanted to get every detail right.

She pestered a German Jewish refugee, Manfred Nomburg, about every last detail of the Berlin home where he grew up: the wallpaper, the dining room china, the living room chairs. He had not seen his home in 70 years, when he escaped to Israel.

But when Zack, 35, a prize-winning Israeli artist, turned all those details into a life-sized, computer-generated 3D work of art — titled “Living Room,” which goes on view at The Jewish Museum on Sunday — Nomburg did not recognize a thing.

“He said it’s very interesting and it’s very impressive, but it doesn’t remind him at all of where he grew up,” Zack said in an interview from Tel Aviv. “But that, of course, was the point.”

Zack is interested in the fallibility of memory: of how even the most vivid images we have in our heads are distorted, misremembered and rendered nearly impossible to replicate.

Zack’s first major work, a 19-minute video called “Mother Economy,” which screened at The Jewish Museum in 2008, featured a German Jewish mother living through the Holocaust. Still in her home, the woman assiduously writes down all the items her evacuated family left behind: ballet slippers, a tennis racquet, burnt cigarette stubs.

But in the absence of the people those items belonged to, the film left you feeling nothing but pity for the woman, keenly aware that her meticulous notes did nothing to bring back her family.

Zack’s new work, “Living Room,” explores a similar theme, but in a vastly different way. To create the work, Zack used a 3D-animation program to make four life-size prints featuring several different rooms. Each print is pasted on a single wall of a four-walled structure built inside a gallery at the museum. Viewers put on 3D-glasses and walk through the structure, listening to an actor read Nomburg’s description of his old home.

“It was inspiring to hear him,” Zack said of Nomburg’s recollections. “I tried as much as I could to ask about details, textures, dimensions.” She added, however, that many things were either impossible for him to remember, or too picayune for her even to ask. Those unspoken details mark the distance between reality and representation: the home in his head, and the art we see now.

“There were many things that I added,” Zack said, “like the hole in the wall — that was my invention.” Zack was referring to a gaping hole she created behind a sink in the kitchen. It was not a detail Nomburg forgot, but one the artist deliberately fabricated. The hole represents the blind spots of in our memories.

As the art scholar Aya Lurie wrote in an essay for an exhibit of Zack’s work in Israel last year: “The works introduce a distinctive critical tone rejecting the complacent and the tendency to repress and ignore the threatening voices lurking on one’s doorstep.”

Indeed, Zack said the repression of memory is a theme central to “Living Room.” The work, like “Mother Economy,” was inspired by a visit she made to Slovakia in 2006. Her grandmother grew up there, but left for Palestine in the early-1930s, THE EARLY 1930S shortly after Hitler took power. Almost all her relatives were killed in the Holocaust: five siblings, both parents, many others.

Thinking about what it might have felt like to be her grandmother as the Nazis gained power, Zack began interviewing other Jewish refugees in Israel. But she was particularly fascinated with German Jewish refugees, not Eastern Europeans like her grandmother. What piqued her interest was the way they tended to remember their past.

Zack said that while Eastern European Holocaust refugees rarely expressed nostalgia for the Old World, German Jews almost always did. “They responded by glorifying German culture … and almost ignoring what happened during the war,” Zack said.

She added that German refugees often spoke in both wistful and condescending tones about how assimilated they were. But they seemed to belie an uglier truth. “Living Room” tries to capture the tension between both perceptions: the sanguine and the sepulchral.

While Zack dutifully renders the stylish Bauhaus furniture and elegant chandeliers of Nomburg’s memory, she also injects subtle cues hinting at looming disaster. A copy of the Jewish community newspaper of Berlin at the time, Judische Rundschau, appears hastily thrown on the floor. On the dinner table, a porcelain teacup lies on its side, dripping with fluid.

“On the one hand, there is the context of war and the reality that people tried to maintain of normal living,” Zack said. “On the other hand, [there are other] people that were trying to upset that normality. … I was interested in that.”

Aviva Weintraub, an associate curator at The Jewish Museum who organized the new exhibit, said she first saw “Living Room” in Israel last year. Weintraub was on a panel to select the finalists for the prestigious Adi Prize for Jewish Expression in Art and Design, co-administered by the Israel Museum and Jerusalem Artists’ House. She selected “Living Room,” helping it get a winning vote.

“It’s a very poignant reminder of the daily life that was broken,” Weintraub said of “Living Room.” The 3D aspect was not only novel but incredibly poignant, she added. It lent the work a sense of drama as you walked through it, as well as a visual immediacy. “You really feel the rooms come to life when you put the glasses on,” she said. “You have a strong sense of life interrupted.”

The decision to make the work in 3D, Zack said, came to her by happenstance. She originally wanted to make life-size drawings of Nomburg’s rooms, then asked a friend who knew how to use 3D graphic-modeling for help. She wanted to visualize the rooms from various angles to help draw each image.
But she liked the 3D images so much that she decided to create fully detailed rooms. Printing them in 3D and having viewers put on glasses to view the work would make it more interesting, she thought.

Though Zack is an experienced filmmaker, she said that her decision to use 3D had little to do with the current vogue for 3D films in Hollywood. “Actually,” Zack said, “I made it before ‘Avatar’ came out.”

But the pop-culture parallels did not bother her. “I was debating whether to use this gimmick” — 3D — “but I decided it lends a temptation to viewers” to beg the question of Hollywood-style artifice, she said. And yet, she said that using 3D had a real aesthetic pay-off: “For a very brief moment it allows you to reach into this person’s life.”

The person in question is Manfred Nomburg, now 88. After interviewing several German Jewish refugees in Israel, Zack was particularly moved by his story. He lived in a well-off section of Berlin and attended a good German school, the Kaiser Friedrich Real Gymnasium.

But in 1936, Jews were barred from German schools and his parents sent him to the Jewish counterpart, called Moabit. Things deteriorated quickly, however. His parents arranged for his younger brother to leave for England on a kindertransport, with 10,000 other German Jews. When Manfred was 15, he secured his own visa to immigrate to Palestine. He arrived in Haifa on Nov. 7, 1938. Two days later was Kristallnacht.

“What I remember most clearly,” of the day he left, says Nomburg on the translated interview that plays during the exhibit, is “all the things I had to take with me. It was possible to take whatever one wished, even furniture.”

But he explains that a German migration officer meticulously recorded each item Jews took, and a 100 percent tax was placed on each item. “They called it Reichsfluschsteuer: since the Jew is running away, one must charge him more money, so he pays double the price.”

He made it to Haifa with a group of several other German Jewish students. But his parents stayed behind. They had secured a visa to travel to Chile, but when a Nazi officer discovered it was forged, they were turned back. Nomburg kept up a correspondence with his parents until Oct. 18, 1941.

That was the date of the last letter he received from them, or rather, from the Red Cross. It read: “Transported on 18.10.41, Lodz. Place of Death.”

But on the voiceover Nomburg says that that is not exactly how it was worded, only how he remembers it. It didn’t read “Place of Death,” but the German word: “verschollen.”

“Well, that’s how they phrased it,” he says, “verschollen.” It means “missing.” n