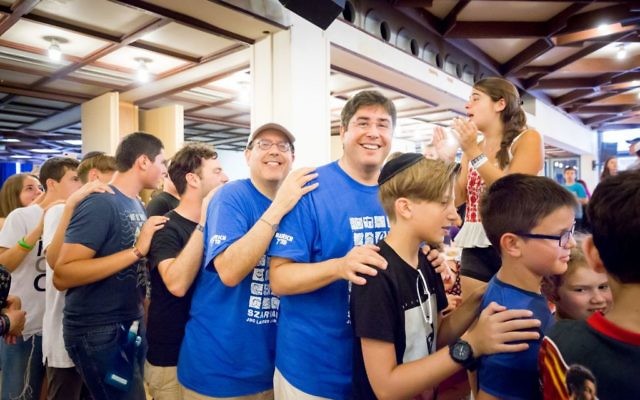 Brette Ehrenpreis looks a lot like your typical millennial — she works long hours and spends most of her free time with friends and family, often enjoying New York City’s restaurant and theater scene. She follows her favorite charities on social media and donates as often as she can to causes she cares about. But for Ehrenpreis, being an outsider looking in wasn’t enough — she wanted to be more directly involved in philanthropic work that helps change lives.

Ehrenpreis attended her first UJA-Federation of New York event a few years ago and jumped on the fast track to learning more about our work and getting further engaged. Now in her early 30s, she co-chairs a committee, attends dozens of events and programs every year, and has traveled on overseas missions to experience UJA’s impact abroad. Through that work, she’s also directly engaged with the people and processes through which UJA makes tens of millions of dollars in grants every year.

UJA’s work and impact are central to Ehrenpreis’ involvement with UJA, but over time she has come to value and appreciate the sense of community she has found. Last week for instance, following the devastating shooting at Pittsburgh’s Tree of Life synagogue, Ehrenpreis joined 40 millennials at UJA for a special breakfast program hosted by UJA’s Emerging Leaders & Philanthropists (ELP) division in conjunction with the nationwide Solidarity Shabbat effort. Jeffrey M. Solomon, CEO of Cowen who grew up in Pittsburgh’s Squirrel Hill neighborhood, gave a personal and powerful firsthand account about how the shooting reinforces the importance of doing good in the world. Like others who adjusted their early morning routine to attend, Brette sought an opportunity to come together with her peers in the wake of tragedy.

When people talk about millennials, the generation of young adults currently in their 20s and 30s, certain stereotypes come up repeatedly. Millennials are optimistic, confident, impatient, narcissistic. Positive or negative, true or untrue, these portrayals do little to help us understand this generation as a whole — nor how they want to be engaged in Jewish life and Jewish philanthropy.

Hoping to understand this generation better, in 2016 UJA conducted a study on millennials, and among the takeaways a few trends emerged: the overwhelming majority of millennials polled believed that being Jewish is an important part of their identity. However, their current priorities center around work and relationships, and they feel removed from any effort, philanthropic or otherwise, that requires them to “step back” from these pursuits.

With this in mind, UJA doubled down on its programming to reflect the areas in which millennials feel most invested — their professional, personal and philanthropic leanings. Through a range of social, topical, and hands-on programming, leaders like Ehrenpreis take advantage of opportunities to learn from experts in professional fields, connect with peers over Shabbat dinner or experience the impact their dollars have during volunteer events at partner organizations.

Recognizing that millennials are discerning customers who seek to understand the impact of their giving, three years ago UJA developed a powerful program called the ELP Giving Society — a giving circle that exposes UJA young leaders to the full grant-making process. Each year, more than a dozen young leaders come together to learn about UJA issue areas such as anti-poverty work or Jewish education. After numerous deep-dive learning sessions, the giving circle selects a handful of specific programs to hear more about and engages in a “Shark Tank”-like session where potential grantees pitch their projects. Ultimately, the group provides a grant that they themselves make possible: each participant contributes to the pooled fund on top of their annual gift to UJA, and UJA kicks in a matching amount. The first two grants funded work combatting BDS on campus and a therapeutic program for Holocaust survivors suffering from dementia.

In addition to marrying philanthropy with millennial’s interests, UJA’s research study suggests that millennials are particularly interested in gaining leadership skills and being exposed to new leadership opportunities.

Over two decades ago, UJA established The Observership Program — a year-long opportunity for young leaders to serve as non-voting members on internal planning committees or partner agency boards. The program has never been more successful than today, and we currently have 60 participants. The investment on the part of observers is very real — they commit to attend about 20 programs and board meetings over the year.

So what does this all mean? As Ehrenpreis told us, “Engaging with UJA is the best way to be philanthropically involved — through hands-on experiences, I felt some ownership of the impact of the work in improving people’s lives. My own commitment naturally deepened.” Bottom line: In order to engage millennials, organizations need to step into the space where millennials are pursuing their life goals and offer them leadership opportunities that are symbiotic with their personal pursuits and passions. With leaders like Ehrenpreis stepping up across our organization, we are confident that our community is in wonderful hands with this next generation of Jewish philanthropists.