To say that Ravid Kahalani is a charismatic performer is to say that water is wet and hawaij, the Yemeni spice blend, is fragrant.

The Israeli-born musician is the lead singer and cofounder of Yemen Blues, a genre-busting musical group that fuses Yemeni and Hebrew melodies with jazz, blues and funk influences.

It’s been described as “a crossroads of Yemenite melodies and contemporary funk,” but even that is limiting for an experimental group that is constantly evolving and beyond definition.

Think Prince or Michael Jackson, but Yemenite via Israel and with a hint of James Brown.

“They were all big influences on me,” Kahalani says.

And like them, Kahalani, 41, is more than just a talented singer and composer but a full-blown performance act. Sure, his voice is the main showpiece, with a rare vocal range that handily switches between high-pitched falsettos and deep baritones without so much as a breath. But it’s more than that.

When he was young he practiced ballet and later studied dance when he was in his early 20s and living in Tel Aviv, training that is evident on the stage. During performances his towering, lean figure gallops gracefully across the stage, contorting to the rhythms coursing through him like electric currents and engaging the full cast of musicians that support him. “I’m very free about the way I move,” he says, adding that it’s a key part of the performance. “Dance and music always go so well together. It becomes one when it’s happening together. It’s part of representing music in a specific way.” 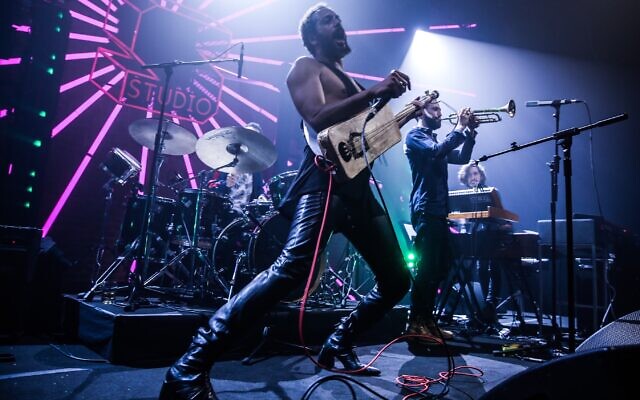 With its rotating cast of talented musicians, Yemen Blues are known for their energetic live performances, from small intimate venues to large festivals. Courtesy of Kalipro/Yemen Blues

Elaborate hairstyles and outfits, including flowing metallic robes, colorful print suits, heeled shoes and sultan-style hats, top it all off. For a while he sported long thin braids knotted in a crown at the top of his head, the sides shaved.

It all makes for a dynamic, encompassing artistic experience, one New York audiences can see for their own eyes next week. Yemen Blues will perform at Joe’s Pub on Dec. 24, in what Kahalani promises will be a “super high energy” show.

Kahalani created Yemen Blues around 10 years ago with his friend, Omer Avital, a New York-based jazz musician and producer. Since then Yemen Blues has recorded three albums (two in studio and one live from a Tel Aviv music club) and performed over 700 shows at venues and festivals here, across the United States and in places around the world including Israel, India and Japan. A changing rotation of Israeli and international musicians join Kahalani to form Yemen Blues’ eclectic sound. Some, like Shanir Blumenkranz and Rony Iwryn, are steady accompaniments.

The group has the rare ability to move seamlessly between audiences, from the more staid, binocular-toting crowd at Symphony Space, like the one at October’s “Hallel” tour, to the young hipster crowds on the scuffed, beer-stained floors of music clubs like Brooklyn Bowl and Le Poisson Rouge. At each show, the audience was drawn into its magnetic, mesmerizing sound and up onto their feet. 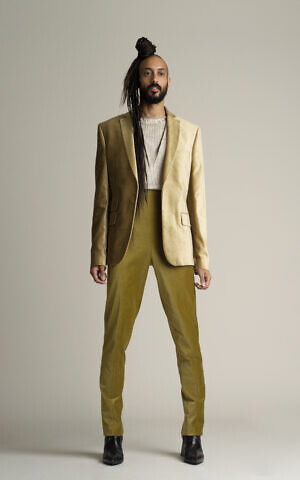 Much like with his deeply creative and exploratory approach to music, Ravid Kahalani constantly experiments with different outfits and hairstyles. It’s all part of the performance, he says. Courtesy Guy Nahum Levy/Yemen Blues

This fluidity extends, too, to the music, which is mostly Hebrew and Yemeni Arabic, an ode to Kahalani’s family’s background, but also includes songs in French and English. Though he only speaks Hebrew and English fluently, Kahalani composes the sounds and lyrics and then recruits friends to translate them into the language that feels best suited to the composition. Most important for Kahalani is “that the atmosphere of the song really fits with the language.”

Many of the songs on the latest album “Insaniya” (Records DK, produced by Bill Laswell) were translated by Ahmed Alshaiba, a Yemeni Muslim oud player who opened for the band at their latest show here and has collaborated with Kahalani on a number of tours. (Insaniya means humanity in Arabic.)

“I just do whatever feels right,” Kahalani says of his organic approach, “We never work on the music coming from a perspective of creating something very specific. We always come from a place of whatever sounds good it’s there, and whatever doesn’t it’s not. For me, it really needs to be something that will flow amazingly. Sometimes you do things and it doesn’t come out super perfectly, but that’s why you play with it and practice and improvise a lot. It’s a fun process to dive into.”

Like “Ton Sourire” and “Trape La Verite,” which Kahalani sings in French Creole, translated by a friend from Guadeloupe.

Home Is Where The Guembri Is

Kahalani moved to New York City a few years ago but now splits his time between Jerusalem and the Big Apple. I caught up with him over a series of video-calls while he was in Jerusalem. He appeared more somber and withdrawn than he does on stage — an artist away from his art — but nevertheless warm and forthcoming as he told me about his winding road to a career in music.

He grew up in a traditional, religious family in an Jewish settlement in the hills near Nablus. He grew up listening mostly to Yemenite or religious music and from as young as he can remember he was always singing, often gibberish. In an attempt to integrate their kids fully into Israeli culture, his parents refrained from speaking to their children in their native Arabic. 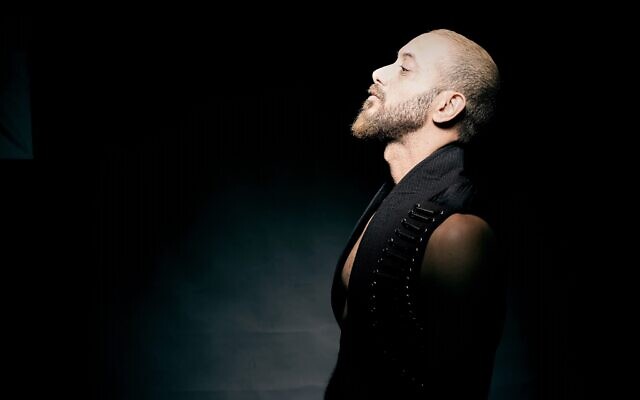 Much of Ravid Kahalani’s music pays homage to his Yemenite heritage. But it doesn’t stop at that. His frequent collaborations with artists across various genres ensures his sound is always evolving. Courtesy of Zohar Ron/Yemen Blues

Later as a teen he started listening to Bob Marley and Pink Floyd, then became a big fan of jazz, blues and funk. At 13 he picked up a guitar for the first time, and with the help of a few friends who showed him some basic chords, he taught himself how to play guitar, later picking up percussion instruments, the guembri (a Moroccan guitar-like instrument) and a bit of trumpet.

He left home and religion as a teen and moved to Holon and later Tel Aviv. He trained briefly as a dancer, had a stint performing drag and theater and worked as a chef and bartender. (He and a friend crafted a cocktail called Gali Atari after a popular Israeli singer. “It wasn’t very good,” he says, “just a bit of fun.”)

He ended up touring with Idan Raichel for five years as a backup singer. After founding Yemen Blues at the beginning of decade he parted ways as his touring schedule got busier.

His music now pays homage to his family’s rich Yemenite heritage, much of which had been suppressed.

“I felt like I missed a big part of my father’s language and culture so I wanted to reconnect to it.” Singing in Arabic also feels natural to him, even though he doesn’t speak the language. “The way Yemenite Jews pray sounds very much like Arabic because we pronounce the letters like the Arabic pronunciation,” he says, enunciating the guttural sounds for me. “So its kind of because I was all my childhood praying like this, it’s more comfortable for me to sing like this.”

Like a song he produced with popular French rapper, Oxmo Puccino, that blends their two distinctly different sounds. “International is the magic,” a lyric says. Indeed.

Yemen Blues has also collaborated with a number of Muslim artists, like Alshaiba and Mariem Hassan, a singer from Western Sahara.

“Working with other people brings so much of other [people’s] worlds into your music,” he says “It just makes it better.”

Though he has become somewhat of a cross-cultural ambassador, for him its purely about the creative process, any peace-making that happens in the process is an unintentional addition.

“At the end of the day I try not to believe in where I’m from, [but] I try to be more about individuals and where we are as people, and how we can do the best to live here and have fun,” he says.

One of his proudest moments was performing at a recent show at Brooklyn Bowl where he and Alshaiba got equally enthusiastic cheers from an audience that included Muslims, Jews and Christians. “There is something… the power, the energy [that makes] everybody kind of feel a part of it,” he says, getting more and more animated. “At many points in the music, you can find a part of yourself, and thats the beauty of creating music and going against rules and frameworks.”

He says it helps people forget about what’s happening outside of the experience. “I hope people take it into their personal lives and there are cultures that reconnect and more of an awareness of being for each other in this world,” he adds.

Last fall Yemen Blues’ toured the U.S. with a special musical series focused on Hallel, the Hebrew prayers of praise based on verses from Psalms. (Part of the proceeds went to Doctors Without Borders working in Yemen). Gospel singers from Harlem’s First Corinthian Baptist Church joined the group on stage during the performance here. “It’s the same spirit, it’s the same soulful area,” Kahalani says. “I was singing it in the Yemeni Hebrew way and they were singing it in their own way. It didn’t feel different.”

He hopes to have more opportunities to collaborate with Charles Anthony, the church’s main vocalist, as well as others to create a project that fuses gospel and funk, with Arabic harmonies and Jewish content. His plan? “To create the next level performance of it.”

“I want to create those DNAs between the Yemeni Jewish world and the funk world and gospel, and not just create a spiritual connection and musical connection between those, but to evolve and take those cultures together and bring the dots together and those soulful points that really feel the same, that really sound the same, and go really deep into it and create something that sounds like one,” he says.

The result will be a new kind of spiritually ecstatic musical experience, he promises.

“It will be a supremely powerful performance.”

Yemen Blues will play at Joe’s Pub on Dec., 24 at 7:00pm. More information and tickets here.

Miriam Groner is the digital director and an occasional writer at The Jewish Week. Find her on Twitter @Mim_G and Instagram @Mim____G.