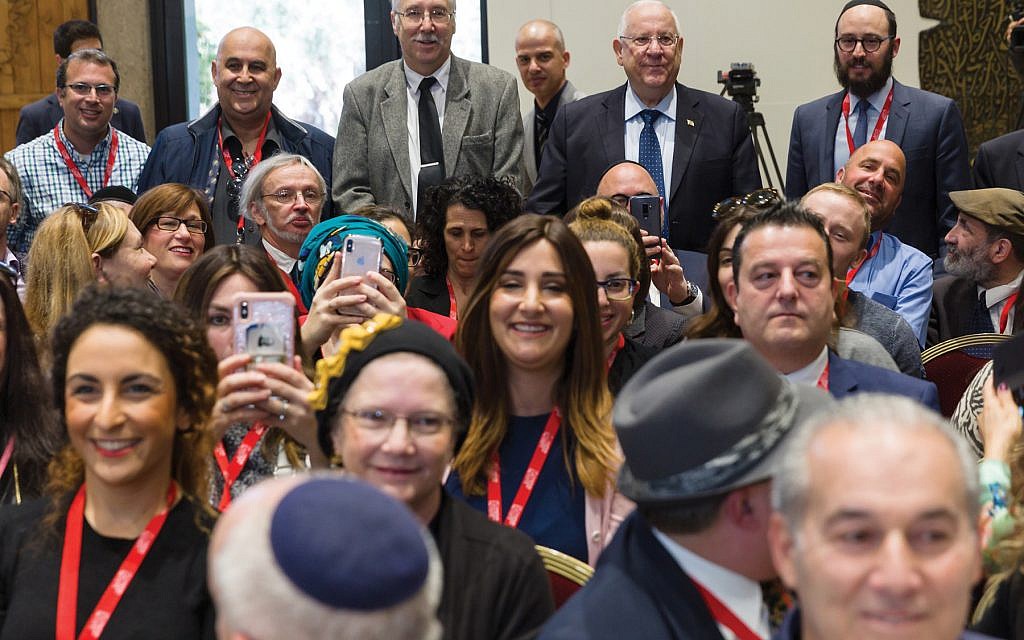 Man of the people: Israeli President Reuven Rivlin (back row, second from right) chose to go to the back of the crowded room to pose with the participants of the Jewish Media Summit at his residence last Wednesday. Courtesy Government Press Office

Jerusalem — It’s rare to find Israeli Prime Minister Benjamin Netanyahu in a good, even jovial mood, when taking questions from the press.

As one of 150 participants from 30 countries at a Government Press Office-sponsored Jewish media conference held here last week, I marveled as the prime minister enjoyed engaging with our group, getting a big laugh when, interrupting the first questioner’s reference to “mainstream media,” he responded: “What’s that?”

Two years ago, at the last such conference, which was more contentious, Netanyahu was ornery from the outset. His manner was challenging and dismissive, interrupting questioners and suggesting alternative topics, at one point ignoring a pointed inquiry and waxing eloquent on Israel’s impressive cows and their dairy output.

So when the prime minister popped in, unscheduled, during our visit to the Knesset last Wednesday, I was surprised by his high spirits — and disappointed that, for the most part, the questions posed to him weren’t sufficiently challenging, given the various corruption charges he faces; the perception that his close relationship with President Trump is alienating many liberal American Jews and threatens Israel’s longstanding bipartisan support in Congress; and his fragile, one-vote majority in the Knesset (which is why he was in the building, to cast votes in a series of bills that day).

One big difference between this year’s conference and the last one was the composition of the participants. In December 2016, there were 50 of us Jewish journalists, but this year not only was the group three times as large, but the organizers’ focus appeared to have altered. Indeed, by the time we arrived in Jerusalem, the title of the four-day conference had changed from “Jewish Media Summit” to “Jewish New Media Summit.” The program guide described us as “a select group of top Jewish public opinion leaders and new media bloggers from around the world.” 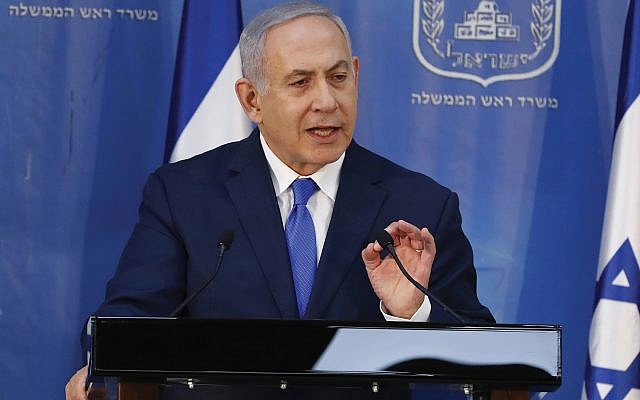 Israeli Prime Minister Benjamin Netanyahu lashed out at the police this week,
calling “Case 4000” a “fixed game” and claiming that the police had cooked up the charges even before the investigation started. Getty Images

It’s clear that social media is ascendant, and it made perfect sense for the Government Press Office to invite young bloggers for the first time. But there is a difference between journalists, whose mandate is to strive for facts and fairness, and bloggers, whose goal is opinionated engagement. (And the difference takes on fresh relevance these days as the prime minister stands accused in several corruption probes of trading favors for fawning press coverage.)

At the opening session last Monday morning, one young participant asserted that “we’re here to help improve the image of Israel.” That was consistent with the message we received from several government leaders we met with during the week, though some of us viewed the conference as an opportunity to be informed rather than persuaded.

There is a difference between journalists, whose mandate is to strive for facts and fairness, and bloggers, whose goal is opinionated engagement.

Most of the bloggers who attended write about cultural issues including travel, arts and food. All worthy interests, but they made for an odd pairing with a minority of us journalists seeking political and ideological insights on issues like the Arab-Israeli conflict and the troubled Israel-diaspora relationship.

Indeed, when Nitzan Chen, the director of the GPO, called on a food blogger from the U.S. for one of the few questions put to Netanyahu, a spontaneous groan arose from some of the participants — in part because earlier in the day, the same Kosher Guru, as he is known, was granted one of only three questions put to President Reuven Rivlin in a formal session at the President’s Residence.

In that encounter, after the Kosher Guru’s lengthy comments on how sharing meals can help bring about peace between Arabs and Jews, Rivlin noted: “You have lectured me and asked me to respond.” He went on to describe how his own family members’ tastes in cuisine are based on their mixed Ashkenazi and Sephardi backgrounds.

I was called on to ask the first question of Rivlin, a longtime right-wing Knesset member now widely admired for his emphasis on unity and moderation as president. He has described Israeli society as divided in a culture war among four tribes — Arabs, ultra-Orthodox Jews, National Religious Jews (we would say “Modern Orthodox”) and secular Jews — each with its own educational system, basic values and visions for Israel’s future. Lately, Rivlin has been referring to diaspora Jews as the fifth tribe, so I asked him to explain his understanding of that role. As a Jerusalem Post report on the meeting noted, the president basically skirted my question by summarizing his views on the four tribes, but he did say that diaspora and Israeli Jews “are connected even though we are citizens of different democracies” with an obligation to support each other.

(The only other question put to Rivlin at our meeting was from a Los Angeles-based comedian who performed the opening night of the conference. He asked the president what he likes best about his job. The quick reply: “I like best meeting people like you.”)

Among the more substantive remarks from Netanyahu during our time with him at the Knesset was his emphasis on “the shrinking diaspora” and “the disappearance of Jewish identity” among younger Jews outside of Israel. He took pride in asserting that very soon, “for the first time in 2,000 years,” Israel will be home to the majority of world Jews. But he said he is deeply worried about assimilation abroad.

The prime minister sought to speak positively of the nationalist leaders of Austria and Hungary he has met with, complimenting them for seeking to deal with anti-Semitism. When asked by a British reporter how he would deal with Jeremy Corbyn, the Labour Party leader seen by many British Jews as anti-Semitic, Netanyahu responded, “How would you deal with him?”

He then pivoted to a favorite theme, the threat that Iran represents to Israel, describing it as “the worst anti-Semitic country” that “denies the Holocaust while preparing the next one.”

In discussing those critics of Israel who claim that being anti-Israel is not the same as being anti-Semitic, Netanyahu compared them to those who would claim, “I’m not against the French, I’m against France.”

The issue of distinguishing between anti-Israel and anti-Semitic behavior was a repeated theme during the conference, which devoted a 90-minute panel discussion to the topic. Efraim Zuroff, chief Nazi hunter and director of the Simon Wiesenthal Center’s Israel office, summed up the dilemma neatly in observing: “Eastern Europe loves Israel and hates Jews.”

Near the conclusion of the lively discussion, which turned into a brief but ugly shouting match over West Bank policies between the other two panelists, Caroline Glick, senior columnist for The Jerusalem Post, and Anshel Pfeffer, correspondent for the left-wing Haaretz, moderator Haviv Gur, an editor of The Times of Israel, observed that “even we on the panel can’t agree on one definition of anti-Semitism.”

Other highlights of the summit:

Amidst the lineup of panels and lectures from experts, meetings with political leaders and tours of the country, the most intriguing element of the summit was being together with Jewish journalists and bloggers from around the world. Unfortunately, there were no formal sessions that allowed the participants to get to know each other and learn of the challenges we face in our respective countries and communities. But there was a good deal of informal conversation at meals, on the bus trips and during our rare moments of free time.

It was humbling to hear from colleagues in countries like Ukraine, France, Hungary, Belgium and Greece about the various forms of anti-Semitism they contend with and their struggles to remain viable sources of information for their readers.

If, indeed, we in the diaspora are, as President Rivlin said, a fifth tribe, it means that caring Jews in the communications field — journalists and bloggers alike — have a responsibility to deepen our own Jewish identities by better understanding Israeli society and helping Israelis learn more about our communities, strengthening the bonds between us.