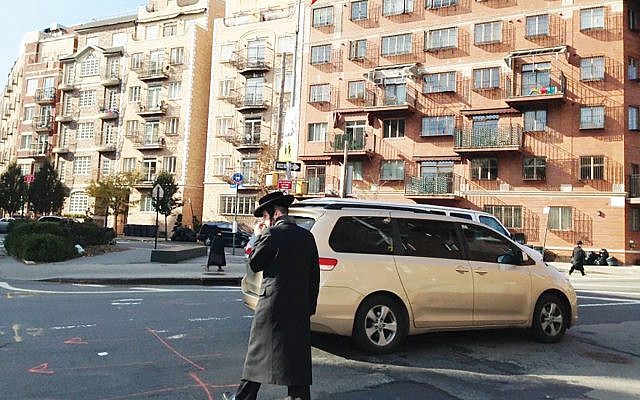 From Williamsburg, Brooklyn, to upstate Rockland County, and from Detroit to Austin, Texas, the measles crisis, and the fight over vaccinations, are rippling across the country.

New York’s Metropolitan Transportation Authority is investigating a complaint by a charedi Orthodox man, who alleges that a bus driver refused to stop for him at a Brooklyn bus stop over the current measles outbreak.

The man said that the bus driver drove past the stop in the largely Orthodox-populated neighborhood of Williamsburg last week but that he caught up with it after it got stuck in traffic. The bus driver eventually let him on, covered her face with her sweater, and refused to accept the man’s transfer, while shouting “Measles! Go in!” the Brooklyn Paper reported.

The incident was reported to the MTA on Thursday by the United Jewish Organizations of Williamsburg, which is working with the city to curb the measles outbreak by educating the community and encouraging vaccination, according to The Forward.

“The measles outbreak should not be used as an excuse for antisemitism,” the group said in a tweet.

A second tweet from the group added that: “Facts are, about 95% of the community is vaccinating. We, the Rabbis and community leaders, are working hard to increase it. Not justification to attack the entire community for the shortcomings of a few.”

There have been 285 reported cases of measles in Brooklyn’s Orthodox Jewish community since October, including 246 children. The Brooklyn outbreak has been tied to an unvaccinated child who contracted the disease during a trip to Israel, The Washington Post reported.

Rabbi David Niederman, president of United Jewish Organization, told the Brooklyn Paper that charedi Jews in Williamsburg are being harassed on the streets with people shouting “Jews, measles” at them.

De Blasio also said that his office has been in touch with the MTA over the incident. ‘Anti-Semitic discrimination has no place in our city,” he said.

Meanwhile, the vaccination fight intensified as anti-vaccination activists are using the yellow Star of David that Nazis forced Jews to wear during World War II to promote their cause.

Activists are using a star that has the words “No Vax” in Hebrew-stylized letters on social media, while others are wearing yellow stars at events, according to a Friday report by the Anti-Defamation League.

Del Bigtree, CEO of the anti-vaccination group ICAN, wore a yellow star last week at a rally in Austin, Texas, and activists in suburban New York’s Rockland County likened a ban on unvaccinated children in public spaces to combat a measles outbreak to Nazi treatment of Jews, The Washington Post reported.

The ADL slammed the comparisons.

“It is simply wrong to compare the plight of Jews during the Holocaust to that of anti-vaxxers,” Jonathan Greenblatt, the group’s national director, told the Post. “Groups advancing a political or social agenda should be able to assert their ideas without trivializing the memory of the 6 million Jews slaughtered in the Holocaust.”

The anti-vaccination movement has risen in popularity in recent years. Recent measles outbreaks have been traced back to Orthodox Jewish communities, where some parents are refusing to vaccinate their kids.

In addition, the number of people who have contracted measles in the Detroit area because of contact with a charedi Orthodox traveler has more than doubled in the past three weeks to 39.

All but one of the cases reported due to contact with the Israeli man known as “Michigan’s patient zero” are in Oakland County, The Washington Post reported Friday. The man was in the area fundraising for a Brooklyn-based charity.

The number on March 26, when the Detroit Jewish News reported the outbreak, was 18.

The Israeli had visited synagogues, businesses and yeshivas before the Purim holiday after arriving from New York, where there is a measles outbreak in some Orthodox Jewish communities.