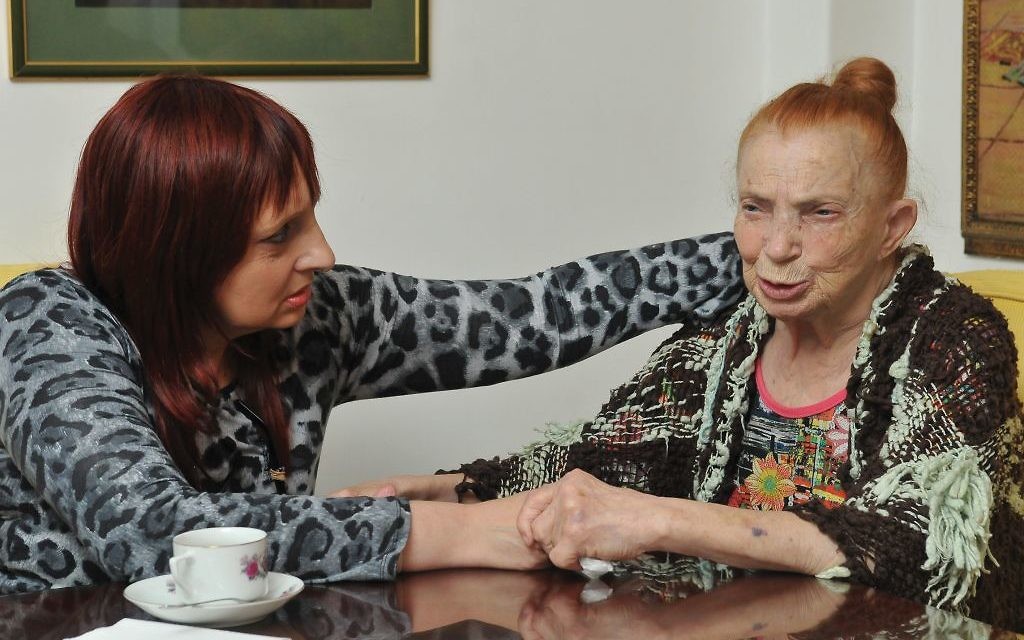 The cleaning lady was the first to go.

Now, it is the potentially life-saving medical alert button.

It costs the 90-year-old Holocaust survivor who lives alone in Rockville, Md., $25 a month for the button. The Jewish social service agency that assists needy survivors stopped paying for the housekeeper last year because of a lack of funds and now says it can no longer afford to pay for the device.

“She was told she would either have to return the machine [which sends emergency assistance when the button is pressed] or pay for it herself,” said Louise Lawrence-Israels, a survivor and coordinator of the 70-member Jewish Holocaust Survivors and Friends of Greater Washington. “They already took away her cleaning lady last year. I know six other people they have done this to, but it could be many more.”

The survivor, it turned out, had too much in the bank.

Officials of the agency, the Jewish Social Service Agency of Greater Washington, attributed the cutback to a near doubling in the last two years of the number of survivors requesting assistance — from 230 to 440.

As a result, they are involved in a kind of moral triage.

“We had to impose some caps on services” based upon means testing in order to “stretch our dollars to serve more people,” said Todd Schenk, the agency’s chief executive officer.

He said that although there are “certain services provided regardless of means — socialization and the coordination of care — others are means-tested: financial assistance, subsidized services and homecare. There has always been means testing, but we are probably looking closer at that to serve those most at need.”

Although the German government has always required means testing for its assistance programs — despite survivor objections — the issue is assuming greater urgency as the Conference on Jewish Material Claims Against Germany prepares to again negotiate with Germany for additional funding.

Greg Schneider, executive vice president of the Claims Conference, noted that over the years his organization has negotiated for a liberalization of a survivor’s income and assets to be eligible for assistance. To be eligible today, a survivor’s income (from work or investment income) cannot be more than $25,000 a year, not including a pension, German restitution or Social Security payments. And the survivor’s assets cannot be greater than $500,000, excluding the value of his or her primary residence.

Means testing does not sit well with survivors, according to Lawrence-Israels.

“Survivors are being penalized for being careful with their money,” she said. “If Germany gives money for survivors, the survivors should get it whether they have $100,000 in the bank or $10. Survivors have saved their money so that should they have to go to a nursing home, they can go to the Hebrew Home of Greater Washington and not a state-run home.”

Leo Rechter, a survivor from Queens who is president of the National Association of Jewish Holocaust Survivors, called it “offensive and fundamentally in conflict with Germany’s moral responsibility for the injuries inflicted by the Nazi German regime. No survivor should have to become indigent again to be eligible.”

A shortage of German funds in the New York area meant that Selfhelp Community Services, the largest provider of comprehensive services to Holocaust survivors here, had to shortchange as many as 180 of its 500 clients who need home care.

These shortages have prompted federal and city governments for the first time last year to allocate money to help needy survivors. The Obama administration announced that $12 million would be allocated over five years, and the New York City Council allocated $1.5 million. Leaders of UJA-Federation of New York held a press conference outside City Hall last week asking the City Council to double last year’s allocation.

Members of the House Foreign Affairs Committee unanimously passed a resolution last month urging Germany to “fulfill its moral responsibility to Holocaust survivors and urgently provide the financial resources necessary to ensure that survivors live in dignity and comfort in their remaining years.”

About 50 members of the House have already signed on to back the bill when it goes to the full House for a vote.

Jack Rubin, a survivor and member of the executive committee of the Florida-based Holocaust Survivors Foundation, said that although he welcomes money raised by private groups and federal and city governments, such money “will never do what actual appropriations from Germany will do.”

“We believe the actual unmet need of survivors’ care … is in the billions of dollars,” he told the House Foreign Affairs Committee in 2014.

Members of Congress wrote to the German Finance Ministry last December imploring it for additional money because of the “rising cost of homecare, the expansion of survivors eligible for homecare, and the increased number of survivors living in poverty following the global recession.”

The ministry agreed, writing: “Recent experience has shown that the care financed by the German government to date is insufficient,” and that “it is imperative to expand these assistance measures quickly given the advanced age of many of the affected persons.”

Schneider said he hopes the upcoming negotiations will be completed by July. He noted that each year Germany has increased funding for survivors’ needs — almost doubling the amount in the last two years to $108.9 million in 2016 — but that “needs are outpacing the funding.”

And he said the Claims Conference itself is “running out of money” received from the recovery and sale of unclaimed Jewish property in the former East Germany.

Lawrence-Israels, coordinator of the Holocaust survivors’ group in Greater Washington, said that before the medical alert button could be taken from the 90-year-old Maryland survivor, The Blue Card was contacted. The nonprofit agreed to pay the monthly fee from a fund created specifically to cover such costs.

Milana Baazov, The Blue Card’s associate executive director, said its mission is to “ensure that all needs of survivors are met. Whenever a referring agency can’t provide help, we step in to make sure there is no gap in survivors’ needs. Our mission is to make sure that survivors live in their homes and not be institutionalized. We are the agency of last resort.”

There are an estimated 500,000 survivors worldwide, about 100,000 of whom live in the United States. About one-third of survivors in the U.S. live near or below the poverty level, most of whom are from the former Soviet Union, Schneider said.

The Blue Card has seen its caseload increase from about 1,900 households five years ago to 2,500 today — about 3,500 individual survivors, according to Baazov.

“Survivors are turning more and more to us,” she said. “We have a survivor who is 107 years old and lives in Brooklyn. The needs of the survivors are astronomical. There are more survivors coming forward now because they are losing spouses, which is half of their income.”

Lawrence-Israels said the cutbacks her members are experiencing in Washington are untenable. She cited the case of another 90-year-old survivor in Rockville, Md., who was just informed that JSSA was cutting by half the amount it would pay for her medication.

“This is a woman who was shot in a concentration camp and walks with a limp,” Lawrence-Israels said. “Slowly, the survivors in our area are being told that more and more services are being taken away from them.”