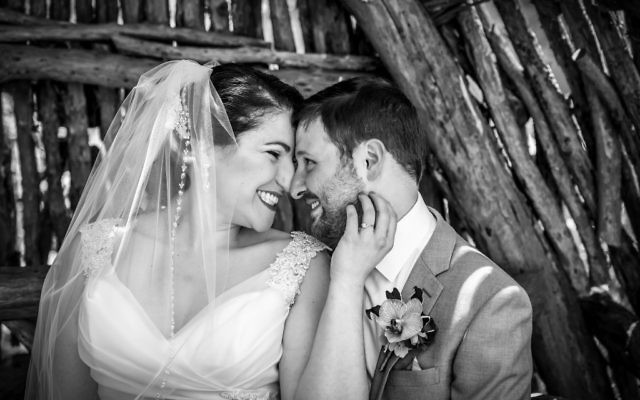 Teem GoodLev: Eric and Lauren on their wedding day in New Jersey. Courtesy of Janet Lanza

“We both swiped ‘right’ for each other,” smiles Lauren Levy, the cantor at Beth David Reform Congregation in Gladwyne, Pennsylvania.  In June 2015, Lauren met Eric Goodman, a physician, on JSwipe, the dating app, which has been described as the Jewish Tinder.

Lauren, then 32, “liked” Eric’s profile. In particular, she recalls, “He was cute and there were no typos in his intro.”  She continues: “I wouldn’t have met him on other sites.  I’m 5’10, like to wear heels and had always searched for guys my height or taller.  It was our extreme good fortune that JSwipe did not have height parameters in their search function.”

When they met, Eric, 5’8”, was not intimidated by Lauren’s height nor by the fact that she was in cantorial school. “I have always looked up to clergy,” he beams.

“He was cute and there were no typos in his intro.”

JSwipe declared them a match with joyous shouts of “mazal tov.”  About a week later, the couple met for drinks in the Flatiron district of Manhattan. “Our first date lasted for hours and hours,” recalls Eric, then 30.  “We realized from the beginning that we shared the same values.  Interestingly, I had wanted to be a rabbi at one point and Lauren had wanted to become a physician. We may have switched, but we both ended up in caring professions.”

Eric, a Brandeis University graduate, received his medical degree from Weill Cornell Medical College. Lauren graduated from the University of Pennsylvania and received a master’s degree in vocal performance and opera from the University of Miami.  Her cantorial ordination is from the Debbie Friedman School of Sacred Music at the Hebrew Union College-Jewish Institute of Religion in New York.

“We’re silly and fun together,” says Lauren. “We share many interests, especially music. Eric has a beautiful voice and enjoys participating in Shabbat services.”

At home, he cooks and she handles the power tools. Seeking a balance between tradition, independence, and equality, before proposing, Eric called Lauren’s parents not to ask for their permission, but rather to ask for their blessing, which was given “with great joy.” Lauren did the same with Eric’s parents.

“Joy will come to my lips when I sing melodies to you.”

Cantor Benjie Schiller, Lauren’s professor and mentor, officiated at the wedding. When Cantor Schiller asked for a quote that was most meaningful to them, the couple chose Psalms 71:23.  “Joy will come to my lips when I sing melodies to you.”  Lauren explains: “Joy is the key to our relationship.”

Eric agrees, even when commuting for five hours each day for six months before their wedding. They were living in Philadelphia and his job was still in Manhattan.  Eric now has a clinical fellowship in hospice and palliative medicine at the University of Pennsylvania in Philadelphia.

Under the chuppah, Cantor Schiller spoke about the nickname the couple had chosen for themselves – “Team GoodLev,” a combination of their last names, Goodman and Levy.  Since Lev is the Hebrew word for heart, the nickname reflects the good heartedness the couple strives for, towards each other and those around them.

Lauren and Eric were married on May 21, 2017 at the Grounds for Sculpture, a sculpture park and museum in Hamilton Township, New Jersey. Mazal tov.