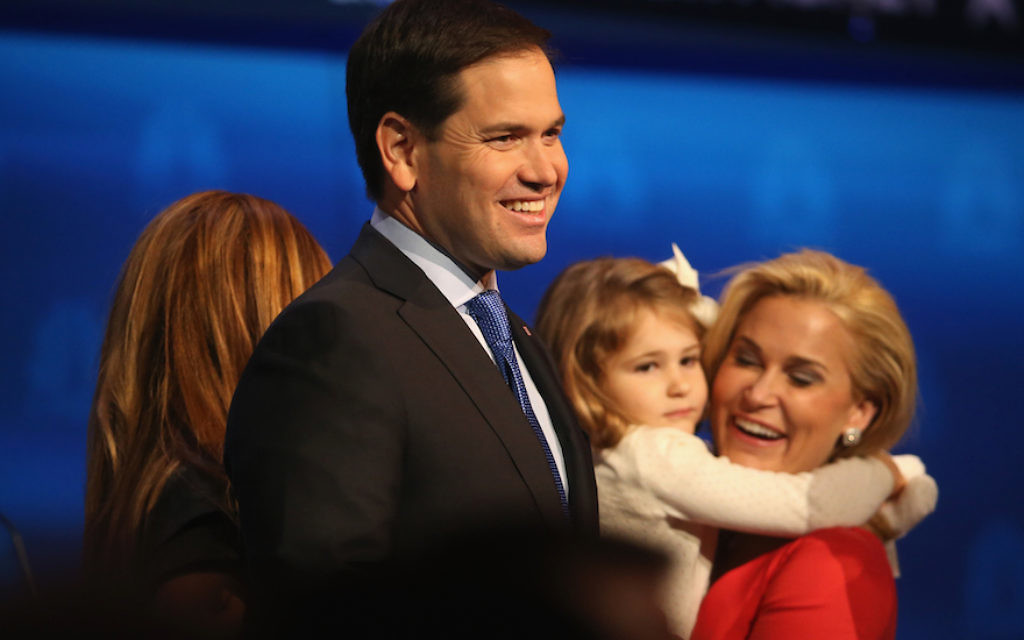 After Marco Rubio’s strong performance in Wednesday night’s Republican primary debate, many Americans are taking a second look at the U.S. senator from Florida. Here are a few things American Jews might want to know about him.

The junior senator was born in Miami in 1971 to Cuban parents who moved to the United States in 1956 and later found work in bartending and housekeeping. After high school, Rubio paid for his first year of college with a football scholarship and then took out student loans. Rubio later repaid $100,000 in student debt out of the $800,000 advance he received for his 2012 book, “An American Son

.” (He also sprung for a fishing boat.) While studying law at the University of Miami in the mid-1990s, Rubio interned for Rep. Ileana Ros-Lehtinen, R.-Fla., the first Cuban American elected to Congress and a staunch supporter of Israel. Rubio won election in 2000 to the state legislature, the Florida House of Representatives, and became its youngest-ever speaker in 2005. In 2010, Rubio was elected to the U.S. Senate, defeating Florida’s governor, Charlie Crist.

2. Rubio’s biggest patron is a past president of the Miami Jewish federation

3. … But Sheldon Adelson may not be far behind

Rubio may be the candidate of choice for Jewish casino magnate Sheldon Adelson, who spent between $100 million and $150 million of his estimated $32 billion fortune backing Republicans in the 2012 presidential campaign. Sources close to Adelson told Politico in April that the billionaire likes the Florida senator’s strong stance on defense, including his strident support for Israel. And after Rubio declared he’d run for president, the Adelson-owned Israeli newspaper, Israel Hayom, gave Rubio coverage some reviewers described as “fawning.”

4. Where is Rubio on issues of concern to Jews?

On domestic issues, Rubio wants to repeal Obamacare, opposes abortion and has waffled on immigration reform. First, as a member of the so-called Gang of Eight, Rubio championed a comprehensive immigration reform bill that would have opened a path to citizenship for some undocumented immigrants. But he backed away from that strategy once the bill failed and instead suggested a more piecemeal approach focusing first on border enforcement. On foreign policy, Rubio is a vocal Israel backer, opposed the Iran nuclear deal and wants stepped-up Iran sanctions and favors a permanent U.S. presence in Iraq to fight the Islamic State. Rubio also opposes the Obama administration’s normalization of ties with Cuba.

5. Is it true that Rubio was once a Mormon?

Yes. Though born a Catholic and now a Catholic, Rubio spent three years of his youth as a Mormon after his parents baptized him in the Church of Jesus Christ of Latter-Day Saints while they were living in Las Vegas. In the early 2000s, Rubio attended a Southern Baptist church, Miami’s Christ Fellowship, for about four years, and donated at least $50,000 to it. Nowadays, he goes to Catholic mass on Sundays, according to his book.

Like practically all of his fellow Republican candidates for president, Rubio has taken a hawkish line when it comes to Israel, slamming the Obama administration’s treatment of the country and Israeli Prime Minister Benjamin Netanyahu. “If America doesn’t stand with Israel, who would we stand with? If Israel — a democracy, a strong American ally on the international stage — if they are not worthy of our unconditional support, then what ally of ours around the world can feel safe in their alliance with us?” Rubio said in a Senate speech on March 19.

7. What’s this I hear about Rubio and Hitler?

In September, Rep. Debbie Wasserman Schultz, chairwoman of the Democratic National Committee, blasted Rubio for doing a fundraising event on Yom Kippur at the Texas home of Harlan Crow, a conservative philanthropist whose art collection includes two works by Adolf Hitler, a signed copy of “Mein Kampf,” and “cabinet full of place settings and linens used by the Nazi leader,” according to Wasserman Schultz. Rubio’s defenders called the attack a cheap shot, noting that the Nazi memorabilia constitutes a tiny part of Crow’s very large collection and had nothing to do with Rubio’s fundraiser.

8. Rubio went to bat for justice for Alberto Nisman

After the mysterious killing in January of Argentine prosecutor Alberto Nisman, who was investigating the 1994 terrorist attack on the AMIA Jewish community center in Buenos Aires, Rubio called on Secretary of State John Kerry to establish an independent, international probe into Nisman’s death. Rubio questioned the ability of Argentina’s government to conduct a fair investigation (Nisman had accused Argentine President Cristina Fernandez de Kirchner of impeding the AMIA investigation), prompting a rebuke from Argentina’s government for his meddling and “imperious behavior.”