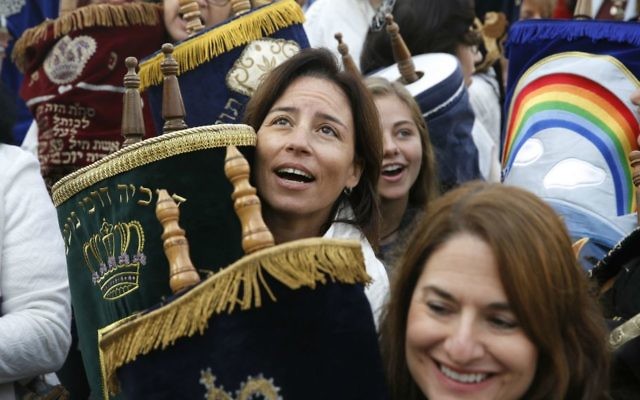 Israeli members of Women of the Wall, carry a Torah scroll during prayers in the women's section of the Western Wall on November 2, 2016. Getty Images

I have been a regular attendee at partnership minyanim in London for a few years now. But some drama in shul this week shed some new light on the meaning of “Kavod Hatzibur.”

Megilla 23b states: “Our rabbis taught: Anyone can be counted as one of the seven prescribed readers, even a minor and even a woman. But the Sages said (aval amru hachamim): ‘A woman should not read from the torah, because of the dignity of the community.'”

In other words, even though the Gemara has no halachic problem with women being called up to the torah and reading from it, the Sages advised against it to avoid offending the community. The rabbis are perhaps concerned that a woman reading would indicate that none of the men present were capable of doing so themselves.

On Shabbat I attended a partnership minyan, set up by a dedicated group of people specifically intending to create a community of like-minded individuals who not only would not be offended by women reading from a torah. In fact, they would be offended if women were excluded from reading from a sefer torah! It seemed, therefore, that the Gemara’s concern with Kavod Hatzibur had been carefully addressed.

I did not notice at the time, but in error, the sefer torah was not taken around the men’s section when it was taken out of the ark. I don’t think this has happened before, and everyone present was aware that it simply an oversight.

The parasha was Lech-Lecha, and the third aliyah recounts Abram’s discussions with Lot about where to settle, and on the first mention of the word “Abram” the oleh (male) attempted to correct the ba’alat kriyah (female) that she had said Abraham instead of Abram in error. The consensus was she had pronounced it correctly, and she continued.

But he corrected her again when the word came up a second time, and once again the community said it was correct. And then he corrected her a third time, so that the ba’alat kriyah reluctantly had to speak, asking that only the gabaim correct her. At that point the oleh stormed off and left the shul mid aliyah.

I cannot help but think that, in spite of willingly attending a partnership minyan, he had lost sight of the reason why such spaces were created in the first place. Supporting a partnership minyan is not only about giving women opportunities in name; it’s about trusting that women are equally capable of leading our community in tefillah. This experience has brought a whole new meaning to the word ”manspleyning.”

I heard that this man was quite upset that the sefer torah was not brought around the men’s section at the beginning of the torah service, in spite of the fact that he was assured it was an oversight. I wonder if he could see the irony of this. He felt justified in being upset over an oversight, whereas women in Orthodox synagogues every week are expected to happily accept that the sefer torah will not come around their section, even though they are aware its absence is intentional.

It occurred to be that this is why the rabbis warned against women reading from a sefer torah. In their time, and sadly in ours as well, many men do not have respect for women. As I saw this week, a woman reading from the sefer torah doesn’t work unless every person in the community trusts women to leyn. Kavod Hatzibur is not just about accepting that women can read from a sefer torah, but it is about men having enough respect for women to trust that are not a threat to tradition.

Eve Sacks is a member of the board of trustees for JOFA UK.