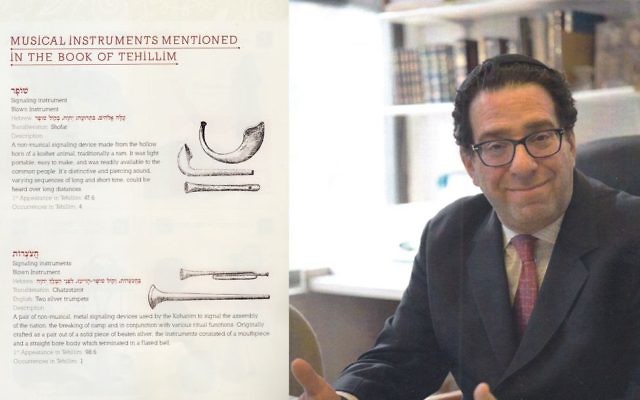 While studying how prayer took place in the ancient Jerusalem Holy Temple for an adult education course he was teaching a decade ago, Manhattan jewelry business owner Reuben Ebrahimoff became intrigued by the music that accompanied the worship services.

More research followed as he plowed through 75 books. He was particularly interested in the theological and historical background of Tehillim, the Torah’s 150 Psalms that traditionally were sung in ancient times.

The result is the newly released “From Your Lips to God’s Ears,” Ebrahimoff’s encyclopedic (533 pages), self-published guide to Tehillim. The book includes the Hebrew and English text of every Psalm, the historical context and putative authorship of each one, the Levites’ musical accompaniment to the sacrifices brought by the Kohanim in the Temple, an explanation of the Psalms’ meaning, a discussion of “obscure words” that appear in some of the Psalms and other facts that will guide a reader in understanding Tehillim.

The Psalms, Ebrahimoff says, are taken for granted as part of the Jewish prayer experience, found in excerpts and entire chapters throughout a traditional siddur; he wants to shine a fresh light on them.

Ebrahimoff, a member of a family of Mashadi Jews from Iran who came to the States in 1958, has earned the title of “Haftorahman” for his expertise in the prophetical readings that follow the Torah reading in synagogue every Shabbat. He calls his Tehillim book (fromyourlipstogodsear.com) an attempt to demonstrate the contemporary relevance of the Psalms, which many people — Jews and non-Jews — recite on a regular basis but without fully understanding them.

The book is not for people who recite the Psalms rapidly, as many Jews do on a daily basis, Ebrahimoff said. “It empowers people to upgrade their communication with God,” to concentrate on the not always obvious meaning of the words. He said that reading Psalms each day, as he does, “gives me a pathway to God.”

“The Tehillim of 3,000 years ago,” which discuss such eternal topics as fear and faith and disappointment, “are relevant to today,” he said, stressing the importance of the music that was part of the worship experience in the Temple. “The music elevated the kedushah” [holiness] level of the priestly sacrifices, he said.

An example: Psalm 23, “The Lord is my shepherd,” Ebrahimoff’s favorite part of Tehillim. Attributed to King David, recited as part of a Jewish funeral liturgy and in many congregations on Friday night, with “musical accompaniment” in the Temple, it expresses a worshipper’s “absolute certainty that his prayers will be heard,” the book states.