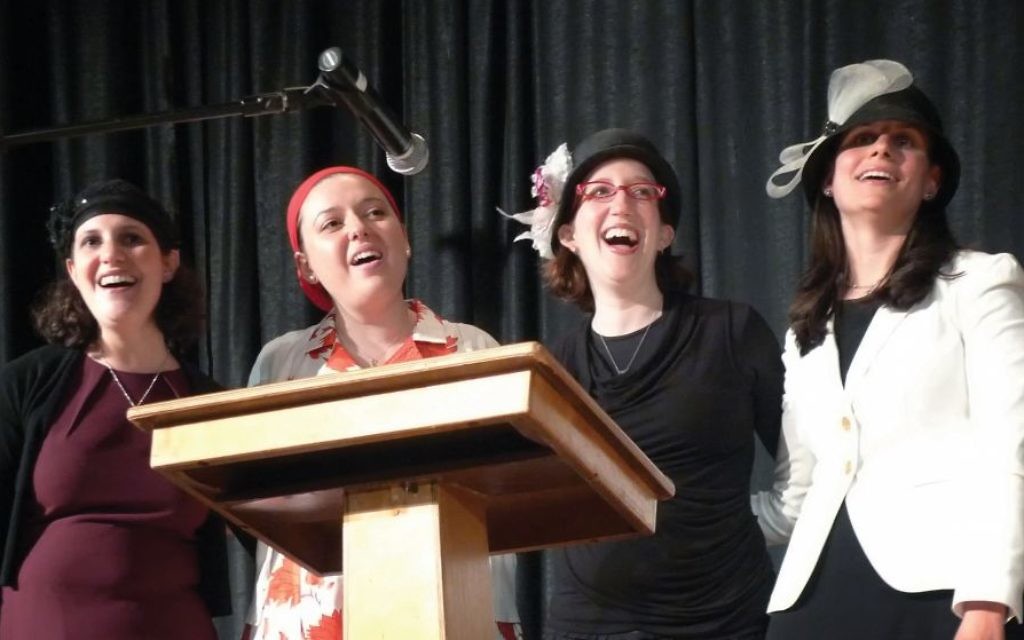 It was a rite of spring, as graduations are.

But this one, like Stravinsky’s 100-year-old musical score, was a controversial and bold break with tradition and all that came before.

On Sunday morning, the Ramaz School on Manhattan’s Upper East Side was the location for the inaugural graduation ceremony of Yeshivat Maharat, a landmark event in Jewish history. (Ramaz leased the space, with authorization from Rabbi Haskel Lookstein, its principal, and a prominent Modern Orthodox rabbi who has neither publicly endorsed nor criticized Yeshivat Maharat.)

For the first time, members of the Orthodox community ordained three women as halachic and spiritual leaders of the community.

More than 500 people poured in from all over the United States and Canada, while countless others watched online as the graduates were granted semicha, or ordination, with the bestowal of a parchment and the recitation of a specially chosen biblical phrase: “Our sister, may you become a multitude.” (Genesis 24:60)

Their title, however, is not “rabbi” (or “rabba,” the feminine form). Rather, in a concession to the opponents of female ordination, the three graduates and the other 11 candidates in upcoming classes, are to be known as maharat, a Hebrew acronym that stands for “manhiga hilchatit ruchanit toranit,” or female legal, spiritual and Torah leader.

The matter of a newly minted title did little to dampen spirits as a diverse group including men in dark suits and prominent Orthodox and Reform rabbis, embraced in the crowded lobby and turbaned women in summer dresses bubbled with joy. One woman in the crowd called this “a completely surreal milestone.” Rabbi Daniel Smokler, an event organizer, said, “This changes the face of Orthodox Judaism, quite literally. There’s never been anything like it, and there’s more in the pipeline.”

On stage, the three graduates, Rachel Kohl Finegold, Ruth Balinsky Friedman, Abby Brown Scheier and their mentors looked out on a crowd of cheering supporters from across Jewish denominations. There were shout-outs to Rabbi David Ellenson, president of the Reform movement’s Hebrew Union College, and to the Reform Rabbi Sally Priesand, the first American woman (and the second woman ever) to be ordained a rabbi.

Opening the ceremony, the seminary’s rosh yeshiva (yeshiva head) Rabbi Jeffrey Fox, began with a reference to the centennial of Igor Stravinsky’s “Les Sacre du Printemps” (“The Rite of Spring”), a now-accepted ballet score once considered so radical that “it brought people to blows.” A short video emphasized that the maharat stands on the shoulders of the great Chofetz Chaim and Orthodoxy’s once controversial Beis Ya’akov schools for girls. Speakers harkened back to groundbreaking “study groups in Drisha Founder Rabbi David Silber’s living room” and the early dreams of Jewish Orthodox Feminist Alliance Founder Blu Greenberg for a more egalitarian Orthodox leadership.

Rabbi Avi Weiss, Yeshivat Maharat’s champion and founder, made the point that “there is no halachic prohibition,” against ordaining women, exulting in the “dream fulfilled in our lifetime.” He repeated a phrase from the Song of Songs like a mantra: “Hashme’enee et kolech,” or let me hear your voice. He added, “Your voice as poseket is sweet,” a not-so-subtle response to critics on the right who would be appalled by female legal arbiters and who often invoke the prohibition of “kol isha” to silence women entirely.

In her closing remarks, Rabba Sara Hurwitz, the school’s dean (and the only woman to receive the title rabba before its revocation) said, “This is the beginning of a new reality. This is what the Orthodox community looks like with men and women standing side by side. This room is made up of visionaries and risk-takers.”

The room rose as one to sing the Shehecheyanu blessing. A group of women paused in the lobby to join in a circle dance before the celebration continued with a buffet on the spacious outdoor terrace.

While all would agree that the women are closing a gap and meeting a real communal need, some in the audience spoke frankly of the hard-wired systemic obstacles still facing the maharats, who will be accepted only among the most liberal of Orthodox. Underlining that fact, the centrist Orthodox Rabbinical Council of America released a statement last month saying, “we cannot accept either the ordination of women or the recognition of women as members of the rabbinate, regardless of title.”

A prominent Orthodox educator with more progressive sensibilities, who asked not to be identified, told The Jewish Week, “This is like graduating medical school, but not being allowed to call yourself a doctor.”

Aaron Friedman, a yeshiva-educated real estate lawyer from Teaneck, N.J., whose eyes brimmed with tears throughout the ceremony, championed the women’s high degree of learning as a bulwark against feared backlash. “If the haredim [ultra-Orthodox] could aim attacks on that level, they would. But no one is saying they aren’t learned enough.”

Beyond the beit midrash, economics weigh in. While the demand for employment is so far keeping up with the supply — all three graduates and at least one member of the next class are employed — these positions are largely being underwritten by wealthy women supporters. The maharats are assuming subordinate educational and pastoral responsibilities (as do most young grads). It remains to be seen if any will be granted institutionally budgeted, senior positions within the Orthodox world in the near future.

With that in mind, the three maharats are careful to minimize, rather than challenge, the still extant limitations. They will not be counted in a minyan, called to the Torah or serve as witnesses. Rabba Hurwitz nonetheless insists that their clerical duties have “a 100 percent overlap” with male rabbis, adding that it is not their task “to make up the minyan, but only to be sure that there is one.”

It remains an open question as to how the ordination of Orthodox women will influence the evolution of the clergy’s role and the community it serves. Ruth Balinsky Friedman predicts that work-life balance will have to adapt. She said, “I was the only maharat who didn’t have to breastfeed two minutes before the ceremony.”

Meanwhile, all the assembled marveled at Kohl Finegold arriving from Montreal with her third daughter, who is less than two weeks old. (Brown Scheier, infant in tow, shares a “fun fact”: Seven babies have been born to 14 maharat students and all of them are girls. “We like our trend,” she smiles meaningfully.)

Maharats’ roles as mothers may influence systemic change as they increasingly arbitrate Jewish law. Elana Maryles Sztokman, JOFA’s executive director, explained, “Women are expected to be community-minded caregivers and nurturers. That experience is often absent from halachic thinking, but women will bring that with them.”

Orthodox feminist pioneer, Greenberg, who hailed the graduation as “a sea change,” sees possible ramifications for the persistent issue of the aguna (a woman whose husband refuses her a divorce.) “We need to move away from gender typology,” she said. “But women do look at some issues differently. It is interesting that most of the aguna activists have been women, and all of the poskim [halachic decisors] are men. Perhaps if women poskot see the urgency, they will find solutions.”

Activist women outside of the Orthodox community are vocal in their enthusiastic support.

Interviewed before the ordination, Rabbi Jan Uhrbach, founder of NAHAR, an egalitarian minyan on the Upper West Side, hailed it as a vital step in healing rifts. “Halacha does not evolve in a vacuum — it happens on multiple levels,” she said. “One-on-one relationships are hugely important.”

Rhonda Spinack, director of the Jewish Women’s Theatre, added, “For progressives, they are already rabbis.”

And Shifra Bronznick, founder of Advancing Women Professionals, said, as she was leaving the ordination, “Finally women will be co-authoring the Jewish narrative. I literally felt the world shift to make room.”

It seems inevitable that this ordination will widen an already apparent split between Modern Orthodoxy and the haredi community. Aaron Friedman ventures that the maharats may inadvertently “influence the ultra-Orthodox to upgrade the caliber of their pulpit rabbis, just to keep up with the standard set by these young women.”

One thing is certain, say observers: there is no going backwards. As Rabba Hurwitz said in her charge to the graduates: “It took many years for the Orthodox community to mature to this point. Go forward. As you march, the entire community walks with you.”

Susan Reimer-Torn blogs at susanrtorn.wordpress.com and is the author of the upcoming memoir, “Maybe Not Such a Good Girl.