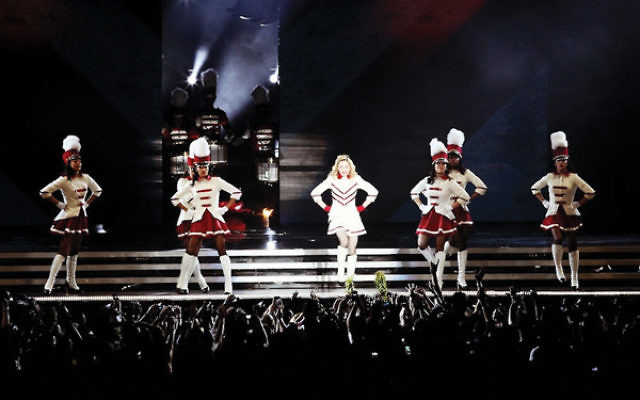 JERUSALEM (JTA) — Pop icon Madonna said she will not cancel her Eurovision appearance due to calls for a boycott and that she will always call out human rights violations around the world.

Madonna reportedly is scheduled to perform at the Eurovision finals on Saturday night in Tel Aviv.

Pro-Palestinian activists have called for performers and fans to boycott the competition, and have reached out directly to Madonna.

“I’ll never stop playing music to suit someone’s political agenda nor will I stop speaking out against violations of human rights wherever in the world they may be,” Madonna said in a statement to Reuters.

“My heart breaks every time I hear about the innocent lives that are lost in this region and the violence that is so often perpetuated to suit the political goals of people who benefit from this ancient conflict. I hope and pray that we will soon break free from this terrible cycle of destruction and create a new path towards peace,” she also said.

Madonna’s Ray of Light foundation, which promotes social justice and women’s empowerment worldwide, supports a number of Palestinian projects, according to Reuters.

She is expected to arrive in Israel on Wednesday with an entourage of some 135. Her stage set and some of her equipment reportedly arrived on Monday.

Meanwhile, the chief executive of Eurovision told reporters on Monday that it is not yet clear whether the 60-year-old singer will take the stage on Saturday night since she has not signed a contract with the European Broadcasting Contest. Jon Ola Sand said the union is still negotiating the terms of the contract with her and that “if we do not have a signed contract she cannot perform on our stage.”

Israeli-Canadian billionaire Sylvan Adams is paying the cost of her performance, estimated at about $1.3 million.