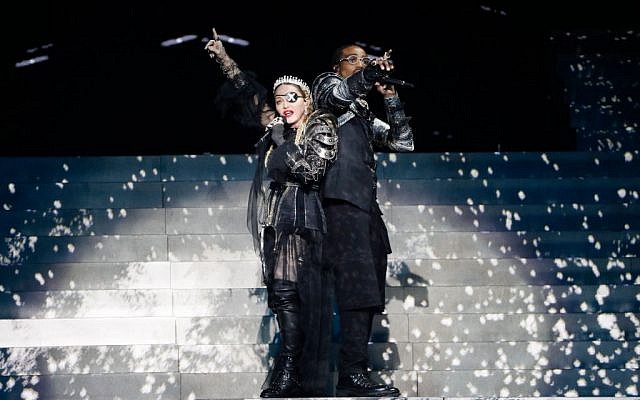 JERUSALEM (JTA) — Pop idol Madonna made a political statement about the Israeli-Palestinian conflict on stage at Eurovision in Tel Aviv.

She later was reprimanded by the European Broadcasting Union, or EBU, which produced the event with the host country.

Madonna, 60, played two songs on Saturday night during the international song contest. She performed a slightly off-key version of “Like A Prayer” to mark the 30th anniversary of the hit song’s release, and her newest single “Future” with guest star Quavo.

The EBU issued statements after the incidents. Of the Madonna protest it said: “this element of the performance was not part of the rehearsals that had been cleared with the EBU and the Host Broadcaster, KAN. The Eurovision Song Contest is a non-political event and Madonna had been made aware of this.”

The EBU said it was considering punishing Iceland for the actions of its contestants.  “The Eurovision Song Contest is a non-political event and this directly contradicts the contest rules. The banners were quickly removed and the consequences of this action will be discussed” by the contest’s executive board,” it said in a second statement.