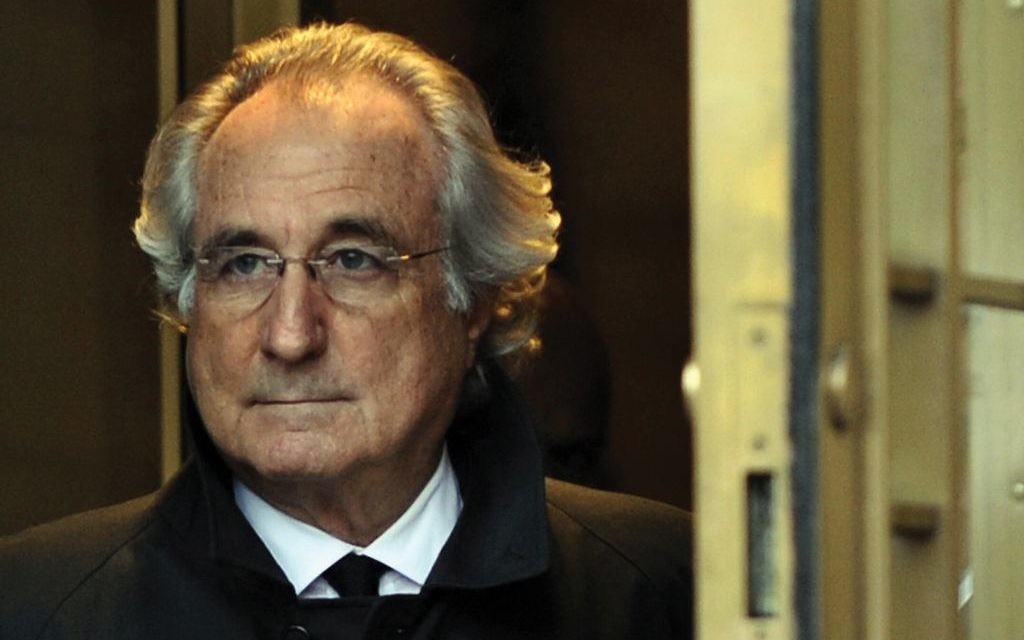 Sholem Aleichem, who lost his money in the Odessa stock market, used to say that when you’re rich, people think you’re not only clever but handsome, with a voice like a nightingale.

And for years, Bernard Madoff — it was always “Bernie,” pals to the rich and insiders — was so clever, so flattered, that just about anyone who was anyone in the Jewish community trusted Madoff Securities with their millions of dollars; from Sandy Koufax to Elie Wiesel, from Israel’s Technion to Hadassah. In 1996, like asking Clyde Barrow to guard a bank, Yeshiva University asked Madoff to be a trustee, where he advised the other YU trustees, many of whom were savvy businessmen, to invest $100 million of the university’s money with Madoff, yet another piece of a Ponzi scheme that exploded in 2008.

Now 75, Madoff lives with another convict in an 8-by-10 cell at Butner federal prison in North Carolina for 150 years or death, whichever comes first. Five years after his conviction, in a March 20 jailhouse interview with Politico, Madoff was asked if he had any remorse about the “disproportionate devastation” of Jews who lost a staggering amount of money, close to $400 million, by investing with him. No, said Madoff, “I don’t feel that I betrayed the Jews. … I don’t feel any worse for a Jewish person than I do for a Catholic person. … I betrayed people that put trust in me — certainly the Jewish community. I’ve made more money for Jewish people and charities than I’ve lost.”

The reporter for Politico, M.J. Lee, says she kept pressing him on his denial of betraying Jews “because that answer surprised me so much.” But Madoff insisted he didn’t hurt one group more than another. “Religion,” says Madoff, “had nothing to do with it.” For Madoff, it never did.

Madoff was the master of the “long con,” the confidence game that takes years to cook. It was Jews, more than anyone, who had confidence in him, one of their own. He gained the confidence of Jews in country clubs on Long Island and in Palm Beach and, it was reported, “through his position on the boards of directors of prominent Jewish institutions, he was entrusted with entire family fortunes.”

On the one hand, Rabbi Brad Hirschfield, co-president of CLAL – the National Center for Learning and Leadership, says, “This whole story says more about those Jews who attach importance to Madoff’s Jewishness, than it says about Madoff.”

The most Jewish thing about him is his victims. “Jews were disproportionately affected by Madoff’s crimes,” says Rabbi Hirschfield, “as all so-called Ponzi schemes play on ethnic, cultural or religious ties. It’s also why Jews disproportionally profited from him before the whole thing came apart. Each side focuses on the half of the story that they want to, but both are true.”

One Jewish leader, who asked not to be identified, noted that “Madoff simply thinks like most liberal and under-35 American Jews increasingly do: wronging a Jew or a non-Jew is equally wrong, as there is no unique special responsibility to Jews. Of course, the irony of this is that the wealthy Jewish class who were the primary victims of Madoff assumed they had some special inside connection with a fellow Jew, and so Madoff could be trusted. Greed, confusing being wealthy with being good, all combined with the delusion of Jewish ethical superiority to create the perfect Madoff storm.”

(On Monday, three days after the Politico interview appeared, a federal jury found five of Madoff’s former business associates guilty of security fraud and misleading auditors and investors. They could face up to 30 years in prison.)

You couldn’t come up with a list like that among Catholic schools or secular charities, though here and there were investors such as the Korea Teachers Pension (losers of $9.1 million).

As Samuel G. Freedman reported in 2008 in The New York Times, “the conspicuous fact remains that no institutions explicitly, or even implicitly, affiliated with Reform, Conservative or Reconstructionist Judaism had investments with Mr. Madoff. How exactly Mr. Madoff earned entree to the Modern Orthodox community, especially in Manhattan, remains unclear. By most accounts, he is not Orthodox himself. But one of his middlemen, J. Ezra Merkin… is a fixture of the community,” someone who once had been a president of the Fifth Avenue Synagogue, a board member at Ramaz and SAR, and a trustee of Yeshiva University.

All of this seems long ago and far away, except it’s not. Yeshiva University’s investment rating, for example, according to Moody’s Investors Service, is in free-fall. “In January, Moody’s downgraded Yeshiva to junk bond status. In 2008, before the Madoff scandal broke, Yeshiva was ranked by Moody’s at Aa2, the third-highest grade. According to Bloomberg News. “The university was in the midst of ambitious growth when Madoff’s Ponzi scheme unraveled, adding faculty and expanding campuses around New York.” The university is now selling 10 buildings, two-thirds of the university’s housekeeping staff has left, and some academic departments have been ordered to slash 20 percent of costs.

It wasn’t until after Madoff’s arrest that YU adopted a conflict-of-interest rule that the university could not do business with board members, such as the business between Madoff and Merkin. The scandal, says Bayme of the AJC, “caused virtually everyone to evaluate the way they’re doing business. It sent shock waves through the community, with lessons to be learned, in terms of governance, conflicts of interest, and people are a lot more careful and judicious about these things than they were five years ago. It was a rude awakening. This is something I’ve seen all over. These five years have caused considerable re-evaluation in practices and policies.”

One Jewish leader who asked for anonymity, told us that he wondered how much introspection there really has been about “the culture we have created regarding money and influence.”

One rabbi, the head of a Jewish institution that was indeed “betrayed” by Madoff, preferred not to comment on anything Madoff had to say. “Let him rot in jail,” the rabbi said.