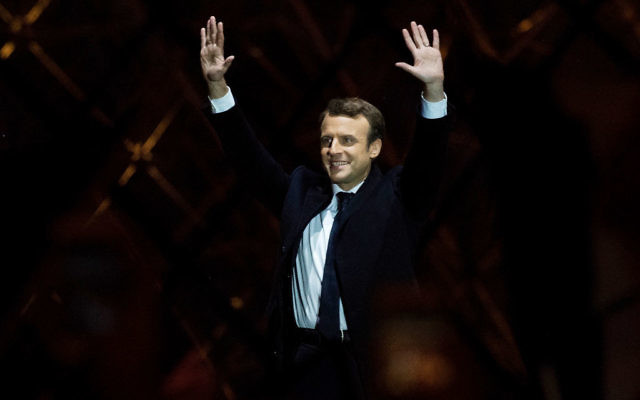 PARIS, FRANCE - MAY 07: Leader of 'En Marche !' Emmanuel Macron addresses supporters after winning the French Presidential Election, at The Louvre on May 7, 2017 in Paris, France. Pro-EU centrist Macron is the next president of France after defeating far right rival Marine Le Pen by a comfortable margin, estimates indicate.Getty Images

However, although her bid to lead the country failed, Le Pen’s divisive campaign against Macron did achieve at least five goals that her supporters have sought for years.

Under Le Pen, her National Front went from being a fringe movement with no real shot at achieving power to a veritable contender. Her  presidential bid was supported by 34.5 percent of French voters, according to exit polls from Sunday’s election. It is by far the party’s best electoral performance since its establishment in the 1970s.

While this support may diminish over the next five years, National Front is now indubitably a major political power and a legitimate choice in the eyes of a third of the electorate. 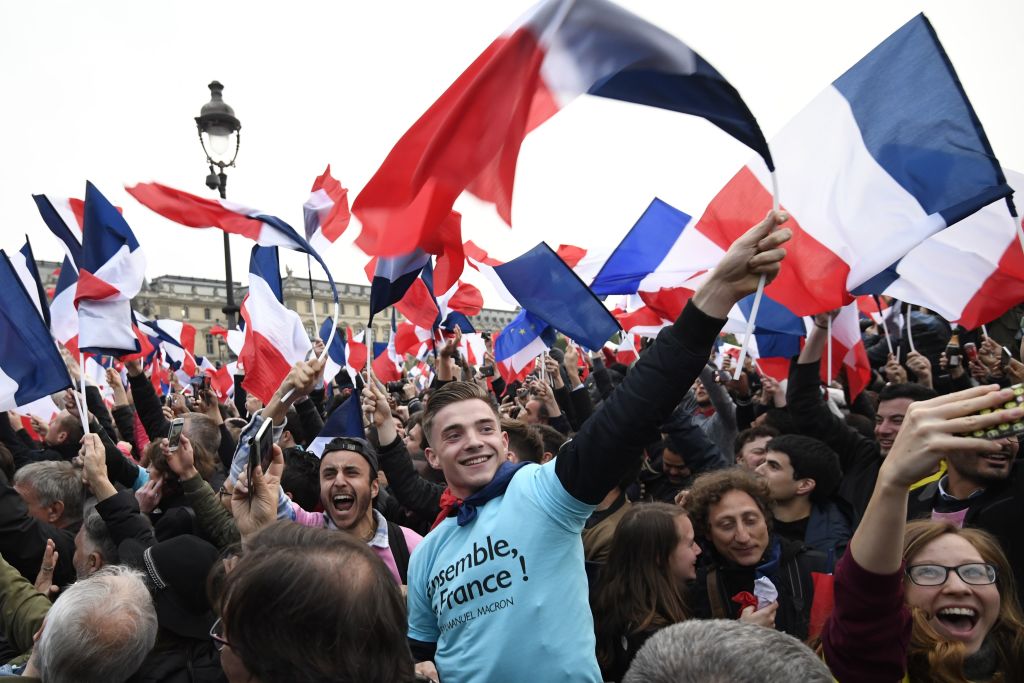 Le Pen referenced this during an interview on Friday, saying: “We moved everything, we have changed everything already.”

This transition was difficult to pull off and it came with a personal price for Le Pen, who has had a public falling out with her father and mentor, Jean-Marie Le Pen.

Convicted multiple times for Holocaust denial and incitement of racial hatred against Jews, Jean-Marie Le Pen is a hero to the hardcore of the French ultra-right for his apparent disregard for both France’s laws against hate speech, and that rhetoric’s political cost.

Since taking over the leadership of the party in 2011, Marine Le Pen has worked to rehabilitate its public image by distancing the party from the racist rhetoric favored by her father, the party’s founder.

He lost control of the party to a new generation of National Front politicians, led by his daughter, who viewed his provocations as an impediment to making the party a real contender. Which is why Marine Le Pen in 2015 kicked her father, as well as dozens of other politicians who made anti-Semitic remarks, out of the party.

Still, Marine Le Pen has remained the far-right’s go-to candidate thanks to her insistence on a ban on Jewish and Muslim religious symbols and ritual slaughter, and bans on  immigration by Muslims, among other discriminatory policies.

Jean-Marie Le Pen had to go because he “personifies the ultra-right that does not seek to reach power” in a form of “self-destruction,” Florian Philippot, a National Front vice president and ally of Marine Le Pen, said in 2015 in an interview.

Philippot may have been overstating things — in the 2002 presidential elections, the party attracted a respectable  18 percent of the vote. Still, Marine Le Pen has clearly taken National Front to a whole new level of acceptability — while retaining the spirit of its founding mission.

Whereas the general population was divided 65-34 percent during the elections, the communal representatives of French Jews and Muslims mobilized almost without exception for Macron.

In both communities, even clergy abandoned their carefully cultivated non-partisanship in an unusual effort, the likes of which had not been seen in at least 15 years.

On Friday, French Chief Rabbi Haim Korsia co-authored, with the president of the Protestant Federation of France and a Muslim faith leader, a statement endorsing Macron. Tellingly, the Catholic Church of France, which by far the largest Christian denomination in the country, sat out the declaration.

“Fully aware that our roles require us to be non-partisan,” the three clergymen wrote, “peace supersedes all other things and only a vote for Emmanuel Macron guarantees” it.

The unusual statement followed efforts by French Jews to prevent a victory for Marine Le Pen on “a scale that was last witnessed in 2002, ahead of the runoff led by her father,” according to Philippe Karsenty, a Jewish Macron supporter and deputy mayor of the Paris  suburb of Neuilly-sur-Seine.

Originally supportive of Francois Fillon, the Republicans candidate who lost in the first round last month and who stands significantly to the right of Macron, Karsenty joined the Macron camp not because he believes in the candidate’s policies, but “to block Le Pen from ruining France,” as Karsenty put it in an interview with JTA Saturday.

CRIF, the federation of Jewish communities of France, called on all Jews and non-Jews to vote for Macron, describing Le Pen as a “danger for democracy.” And the Union of Jewish Students of France held a string of rallies against Le Pen, including a concert “against Fascism” on Friday.

While these efforts served as a show of unity within French Jewry and with other faith groups, they also cast a partisan light on French Jews and Muslims, which leaders of both communities have worked hard to avoid. And that has the potential of highlighting a distinction, favored by many Le Pen supporters, between these minorities and the general population.

At the same time, this may also reinforce stereotypes held by many Frenchmen about Jews and Muslims – presenting Le Pen and her party as the archenemy of groups that conspiracy theorists in France like to describe as cabals working in unison.

Critics of Le Pen — who has vowed to dismantle the European Union — warned that her victory would leave France internationally isolated.

In a world where international trade is more important than ever, her isolationist policies had the potential of making France “a pariah nation with no international allies,” according to a position paper published by the liberal think tank Terra Nova in March.

However, her campaign showed that National Front has allies from Washington to the Kremlin — and also among some of the leading politicians of countries that founded the very European Union that she is seeking to break down.

President Donald Trump, whom Le Pen endorsed openly during the U.S. presidential elections, returned the favor partially on April 21, when he offered what was widely interpreted as tacit support for Le Pen.

In March, Russian president Vladimir Putin hosted Le Pen at the Kremlin and reportedly wished her good luck in the elections — though he, too, insisted Russia did not have any favorites in the runoff. Macron did not visit the Kremlin during the campaign.

Still, Putin, a rival and critic of the European Union, seemed to have an unsurprising soft spot for the woman who vowed to dismantle it.

Several computer experts claimed that Russian operatives were behind the hacking of huge amounts of internal correspondence by Macron’s campaign, which were published 36 hours before the vote and presumably intended to sow chaos and discredit the front-runner.

Le Pen also has powerful allies within the European Union, including Geert Wilders, the far-right Dutch politician who in March led his Party for Freedom as it became, for the first time in its history, Holland’s second largest political movement. He publicly endorsed her.

So did Nigel Farage and his UKIP populist party in the United Kingdom, which lobbied forcefully and, ultimately, successfully, in favor of a “yea” vote in last year’s referendum on whether Britain should leave the European Union.

Reopening debate on the Holocaust

By uttering five words followed by the name of place that most young French have never heard of, Marine Le Pen has reopened a debate on France’s complicity during the Holocaust, potentially reversing the results of decades of soul-searching that led to a belated admission of guilt.

On April 9 she said:  “France is not responsible for Vel d’Hiv” — the name of a Paris stadium where French police officers in 1942 rounded up more than 13,000 Jews for the Nazi occupation forces, who had them sent to death camps. For decades after the war, France’s leaders equivocated about France’s responsibility for the deportations.

In 1995, former president Jacques Chirac delivered a landmark speech at Vel D’Hiv that for many had put the issue to rest.

“Yes, it is true that the criminal insanity of the occupying forces was supported by some French people and the French State,” Chirac said.

Coming amid stubborn resistance by the French railway company lawyers to demands that it assume responsibly for its central role in the deportations, Chirac’s speech was the first admission of collective guilt of its kind by a French head of state. He made it at what the Yad Vashem museum had for years called “a symbol of the responsibility of the regime and the French nation” for the Holocaust.

Marking a long and anguished journey by a nation that initially had perceived itself only as a victim of Nazism, Chirac’s speech opened the door to restitution agreements with the railway company. It also mainstreamed the consensus of historians, relegating apologists for French collaborators to the fringes.

The impact of Marine Le Pen’s revisionism is not yet clear. But again, more than a third of French voters supported a candidate who sought to whitewash the historical record.

And, according to some observers, it has politicized the Holocaust in a way that did not exist before the campaign.

Following Le Pen’s remark, Macron, on April 30, visited the Memorial for the Martyrs of the Deportation in Paris during the last stretch of his presidential campaign. The gesture, however well-intended, infuriated the French Jewish philosopher Alain Finkielkraut and other critics. Finklekraut said he was “furious” at Macron for “making the extermination of Jews a campaign argument.”

While the Jewish establishment rejected Marine Le Pen and her party, this has not prevented Le Pen from making significant inroads into the Jewish community and in Israel.

According to a 2014 poll, 13.5 percent of Jewish voters said they would vote from her.

And while that figure is significantly lower than Le Pen’s approval rating in the general population, it is a major achievement for Marine Le Pen considering the nearly nonexistent support that her father got from Jews.

Numbering approximately 500,000, French Jews lack the electoral weight to determine a major political campaign nationally. But Jewish supporters are nonetheless necessary for Le Pen in her attempts to argue that her party has changed for the better.

Indeed, Marine Le Pen’s life partner, Louis Aliot, makes no secret of his Jewish origins. Aliot has recently visited Israel, where he met in January with a low-level representative of Israel’s Likud party.

Under Le Pen, the party has an active club of Jewish supporters, the Association for Patriots of Jewish Faith, led by Michel Thooris, a 36-year-old police officer who is also a member of the Central Board of the National Front.

She has secured Jewish support by saying that Jews are allies of other French people endangered by Islam — a potentially potent argument within a community traumatized by jihadist terrorism. In 2015 she promised to be “the shield” for Jews against Islamists but asked Jews to “make a sacrifice” in the fight, including giving up ritual slaughter and the right to wear religious symbols.

Even CRIF, the federation of Jewish communities of France, appeared to soften its opposition to Le Pen. In 2015, its then president, Roger Cukierman, said she  “cannot be faulted personally” for anti-Semitism. Although he later added that National Front will continue to be shunned by CRIF, his comments earned widespread criticism from prominent Jewish groups and individuals who consider Le Pen irredeemable.