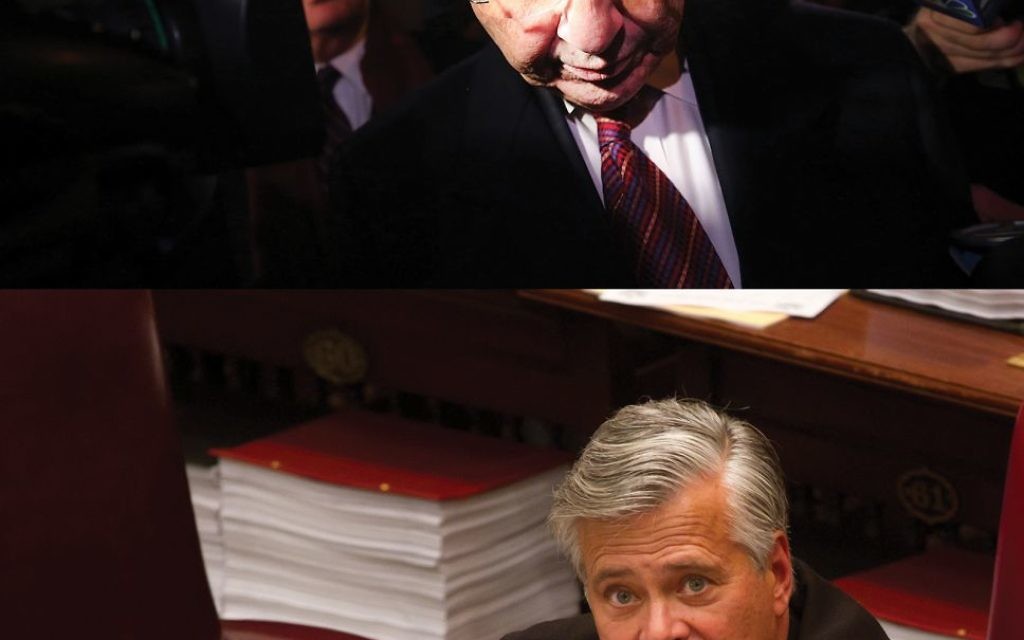 With the corruption conviction last week of former Democratic Assembly Speaker Sheldon Silver, who represented the Lower East Side, and the corruption trial of former Senate Majority Leader Dean Skelos (R-L.I.) coming to an end, the impact of these high-profile cases on the Jewish community is being weighed.

“What we are afraid of is losing our poverty and social service programs,” said Neil “Nechemia Shimon” Rothenberg, a Lower East Side real estate developer and philanthropist. “These are for both the community at large and the Jewish community specifically, and Shelly lobbied Albany to fund them.”

What makes Rothenberg’s comments especially significant is that the Jewish community has seen a spike in recent years in the number of families living at or near poverty.

Skelos, who is on trial with his son, Adam, for allegedly using his position to enrich his son, is well thought of in the Orthodox community in the Five Towns of Long Island for his strong support of yeshivas, according to Michael Fragin, a Republican political consultant.

“In New York, the Senate and the Republicans are more friendly to the yeshiva agenda,” he continued. “I’m not sure a conviction would change that, but it could be a problem if the Democrats take over the Senate.”

Should he be convicted, Skelos, like Silver, would automatically be stripped of his elected office. It is assumed that Skelos’ seat, like that of Silver, would be filled in a special election April 19, the day of the presidential primary in New York State.

Skelos stepped down as Senate majority leader in May, days after his indictment, and John Flanagan (R-Smithtown) was elected to replace him as majority leader. Flanagan had served as chairman of the Senate Standing Committee on Education, and, Fragin said, he, too, had been “a real friend to the non-public school community.”

Regarding Silver’s loss as the assemblyman of the Lower East Side, Fragin said that the community “will definitely see a marked decline in resources.” He added that the community, which has undergone decades of demographic change and has sizeable numbers of Chinese and Latino residents, is “unlikely” to elect another Orthodox Jew.

“It is the end of an era as far as New York Jewish politics is concerned — particularly on the liberal side,” said Fragin.

“Silver was the most identifiable Orthodox Jewish politician in the country, although he did not wear it on his sleeve like some of the up-and-coming politicians,” he added, referring to such pols as New York City Councilman David Greenfield and Assemblymen Phil Goldfeder and Michael Simanowitz who regularly wear kipas in public.

A list detailing member items that politicians allocated to pet causes from the fiscal year 2009-2010 — the last year before then-Gov. David Paterson ended the practice of allowing pols to allocate grants to pet causes — shows Silver doling out hundreds of thousands of dollars to Jewish organizations. (He also gave plenty to non-Jewish causes.) According to the organization SeeThroughNY, the United Jewish Council of the East Side got $424,000; the Lower East Side Tenement Museum received $77,000 and $50,000 was allocated to the Center for Jewish History. Haazinu for Hearing Impaired Children got $48,000, the Eldridge Street Project got $44,000, as did Borough Park-based Nachas Health and Family Network.

And this doesn’t factor in the influence the assembly speaker had on which social service providers were awarded contracts from state agencies — not to mention how much money those agencies had to allocate.

Silver’s conviction comes 17 months after the corruption conviction of his former protégé, William Rapfogel, who headed the influential Metropolitan Council on Jewish Poverty. Rapfogel, who was recently moved from prison to a halfway house after serving two years, was convicted of running a $9 million insurance-overpayment kickback scheme that reportedly netted him millions in cash.

Another observer, who asked to remain anonymous, said Silver’s political clout ended at the beginning of the year when his indictment compelled him to step aside as speaker after 21 years.

But Rothenberg, who said he has known Silver all of his life, said Silver never stopped taking care of his constituents.

“The Orthodox community there reads the paper differently than the average person,” he said. “We don’t see him [Silver] as a politician but as someone who is our friend and who is completely committed to the community. He never ran for higher office because he wanted to represent us. The simple people here knew that if they were in need of anything in the world, they had access to one of the most powerful people in New York. Shelly delivered for everyone in the community and the community sees him as innocent.

“This is not a stupid community,” he continued. “It is an educated community and we see him as a scapegoat. He was a very convenient target of people who say they want to ‘clean up Albany.’ … He earned a salary from a law firm he was working for, for 10 years. The articles make it seem like he got $4 million in bribes. He was paid a salary and paid taxes on it and now they are saying it was not legal.”

During the trial, the office of Manhattan U.S. Attorney Preet Bharara presented evidence to show that Silver traded political favors to enrich himself. It was shown that he steered state money to a doctor who reciprocated by sending patients to Silver’s law firm, and that Silver supported legislation that helped a real estate firm that hired a law firm he also worked for. His defense insisted that because working for the state legislature is a part-time job, lawmakers are allowed to have outside jobs and that Silver did not act differently than his colleagues.

Bharara has indicated that he will seek to go after some of the $4 million he contends are the fruits of Silver’s criminal conduct.

Observers note that even should Skelos be acquitted, he has already lost his powerful leadership seat. A conviction would mean his seat would go to “someone who is not of the same stature or as seasoned a politician,” pointed out Arthur Katz, immediate past president of the Jewish Community Relations Council-Long Island. “So we will have lost an advocate of the Jewish community who had a high level position in the state legislature.”

In addition, he said, whenever an elected representative is replaced because of illness, retirement or scandal, he or she will be replaced by a freshman.

“More senior senators will have more of an ability to leverage funds than a freshman,” Katz pointed out.

Among the names mentioned are Hempstead Town Councilman Bruce Blakeman (a Republican who has served as a presiding officer of the Nassau County Legislature and a commissioner for the Port Authority of New York and New Jersey), Assemblyman Todd Kaminsky (D-Long Beach) and Nassau Legislator Howard Kopel (R-Lawrence).

Reflecting on Silver’s conviction, Ester Fuchs, a professor of public affairs and political science at Columbia University, said that when a man of his “stature is convicted of this kind of political corruption, it is a tragedy for the entire city.”

“What it reveals to me is that there is a structural problem in state politics in New York,” she said. “His conviction is part of a larger problem of pay-to-play in Albany. We need to empower our elected officials to fix this. There must be systemic reform so that there are no gray areas — so that there are no politicians who think it is OK to connect kickbacks or campaign contributions to the legislative process.”

Fuchs added: “It is a hundred-year-old problem that goes back to the old-style machine politics of Tammany Hall. This is no longer about Sheldon Silver. He has been convicted. It’s over. And it’s not about Jews. We shouldn’t be looking at it in that kind of parochial way. … Nobody believes this kind of behavior is ethical; now Preet has made it clear that it is not legal either. That is why the laws must be changed to make sure that everybody in Albany understands the implications of this conviction.”