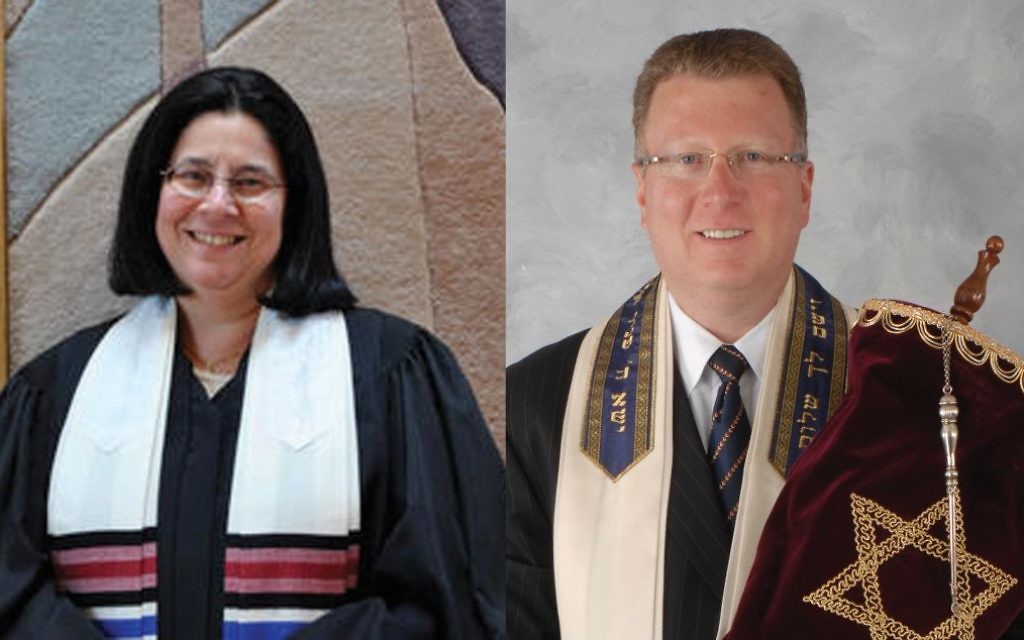 Since opening its doors two years ago, Temple Shalom of Woodbury, L.I., has held Hebrew school classes in its part-time rabbi’s law offices in Plainview. Membership dues are a bargain basement $360; there is no building fund.

Meanwhile, another relatively new congregation, West Hills Torah Center in Huntington, L.I., has held Hebrew school and services in the garage of a converted private home for the past four years and has neither membership dues nor a building fund.

And Miyad, a Chabad synagogue and school in Syosset offers a once-a-week Hebrew school for $770 a year and free High Holy Day tickets.

In response to the onslaught of low-cost alternatives, established congregations are scrambling to compete, trimming tuition, dues and building funds.

Welcome to the synagogue wars of central Long Island.

Synagogue membership in much of Long Island — and throughout the United States — is on the decline, spurring many congregations to close or merge. In this climate, competition for the souls – and dollars – of Jews can be intense, with established institutions viewing startups as highly threatening.

“They [low-cost synagogues] are undermining the rest of the Jewish community,” asserted Rabbi Jonathan Hecht, spiritual leader of Temple Chaverim, a Reform congregation in Plainview that has not cut its fees despite the pressure.

Unlike Temple Chaverim, the Manetto Hill Jewish Center, an established Conservative congregation in Plainview, has cut fees: offering free two-day-a-week Hebrew school beginning next month for all those who pay the regular $1,925 membership dues and eliminating its building fund fees.

Meanwhile, another established Conservative congregation, the nearby Jericho Jewish Center, has cut its religious school from two days to one day a week beginning next month, made it free and is also eliminating membership dues and building-fund fees for all new members.

And the synagogue wars have gradually spread east into Suffolk County, where Commack’s Suffolk Y JCC is now ground zero in one increasingly bitter battle.

That conflict pits the Suffolk Y against its next-door neighbor, Temple Beth David, a Reform congregation that has long been allowed, free of charge, to use the Y’s parking lot for overflow parking on the High Holy Days.

But next month, the Suffolk Y has agreed to rent its 600-seat auditorium to Temple Shalom, which decided to move from Woodbury in Nassau County to Commack in Suffolk because it needed more space for High Holy Day services.

Long Island is hardly the only place where synagogue dues and fees are in flux. As a report published earlier this year by UJA-Federation of New York’s congregational arm notes, both the recession and shifting generational attitudes toward institutional membership and affiliation are causing synagogues to struggle with established funding and membership models.

While synagogues serve an important role in society, “the current American zeitgeist seems to hold an antipathy toward membership, especially when a financial cost is attached,” the “Connected Congregations Report” of the federation’s SYNERGY program observes.

That report emphasizes that synagogues cannot solve their membership attrition solely by altering dues or fees: “Membership, dues and engagement work together; a dues change cannot succeed without working on the engagement of congregants in Jewish life.”

In Suffolk, startup Temple Shalom’s spiritual leader, Rabbi Alan Stein, explained that his congregation is growing — from 175 families last year to an anticipated 200 — and that the Syosset country club it rented last year is too small.

But rabbis and leaders of established synagogues are outraged that their Y is helping a low-cost competitor. Some congregants have already announced they will withhold their donations to UJA-Federation of New York, which helps fund the Y.

Rabbis and communal leaders met late last month to discuss what one rabbi said was the first time a Jewish communal organization was “aiding and abetting” these low-cost operations.

“We met to express our dismay that the Y opened its doors to them,” said Rabbi Beth Klafter, Temple Beth David’s new rabbi.

Temple Shalom, which throughout the rest of the year rents the 100-seat Historical Chapel in nearby Woodbury for its weekly Friday night service, bills itself as “Reform but traditional in nature.” Unlike Temple Beth David, it is not a member of the Union for Reform Judaism, the umbrella organization of Reform synagogues in North America.

A big part of what makes Temple Shalom attractive is what Rabbi Stein calls his “pay-as-you-go platform.”

“It’s the Chabad model that we are applying to Reform Judaism,” he said. “For a $360 membership our clergy are at your disposal. High Holy Day tickets are $118 per adult; children under 13 are free. Bar and bat mitzvah lessons are $1,000 for six months, Hebrew school costs $925.”

Rabbi Klafter said it is “clear that [Rabbi Stein’s] methods are to get our members to leave, and that’s not ethical. Their approach on their website and in their printed ads is clearly aimed at stealing members from established congregations, and the rest of the rabbinic family is not happy with them.”

Rabbi Steven Moss, president of the Suffolk Board of Rabbis, said that about 25 years ago there had been an unwritten agreement between the Suffolk Y and area congregations that the Y “would remain as a cultural education center but not involve itself in a religious or spiritual way because to do so could affect the stability of synagogues in the area.”

He said he spoke with the Suffolk Y’s new executive director, Adam Bendeson, and was told that the Y is not sponsoring Temple Shalom, only renting its auditorium to it.

A spokeswoman for the Y had no immediate comment.

“Regardless what happens in the immediate situation, I would like to sit down with the board of the Y and develop rules to follow in regard to these kind of rentals,” Rabbi Moss said.

A lot of the consternation being expressed by established synagogues, he added, “reflects the difficult times congregations on Long Island are going through. All of us are concerned about [the rate of] affiliation and what the future will bring.”

Robin Givre of Melville, L.I., is a mother of three whose family had belonged to two established synagogues for a total of 17 years before switching to a low-cost synagogue three years ago. She said they started in a Conservative synagogue and switched to a Reform congregation because the Conservative synagogue failed to move her younger daughter, Erika, to a different preschool class after a problem arose.

But she said she and her husband, who were raised in Conservative synagogues, felt uncomfortable in the Reform congregation.

“There were a lot of mixed marriages, my daughters were learning by rote and were miserable,” Givre said. “Alyson did not want a bat mitzvah and dropped out. I called the principal and never got a call back.”

“I found out about West Hills Torah Center when I passed by it one day,” she continued. “We joined. Erika was resistant at first but I said go one day. She did and loved the rabbi. She said she felt accepted and warm, and it was so personal.”

Givre said she told the Reform synagogue she was leaving and “they didn’t care — I don’t think they even knew we were gone. We’re in our third year [at West Hills] now. My son loves it and is learning how to read Hebrew and things he would have never learned there. … Alyson has gone to services there, and we have been to dinner at the rabbi’s house.”

She noted that West Hills’ rabbi, Yitschak Hassine, worked individually with Erika “and got her up to par to be bat mitzvah and to read Hebrew — which was not happening at the other temples. I’m happy there and people are flocking to him because he has a good reputation. My son’s entire preschool [from the Reform congregation] all moved there.”

Givre added that Hebrew school tuition is $900, there are fewer than 20 students per class, and that there is no building fund, no membership fee and no charge for High Holy Day tickets. She said she gives the congregation a yearly donation.

“For me it’s not about the money,” she stressed. “I just want my kids to know about Judaism.”

Rabbi Hecht said that in response to the bargain-rate synagogues, some established congregations that are “dropping religious school fees are doing so as an act of desperation before they close their doors; nothing is free.”

He said the startup synagogues are “desperate for members” and that their actions are “siphoning off members” from synagogues that have not joined the synagogue wars.

“We simply cannot offer a quality Jewish education for free,” Rabbi Hecht added. “We have teachers and building resources — it all costs money. … They are hurting the organized Jewish community.

“The pressure is on for us to cut costs by cutting the amount of hours that our children are in the religious school to meet the same level that the bar mitzvah tutors are giving kids. But that would be a descent into nothingness.”

Asked about the charge that he is “undermining” established synagogues, Rabbi Stein replied: “We are meeting the needs of the modern Jewish family. It is our expectation that after the youngest child has become bar or bat mitzvah that most of our families will remain members because of the modest pricing of our synagogue. For a price of $360, plus the cost of High Holy Day tickets, I believe we are going to accomplish our goal.”

He acknowledged that “local congregations were not pleased” when he opened two years ago.

But he said he attracted many unaffiliated Jews and some who were members of “more expensive synagogues and were unable to afford the cost.”

“The recent trend has been that families can’t afford membership and the building fund and Hebrew school, and they say they are just going to get their child tutored,” Rabbi Stein said. “We are an alternative to that because we are half the price of a traditional congregation.”

He pointed out that “many families would rather take the $3,000 it costs to be a member of a typical Reform congregation in the area and spend it on a cruise after their children are bar and bat mitzvah. I’m seeking to make sure that congregants stay affiliated with a synagogue on a long-term basis and that it should be affordable.”

Rabbi Stein said his congregation did not affiliate with the Union for Reform Judaism because “the primary support the Union affords a congregation is clergy — and we have clergy; the clergy formed the congregation.”

Rabbi’s Stein’s father, Stephen Stein, serves as the congregation’s cantor. He formerly served as the cantor of the Huntington Jewish Center and Temple Beth Torah in Melville.

This series is made possible by a grant from The Jewish Week Investigative Journalism Fund.