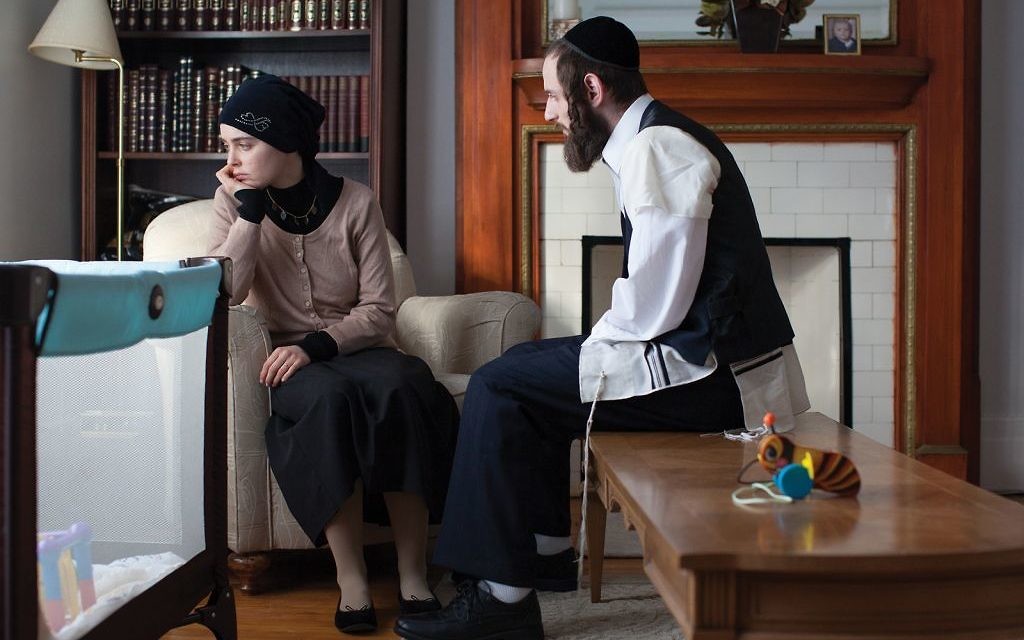 We live in an age of bombast, pointless excess and noise. If you don’t find enough of those elements in the political culture, check out your local multiplex. One result of the rule of cacophony in 21st-century America is that quiet, contemplative work frequently gets lost, overwhelmed in the marketplace by flash.

Faced with a film like Maxime Giroux’s “Felix and Meira,” which opens Friday, April 17, it is tempting to overplay its virtues in the hope that it won’t disappear without a trace, drowned in the welter of superhero movies and gross-out comedies. The Canadian film set in Montreal is Giroux’s third feature, and his first to be released here. The film was chosen as the best Canadian feature at last fall’s Toronto International Film Festival, and was the closing night film at this year’s New York Jewish Film Festival. It offers some very real, if occasionally modest, virtues, and its low-key intelligence makes it well worth seeing.

Felix (Martin Dubreuil) is a secular Jew — although at one point in the film he says, only half-jokingly, “I don’t know what I am” — who has lost his father from whom he has been estranged for a decade. Meira (Hadas Yaron, the lead in “Fill the Void”) is a married chasidic Jew with an infant daughter and a yearning for something beyond the routines imposed by her community.

They meet by chance and gradually become involved in a surprisingly chaste relationship, but one that merely aggravates Meira’s sense of dissatisfaction with her life and her husband Shulem (Luzer Twersky).

The potential for melodrama presented by this situation is obvious, but Giroux is after something subtler, more elusive. From the film’s opening through its final shot he invariably makes visual choices that create a certain distance from his protagonists. Meira and Shulem are seen in Vermeer-like cool morning light, in shots almost painterly in their compositions, keeping the characters just a little farther from the camera than might seem necessary. Felix is usually first seen from the back, emphasizing his seeming inscrutability, underlining his emotional opacity. Voices are almost never raised. Violence only bursts out once, although with shocking suddenness and an almost comic ineffectuality; a long deliberately undercuts the force of the act.

Given this approach to the material, Giroux understandably relies on long takes, allowing the emotional currents of a scene to build slowly. It is a choice that pays lovely dividends in the touchingly awkward moments of intimacy between the title characters. But it serves a second purpose as well, particularly towards the end of the film, when everyone’s choices become irrevocable and even dangerous; in the last third of the film, Giroux’s refusal to cut within a scene gives the interactions of the people on-screen a claustrophobic intensity that belies the seeming restraint of their outward behavior. It is with just such a long take that Giroux ends the film, with a devastating revelation that is made all the more startling because he throws it off so casually.

“Felix and Meira” is an impressive work, but hardly flawless. The film’s middle section seems a bit aimless; a scene between Felix and Shulem relies too much on a rather obvious plot development that is heavy-handed in its irony. But the acting is exceptional, Sara Mishara’s cinematography is quite beautiful, and the end result is a film whose gentleness and concentration raise it above the run of the mill. Giroux pulls off the rare feat these days of making us see a world in which there are no “bad guys,” and all suffer for their choices.

“Felix and Meira” opens Friday, April 17 at the Lincoln Plaza Cinema (Broadway and 62nd Street). For information, call (212) 757-0359 or go to www.lincolnplazacinema.com.