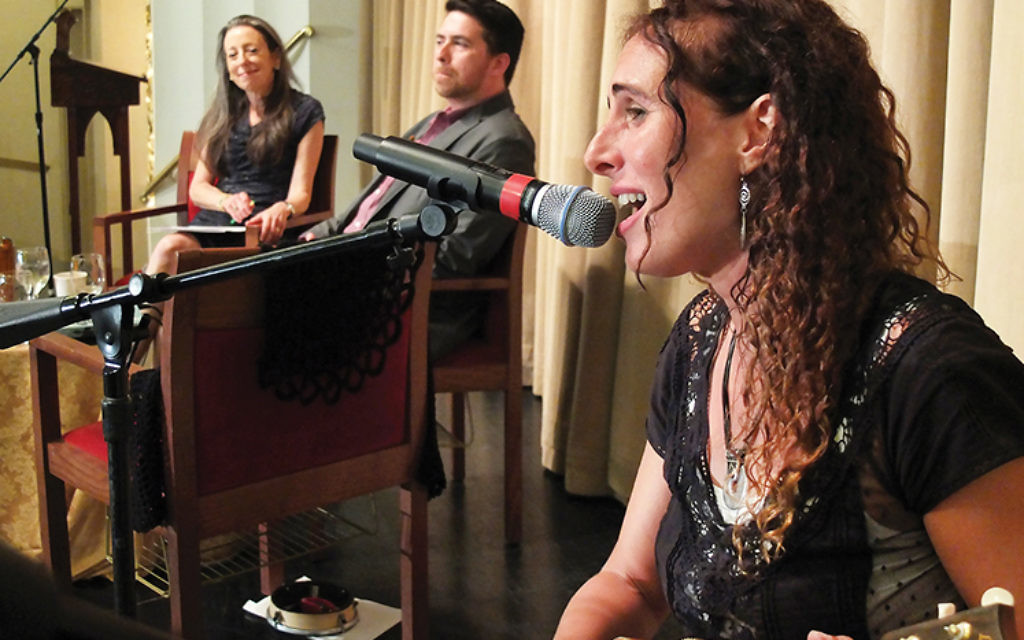 In the 1991 alt-rock anthem from the Athens, Ga.-based band REM, the group sings, “That’s me in the spotlight / Losing my religion / Trying to keep up with you / And I don’t know if I can do it.”

Last week at a Jewish Week-sponsored literary forum, the man in the spotlight losing his religion was Shulem Deen, author of the well-received memoir about leaving the Orthodox fold, “All Who Go Do Not Return” (Graywolf Press). After years of trying to keep up with the religious and societal strictures placed upon him by his strict Skverer chasdic sect in upstate New Square, Deen made a break.

So did Basya Schechter, who shared the stage with Deen last Tuesday night before a crowd of about 600 at Congregation Rodeph Sholom on the Upper West Side. (Jewish Week culture editor Sandee Brawarsky moderated.) The vocalist, who leads the klez/world music band Pharaoh’s Daughter and is musical director at the Renewal congregation Romemu, left her insular “yeshivish” neighborhood of Borough Park years ago. But perhaps she hasn’t left her religion behind in quite the same way Deen has.

In a telling exchange, Deen, 40, explained that in giving up the certainty of the chasidic world (which included his wife of 15 years and his five children), he came to embrace the “uncertainty” that defines the modern condition for most people. But there was nothing “religious” in the place where he landed, he said, despite his gaining all kinds of insights about the world and his new place in it.

Schechter saw the glass half full, so to speak. She, too, unmoored from her cloistered upbringing, is grappling with uncertainty. But she saw a religious dimension to it — a spiritual seeking for answers and truths that would likely lie beyond her reach. Religion, she seemed to be saying, was in the searching.

The discussion touched on serious matters of faith, adjustment (Schechter choked up when she talked about how difficult it was to leave the fold and rebuild her life), and the lack of sufficient services for those who choose to leave the Orthodox lifestyle.

But there was humor, too (Deen and a friend, who hardly knew what baseball was, cruising Rockland County for a place to watch Game Seven of the 2001 World Series — “two chasids walk into a bar…,” Deen quipped.)

Deen read a pivotal passage from “All Who Go,” which was both a sharp critique of the charedi lifestyle and a revelatory moment when he realized his old religious foundation — roof, floorboards, all of it — had crumbled. Schechter read a funny essay she wrote for the occasion describing another kind of revelation: when, in seventh-grade organic chemistry class, she realized she was a swirling particle of energy at a far remove from, yet somehow still connected to, the workings of the nucleus; it was a metaphor for her life.

And there was music, a balm in the literary Gilead. Schechter sang a satirical ditty about the pre-Yom Kippur ritual of kappores (“finger lickin’” chicken), and a moving devotional song sung on the Sabbath.

In the end, both Deen and Schechter left the religious practice of their childhood behind, but in hard-won ways they found their voices in art — Schechter in music, Deen in prose. They lost plenty. But what they gained, as if they were sitting at the right hand of God, was a measure of creation.