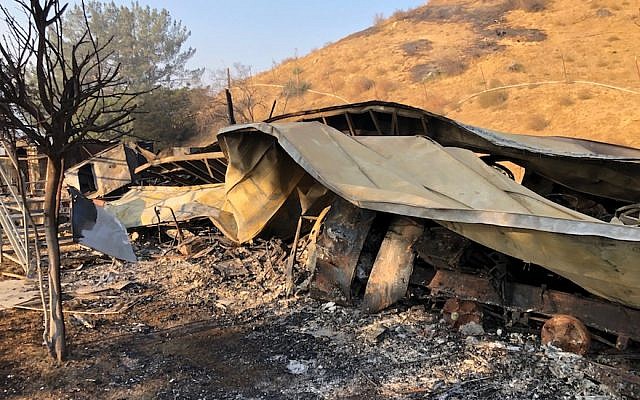 A view of the Ilan Ramon Day School in Agoura, Calif., after the fire. (Courtesy of Yuri Hronsky)

LOS ANGELES (JTA) — The Woolsey Fire, which began late last week and engulfed a massive swath of Southern California, has killed at least two people, burned nearly 100,000 acres and ravaged hundreds of structures — including several touchstones of Jewish life in this city.

Three historic Jewish sleepaway camps and a Jewish retreat center, all nestled in the Malibu hills, were consumed. A Jewish community day school lost three of its buildings, and several synagogues have smoke damage. Many families, including that of the new rabbi at Malibu Jewish Community & Synagogue, lost homes and nearly all their belongings.

Here are some stories about what was lost and what remains.

‘Where I forged my path as a Jewish person’

Tens of thousands of Jewish youth, spanning three generations, have spent summers at Camp Hess Kramer and its smaller sister camp, Gindling Hilltop. By late Saturday, with the Malibu hills near the campgrounds aflame, more than 200 current and former campers, together with their families, gathered for an impromptu Havdalah service to mark the end of the Sabbath.

“Even though we didn’t know the extent of the damage, we knew we had been affected — and we knew the community was in need of some healing,” said Ari Kaplan, the assistant director of the camps, both of which are affiliated with the Reform Wilshire Boulevard Temple. 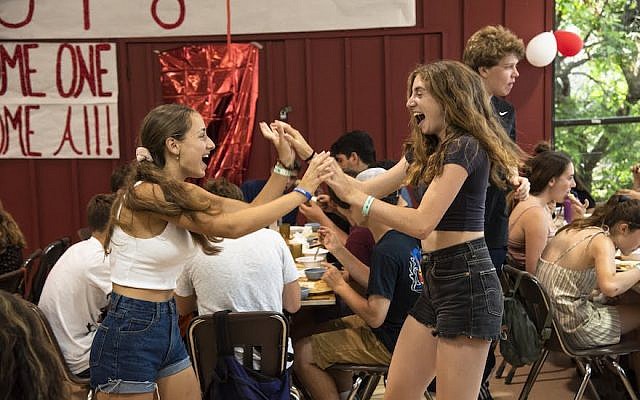 At the service, held at the Temple’s West Los Angeles campus and watched via live stream by some 13,000 people, “it was mostly singing, people holding each other — we passed around a box of tissues,” Kaplan said. “People wanted to share what camp meant to them.”

In the days since, the extent of the damage has become clear: It’s catastrophic. The fire burned roughly 90 percent of the campgrounds, destroying all but two cabins there, Kaplan said. Rebuilding is likely to be a years-long process, but the camp is already scouting temporary locations for next summer.

So, too, is the Shalom Institute, a popular Jewish retreat center and home to the 67-year-old JCA Shalom summer camp. The grounds were all but razed in the fire.

“We’re moving fast, and hope to make some announcement [about a venue] before Thanksgiving,” said Rabbi Bill Kaplan, the institute’s executive director. “It’s heartbreaking, but we’re camp people — that’s what we do.”

In the meantime, the institute has set up shop in office space provided by the Jewish Federation of Greater Los Angeles. The federation has been hosting daily calls with affected Jewish organizations and arranging support services from trauma counseling to legal assistance.

Michelle Rosenbloom-Quirsfeld, who attended Hess Kramer in the 1980s and later became a counselor there, said the destruction of the Malibu campgrounds is devastating. 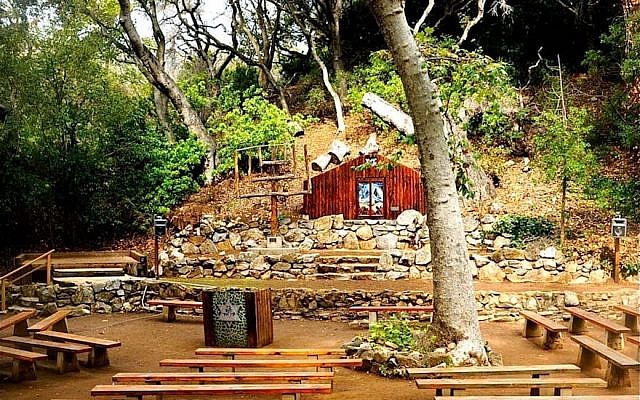 It’s a major loss, she said, noting Hess Kramer was where she first learned to sing and pray as a Jew, “to respect Shabbat,” and to do traditional Israeli folk dances.

“It’s not a loss of life, but it’s a loss of part of my identity,” said Rosenbloom-Quirsfeld, now 46 and a schoolteacher in Northern California. “It’s where I forged my path as a Jewish person.”

Yuri Hronsky was watching the local news on Friday when cameras panned to fires burning at the Ilan Ramon Day School in Agoura Hills.

“It’s as powerless as you can feel,” Hronsky, who has led the Jewish community day school since 2010, said of seeing the campus in flames.

Hronsky and the school’s board members surveyed the damage on Tuesday. Three buildings at Ilan Ramon — housing administrative offices, a computer lab and bathrooms — were destroyed. The classrooms remain intact, but most of their contents will have to be purged due to smoke.

“There was immense sadness,” he said, “and immense gratitude.”

Sadness for the school community, whose members would have to endure destruction and displacement. Sadness for what had been lost, including memorabilia from Hronsky’s 18 years at the school. And gratitude for the firefighters who kept the flames from engulfing the whole campus. Even the class pets — rabbits, birds and turtles — survived the ordeal.

Nate Akiva, a board member, said Ilan Ramon — a school formerly known as Heschel West, and since renamed after the late Israeli astronaut — is “like a kibbutz,” small and tight-knit, a place where everyone feels like they have a stake in one another’s well-being. When some school families were forced to evacuate, others took them in.

Akiva said he was relieved that the damage wasn’t more extensive and confident that the school would rebuild what was lost. His daughter, a first-grader at the school, has needed more reassurance.

Where they will go now is not yet clear, though Ilan Ramon has fielded multiple offers from synagogues and other schools offering space while its campus is being cleaned and rebuilt. To that end, the school launched a GoFundMe campaign and is selling “IRDS Strong” T-shirts to help offset any out-of-pocket costs associated with getting the campus up and running.

Hronsky said the school is hoping to reopen in a temporary location as soon as Friday, “so we can spend Shabbat together.” 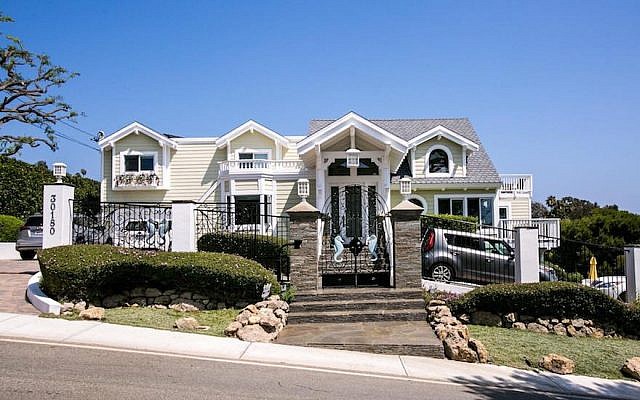 ‘Everyone is so aware of what’s important’

The Lodmer family seders are like no other. For one, there is always a theme — “Star Wars” one Passover, “Harry Potter” another. “Jeopardy!” The “Wizard of Oz.” “Name That Tune.” The dinner guests wear costumes, read from bespoke Haggadahs that weave together the evening’s more contemporary theme with that of the age-old story of the Jewish Exodus.

These epic seders would take place, year after year, at the home of Emily and Sheldon Lodmer. The couple put down roots in the seaside city of Malibu, California, more than four decades ago, when property there was still relatively affordable. It’s where they raised their children, Abby and Zack, and welcomed grandchildren. It’s where family and friends and friends of friends gathered for holidays.

Last weekend, the house burned to the ground.

“I keep finding myself thinking about the little things,” Zack Lodmer, 38, who works at the Los Angeles Jewish federation and founded Om Shalom, which offers Jewish yoga programming. “Parking in the driveway, the way the grass felt on my feet, the way the sunlight hit the mirrors, the way the books were positioned on the shelf — the general hum of energetic family life.”

When the roads reopen, the family plans to travel together to what’s left of their home.

The Lodmers are among at least 13 families at the Malibu Jewish Center & Synagogue whose homes were destroyed. Rabbi Michael Schwartz has been tending to his congregants there — even as his own house went up in flames. On his way out of the burning town, Schwartz, who has led the synagogue since February, packed the congregation’s five Torahs into his Toyota Camry. The fire came within 20 feet of the synagogue came within 20 feet of the synagogue, but the building was not consumed.

“One member said to me, ‘Now we really get what Sukkot’ is about — to experience the reality that everything is fragile and transient, that we have to be grateful and count our blessings,” recalled Schwartz, referencing the harvest holiday when Jews build temporary outdoor shelters. “Everyone is so aware of what’s important.”