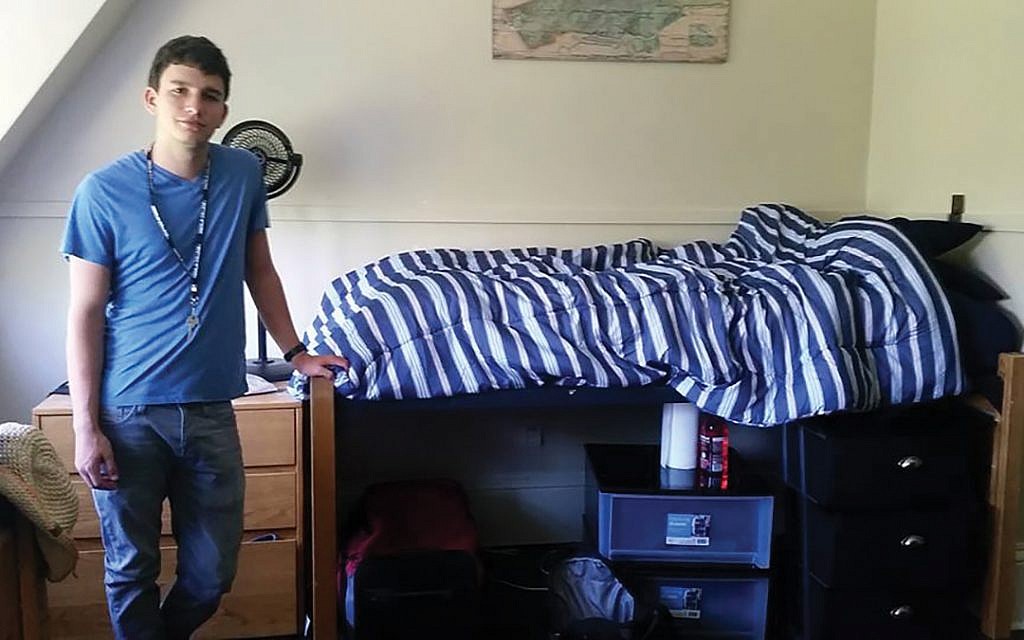 The author in his dorm room on his first day at Oberlin. photos courtesy of Rami Teeter

Loving Judaism may be about finding the right Jewish space —spiritually and communally — at the right time. And if you’re not there yet, life can be tough.

For me, growing up Modern Orthodox in Long Island, I wasn’t there yet during high school. By senior year, I felt like I had done my time in the Jewish day school system for almost 15 years. I had averted my gaze from the temptations of Domino’s Pizza and McDonald’s. I had arrived at school in the mornings far earlier than could reasonably be expected of any teenager for davening, putting on tefillin and mumbling unfelt prayers as my eyes froze over with sleep. I kept Shabbos, I kept kosher — and I kept asking the same question: What am I doing here?

By the time high school was over, I was ready to skip town. I think I’m the first person from my high school to attend Oberlin College, known for its progressive liberalism, and few students attend from any Orthodox day school. Oberlin is a good nine-hour drive from Long Island, and as my mom and I drove up to school at the start of my first year, I was grateful for each of the 500 miles separating me from the first 18 years of my life.

But the start of my college life did a much better job of raising new questions than putting to bed the old ones. Questions like: Without Judaism at its center, what is my life supposed to look like? Or, if all I wanted to do in high school was distance myself from the Jewish community, why have I found myself joining what seems like every Jewish club on campus? Or even: Why do I miss my old Jewish community so much? 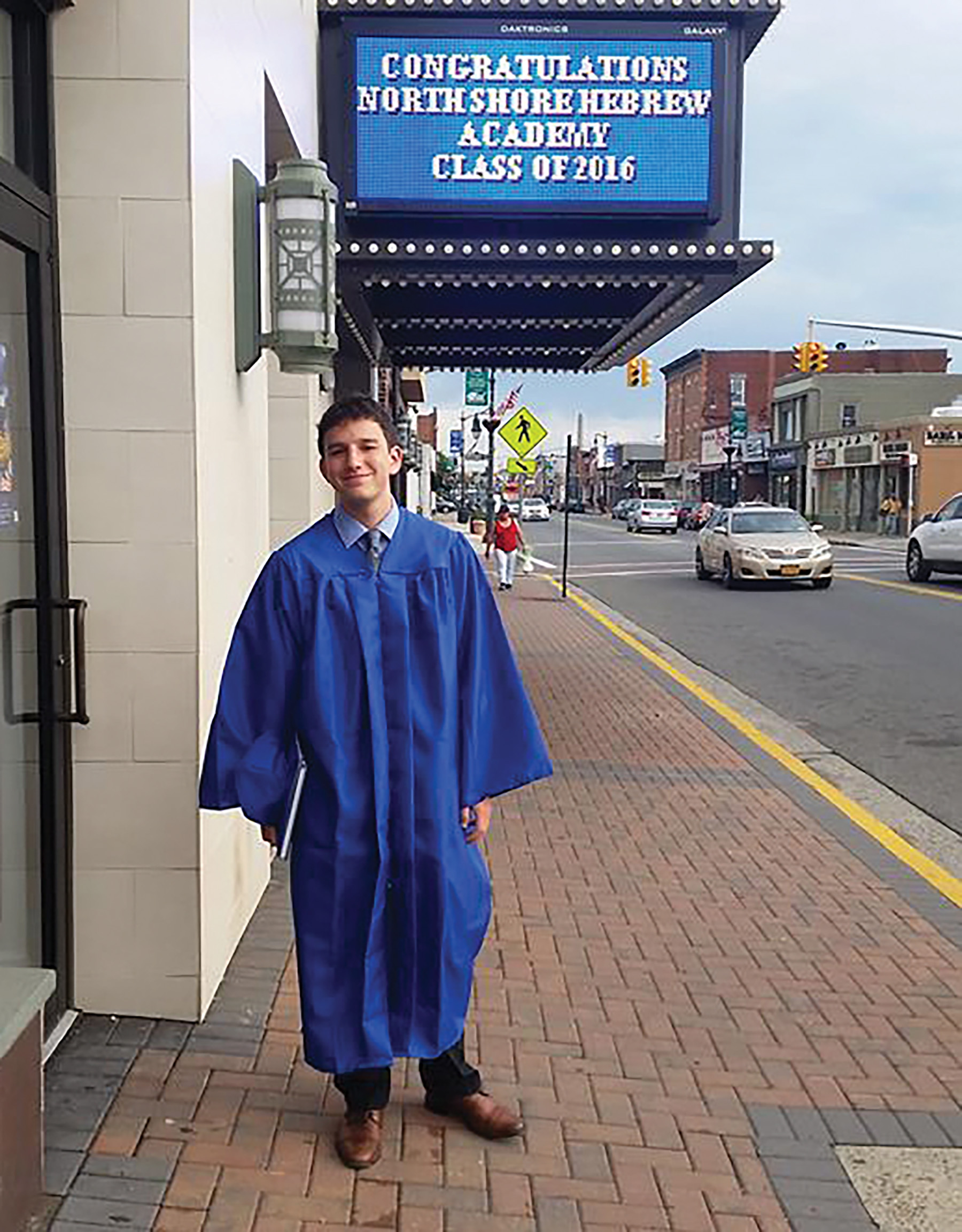 The author at his high school graduation.

Now in my third year at Oberlin, I find myself in a very strange kind of middle ground. Over the past three years, I’ve slowly begun to pick up the pieces of the observance I thought I’d left behind for good. I’m probably far more religious now than I ever was before, doing all kinds of things — davening, putting on tefillin, keeping Shabbat — that once seemed absurd to me. It took being here, a college not exactly known for its religious student body, to realize that it wasn’t Judaism itself that I had been so repelled by.

It was only once I had the ability to choose how I wanted religion to play a part in my life, instead of it just being a given, that I realized that I actually wanted it there. I was able to define how Judaism would play a role in my life. Being in a non-religious — even anti-religious — space forced me to grapple with whether Judaism was important to me, which in turn made me see, for the very first time in my life, Judaism’s importance. In going from a deeply observant environment to a totally secular one, I was able to see my religion from a perspective that I had never before had access to.

That doesn’t mean that my old Orthodox community and I are suddenly a perfect fit. Indeed, that’s where the middle ground comes in; these days, I’ll often find that I’m the most religious person in a secular environment, but the most secular in a religious one — which, of course, means that I’m not truly comfortable in either.

For the moment, that’s where this story ends. The reason why I tell it here isn’t that I think it’s particularly unique. To the contrary, I think the broad strokes of it apply to a growing, largely unseen number of young people in the Jewish world. For these people, the idea of living in a non-Orthodox community is unthinkable, and yet living in an Orthodox community often means making compromises on many of their core convictions and inspires serious unease. This discomfort with Orthodoxy can spring from many different sources, be they political, religious, cultural, or, as is often the case, some mixture of the three. But discomfort doesn’t mean rejection. If anything, it shows that Orthodoxy, despite its flaws, isn’t something many of us are willing to truly walk away from.

Of course, I say this is a growing “movement,” but there is no statistical way to know that. Instead, that observation is based on the fact that I know these people — and if you’re Orthodox, you probably do, too, though you might not realize it. Their stories are all different, but they all hit similar notes. Stories like: a friend of mine who loves religion and Judaism so much so that she would love nothing more than to be a rabbi, if only such a thing were possible within the norms of Modern Orthodoxy. She told me that her practice of a religion with so much gender separation makes her “feel like I’m participating in my own oppression.” Or a friend of a friend whose dream to be the wife of a rabbi was complicated somewhat by the realization that she is gay. Or a student I know at Oberlin who struggles every High Holiday season, because “I could never go back to the kind of Orthodox services that I grew up with — but whenever I go to non-Orthodox minyan, it just doesn’t feel right. I don’t know where I’ll ever be comfortable.” Or another friend, who told me, “What I struggle with is the way the Orthodox community has accepted social bias that got folded into our tradition.” She said she felt that her voice “is not valued [as a woman] and I don’t have the opportunities to be a leader and a learner the way I want to be.”

Like I said, Judaism is about finding the right space at the right time, and for most, trial and error is all it takes. But what of the people who think they’ve found the right space for them Jewishly and communally, and yet still don’t fit in? As of now, I don’t know where I’ll end up, or if there’s a Jewish space that I can exist in without compromise. But what I do know is that I’m not the only one knocking on the door of the Orthodox community, asking for room. Whether the door is opened remains to be seen, but I’ll keep knocking for a while yet.

Rami Teeter is a junior at Oberlin College.

This piece is part of “The View From Campus” column written by students on campus. If you would like to contribute to it, email lily@jewishweek.org for more info.