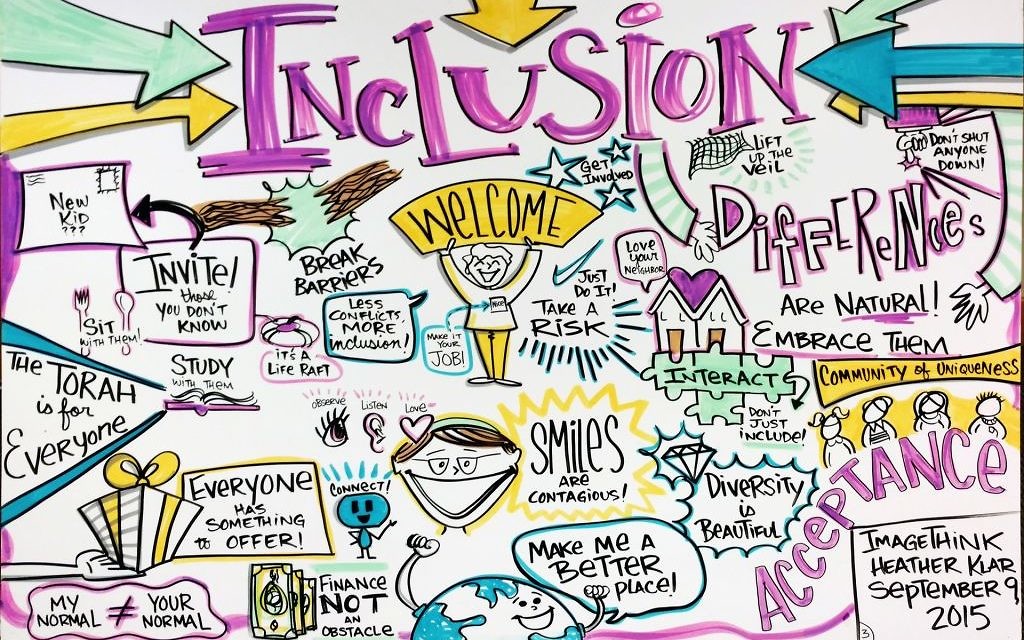 Inclusion is a mindset. Inclusion means always thinking about who might be feeling “on the outside” and bringing them to “the inside” for meaningful engagement, contribution and belonging. I believe this definition is consistent with the Torah’s direct and indirect inclusion messages.

A favorite Torah verse used to demonstrate inclusion is from the creation story: Btzelem Elohim, that we are all created in the image of God. Bruce Wexler, the president of my synagogue, Temple Israel Center, wrote beautifully:

"If we are all created in God’s image, then we each have an obligation to treat one another with respect and dignity. There is no better way to satisfy that obligation than to create an inclusive community, one in which each and every person can fully participate and share in all the incredible gifts that your community has to give."

Jesse Saperstein, diagnosed with Asperger’s Syndrome, is a motivational speaker, autism activist and author of several books. Saperstein proposes that the word disability be written:

Additionally, he proposes that the word disability should be spoken: (quietly) dis (loudly) ABILITY. With his grammatical changes, we are forced to see the ABILITY in people not just the “dis.” All too often, we get this mixed up.

This is the message of inclusion in the Torah. The Torah provides examples of people’s foibles, but keeps focus on a person’s abilities.

For example, with all the fertility problems of our ancestors, it is amazing that Jews ever reproduced enough to become a sustainable people. Who was one of the first really fertile women? Leah. Yes, Leah who is described as the one with “weak eyes” [Gen 29:17]. There are all sorts of midrashim about Leah to explain the term “weak eyes.” Did she have poor vision? A negative self-image? Too much crying? Whatever the anomaly about Leah’s eyes, Leah is the mother of Judah, leading to King David, and please one day, the messiah. And, through her son Levi, comes Aaron, Moses and all the Kohanim. Leah’s eyes did not interfere with her important role in our people’s lineage.

Another example is Jacob. Among the watershed moments in Jacob’s life, was his wrestling match at Peniel just prior to his reunion with Esau. After the wrestling, Jacob was left with an injury to his hip. The Torah is very specific: Jacob was left with a limp [Genesis 32:32]. It is unclear how long Jacob limped, but limp he did. It might have been a short-term injury or a life-long challenge. We don’t know. What we do know, is that after the wrestling match, Jacob’s name is changed to Israel: “the one who wrestles with God.” We are known as the Children of Israel, Bnai Israel. Last word of the Torah: Israel. Land that we dream of: Israel. All from when Jacob “won” his wrestling match, when Jacob became disABLED.

Moses, our greatest leader, was a man with many abilities, and numerous challenges. We know he had some sort of speech impediment. Using modern terminology, he likely had anger management and impulse control issues. In various situations, we see Moses hit rocks, throw down the tablets containing the 10 Commandments, and kill an Egyptian taskmaster. After receiving the 10 Commandments the second time, the Torah describes how his face became radiant and the people feared approaching him. Imagine, Moses had a physical characteristic that caused people to fear him. It was uncomfortable to look at Moses. So much so, the Torah explains that at times Moses would wear a mask or veil to conceal his radiance. Despite these flaws, Moses was our greatest prophet. Our leader for 40 years.

One of my favorite Moses Torah stories is at the burning bush. God has just told Moses that he has heard the cries of his people in Egypt. That He will free the Israelites and Moses will lead the people. Moses responds: You got the wrong guy! There is some back and forth between God and Moses. Finally, in desperation, Moses pleads:

"I have never been a man of words, either in times past or now … I am slow of speech and slow of tongue."

God’s message is clear: I made you just the way you are. No excuses. Deficits are not excuses. Most of all, God reminds Moses that he is not alone. God said, “I will be with you.” We know how the rest of this story unfolds. Moses isn’t perfect, but he gets the job done.

We know that the Torah is written with a minimum of words. So when something is repeated, it is worth taking note. Frequency in the Torah is a red flag to pay attention. The commandment, remember that you were a stranger in a strange land, is such a red flag.

The Talmud teaches in Baba Metzia 59b:

Rabbi Eliezer the great used to say: Why does the Torah warn in thirty six places, and some say, in forty six places, concerning the stranger? Because humanity tends towards evil. Why is it written 'Do not wrong a stranger and do not oppress him for you were strangers in the land of Egypt'? It is taught: Rabbi Natan used to say: Do not accuse your neighbor of the blemish that is in you.

If we want to be a part of a welcoming community, we need to act like one. Not just one or two people, but each of us must complete this mitzvah. Not for the stranger, but for our own well-being.