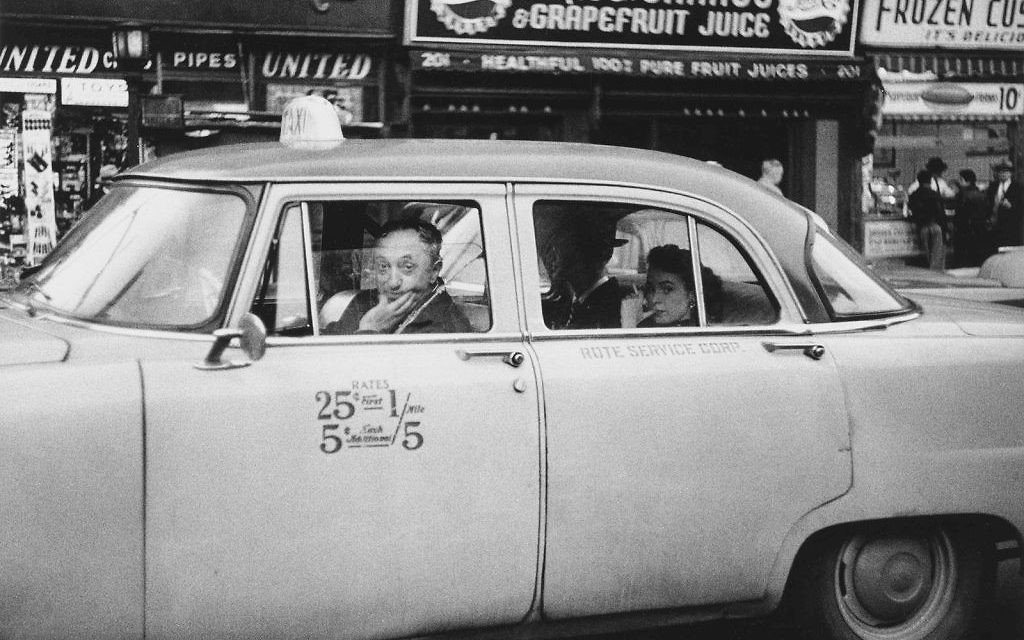 Diane Arbus’ “Taxicab driver at the wheel with two passengers, N.Y.C.” from 1956 ©The Estate of Diane Arbus, LLC. All Rights Reserved

It’s coincidental that a major new biography of the artist, “Diane Arbus: Portrait of a Photographer” by Arthur Lubow (Ecco), has just been published, and a major show including many photos neither seen nor published before, opens this week at the Met Breuer, “diane arbus: in the beginning.” The photos date back to the early years of her career, from 1956 to 1962, when she gave up fashion photography and set out to portray ordinary people and those who markedly stood out.

The exhibition, with 100 photographs all printed by Arbus and drawn from her archive, is hung on two-sided columns, with each photo given its own space. While the columns are in rows, there’s no specific order, whether thematic or chronological, and viewers can slip between the columns and make their own path through the show. The effect on a recent morning, when the gallery was crowded with wandering reporters, was movement that looked like a choreography of street life.

“It’s a design as idiosyncratic as Diane Arbus,” Jeff L. Rosenheim, curator in charge of the Department of Photographs at The Met, says.

Arbus photographs a man who swallows razor blades holding a newborn baby, well-dressed matrons with white gloves clasping the handbags that match their outfits, a taxi driver at the wheel meeting the photographer’s eye, an old woman in the ocean at Coney Island raising her hands, and, also on Coney Island, a man in bathing trunks, a hat, dark socks and lace-up shoes, standing in the sand, his belongings at his feet and someone else’s outstretched legs behind him. Most of her subjects look directly, intently, at her, and thus at the viewer of these remarkable images.

Rosenheim points out that while other street photographers, like her contemporaries Helen Levitt and Walker Evans, sought anonymity on the street and even hid cameras, Arbus “was looking for poignancy, for a direct personal encounter.”

The cover of Arthur Lubow’s new biography of Diane Arbus.

These aren’t only street shots, for Arbus gets herself invited — or perhaps pushes her way — into hotel rooms, dressing rooms and the kitchen of a Russian midget, creating intimacy. Few of her subjects smile, other than a couple at a nudist camp in New Jersey, shot like any family photo. In an essay in the handsome exhibition catalogue, Rosenheim compares her working method to that of an urban anthropologist.

“She was both of her time and ahead of her time,” Lubow says in an interview, noting that she photographed people with fluid gender identities and people with disabilities. She captures the humanity of the moment.

His book is written in an engaging style, with lots of detail about the artist’s early life — she was born into wealth; her family owned Russeks Fifth Avenue, a luxury women’s department store — and her relationships with friends, lovers, her daughters, her brother poet Howard Nemerov and mentor and lifelong friend Lisette Model. While describing many of her photos, Lubow tells the back stories of how Arbus came to photograph a suburban Westchester couple and their son on their back lawn and Eddie Carmel, known as The Jewish Giant, along with his parents, in their modest home, the lamps covered in plastic and a photo of Jerusalem on the wall.

Both of these photos are in the show, and they’ll be familiar to viewers — these were taken later than the others and hang in a separate room, part of a portfolio of ten photographs she assembled.

“She stood outside any scene, watching, at the same time as she participated,” writes Lubow, whose 700-plus-page book grew out of an article in The New York Times Magazine. He says that writing a biography is like taking a photo: “What’s excluded is as important as what’s included.”

He describes Arbus as endlessly curious, able to defy her own initial timidity, and as “the most intelligent of photographers.” She was known among friends as a hoarder of secrets, rarely sharing her own even as she pushed others to talk. In 1971, at age 48, she took her own life.

Lubow says that Arbus was very aware of being Jewish; in fact, growing up in Manhattan, she thought everyone was Jewish.

“To me, there’s black comedy in her photos” he says, suggesting that the mix of pain and humor in her work is a particularly Jewish response to misfortune.

Arbus also seemed to see the holiness of everyday things. She said, “For me the subject of a picture is always more important than the picture. And more complicated.”