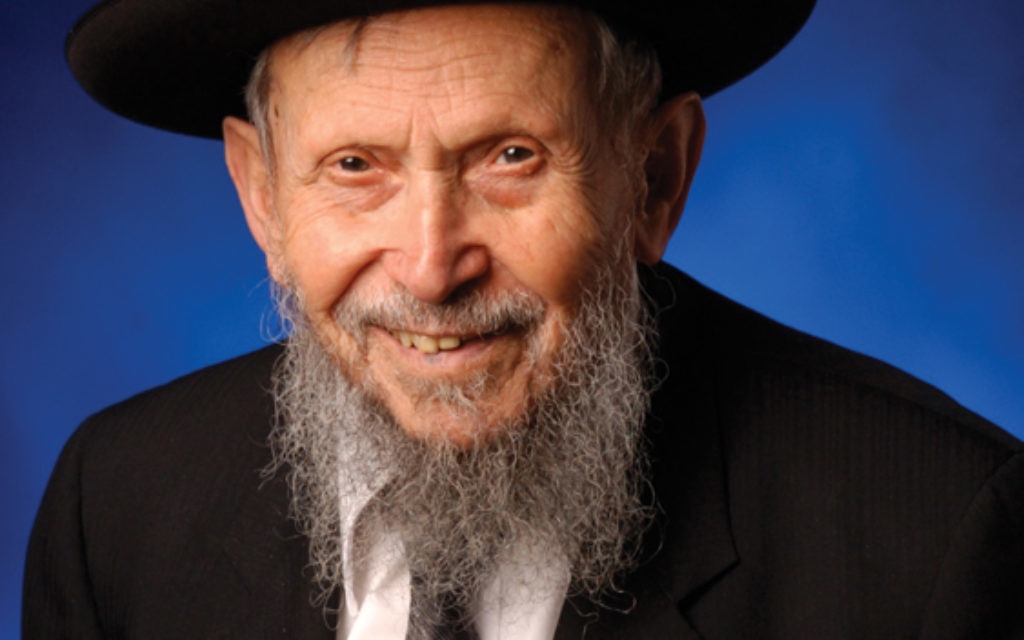 Meir Goodman, a sophomore at Yeshiva University last year, took part every weekday in an elective one-on-one chavruta study session about the Talmud’s Shabbos tractate. He and his partner would sit across from each other at a desk in a small office for an hour, their Gemaras open in front of them.

At the end of the semester’s final session in June, Goodman’s partner hugged him, with a wish that “I’ll see you when you come back” in September.

Goodman’s study partner, Rabbi Gershon Yankelewitz, died at 104 on Aug. 19 of a heart attack he suffered during the morning Shacharit service in upstate New York, where he spent his summers for several years. He was buried in Israel.

Rabbi Yankelewitz, who lived in the Pelham Parkway neighborhood of the Bronx, was believed to be the oldest person who maintained a regular teaching schedule at any university, yeshiva or rabbinical school in the United States, according to a YU spokesman. With the title senior rosh yeshiva, he taught a daily Talmud class and conducted a weekly Mussar (ethics) lecture for 60 years, and gave a daily lecture on Mishnayot between Mincha and Maariv services at the Young Israel of Pelham Parkway.

Until he was 100, he would travel from the Bronx to the YU campus in the Washington Heights section of Manhattan by taking two buses. When YU administrators learned of the rabbi’s exhausting commuting schedule, they provided him taxi rides.

At 104, “he had a strength about him that I never saw in people 30 years younger,” Goodman, eight decades younger than the rabbi, said. “He was vibrant and alive and moving. I think I had more sick days than he did last year.”

Rabbi Yankelewitz, a native of Poland who studied with two fabled leaders of European Jewry’s pre-World War II Orthodox community — Rabbi Israel Meir Kagan, better known as the Chofetz Chaim; and Rabbi Yerucham Levovitz, of the Mir Yeshiva — fled the Nazis with fellow Mirrer students at the start of the war. The entire yeshiva temporarily relocated in Kobe, Japan, before settling in Shanghai, China, until 1947.

Rabbi Yankelewitz, who lost many members of his immediate family in the Holocaust, came to the U.S. that year.

“Rabbi Yankelewitz by his nature and learning so represented both our history and our destiny,” said YU President Richard Joel. “For over half a century he taught his students how to learn and how to live. We will always remember him.”

During his six decades at YU, Rabbi Yankelewitz taught “thousands” of students, said Rabbi Chaim Bronstein, administrator of the school’s Rabbi Isaac Elchanan Rabbinical Seminary (RIETS). When he enrolled in YU in 1966, Rabbi Bronstein studied under Rabbi Yankelewitz — that Talmud class took place in Yiddish; Rabbi Yankelewitz switched to lecturing in English in the next decade, in recognition of a changing student demography.

“He had a very close connection with his students,” Rabbi Bronstein said.

YU staff members and students this week told of Rabbi Yankelewitz’s acts of piety and kindness — buying a coat and a suit one winter for a student who had limited funds for clothing; offering prescient dating advice to students 80 years younger than he was; writing by heart the text of a ketubah when the wedding certificate at a wedding he was attending could not be found; insisting, at 100, in taking an active part in baking his own matzot for Passover; and dancing in the street at YU’s Chag HaSemichah (ordination celebration) this spring.

“We have lost a true giant,” said Adam Rosenberg, a YU senior.

“Rabbi Yankelewitz was an extraordinary person,” said Rabbi Zevulun Charlop, RIETS dean emeritus. “He was a man of God and a man of principle. His memory was fantastic.”

Why did Rabbi Yankelewitz keep teaching past the age when most people retire?

Rabbi Yankelewitz’s wife Bluma died in 2010. He is survived by four sons, all of whom are rabbis — Dovid, Yaakov, Yoel and Moshe; three daughters, Devora Fromowitz, Pearl Gross and Gitty Lipsius; and many grandchildren and great-grandchildren.

While waiting for the start of YU’s Chag HaSemichah (ordination celebration) on the school’s campus this spring, Rabbi Yankelewitz turned to Rabbi Charlop.

“Rabbi, I’m praying for you,” Rabbi Yankelewitz said in Yiddish.

“What are you praying for me?” Rabbi Charlop asked.

“He stopped, like a great comic,” to whom timing is vital, Rabbi Charlop said.

Then Rabbi Yankelewitz completed his thought, with a smile — “and that I can see it.”