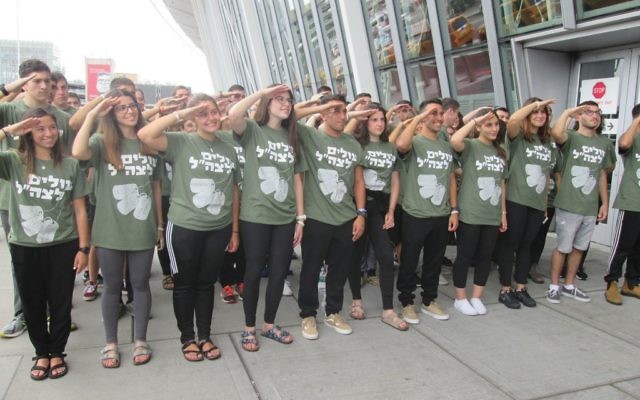 The 68 new immigrants who will soon be Lone Soldiers in Israel pose for a group photo at JFK Airport. They will be serving under the framework of Garin Tzabar, an army program for immigrant Lone Soldiers. Michele Chabin

Lod, Israel — At 22, Adin Fuchs is significantly older than the Israelis who typically begin serving in the Israeli Defense Forces at 18 or 19. But that hasn’t deterred Fuchs, who was raised in Goshen, N.Y., from fulfilling her IDF obligation.

“I grew up identifying as Israeli because my mom’s Israeli,” Fuchs said during a flight to Israel this week sponsored by Nefesh B’Nefesh and its partners.

Fuchs, like other foreign-born children of Israelis, automatically inherited Israeli citizenship from her mother. Although she probably could have received an IDF exemption because she was born and raised abroad, Fuchs said she is excited about her pending military service.

“I hope to serve in a unit that helps Syrian refugees receive medical and other assistance. What’s happening in Syria hurts so much,” she said of the civil war and its atrocities. “I’m so proud of Israel for helping the Syrian people.”

Fuchs was one of the 68 Lone Soldiers — the term for those serving with no immediate family in Israel — (36 women, 32 men), on the most recent Nefesh B’Nefesh flight, the 57th since the organization’s inception in 2002. Many are the children of at least one Israeli citizen who left Israel, sometimes decades ago. The remainder were young Americans who feel driven to do military service in Israel even without a legal obligation to do so.

The percentage of 18-to-35-year-old North Americans making aliyah has steadily increased, according to Nefesh B’Nefesh co-founders Rabbi Yehoshua Fass and Tony Gelbart, who accompany every flight of new immigrants to Israel.

“We’re seeing a few trends that mirror the demographics in North America,” Fass noted. Compared to the early years of Nefesh B’Nefesh, “today’s Modern Orthodox families that make aliyah tend to be smaller, with fewer children, and there’s an increase in the number of non-Orthodox singles making aliyah” on their own.

Gelbart explained that “instead of a family with six children, six different individuals are making aliyah.”

Fass said it is “fascinating” to read the essays young prospective olim include in their Nefesh B’Nefesh applications.

“Some are products of groups like Birthright, NCSY and Camp Ramah, where they felt a national or spiritual connection to Israel, and they’re looking for that reconnection. We also see how anti-Semitism on college campuses is sparking pro-Israel sentiments.”

Still, other young people don’t consider Israel so much as a refuge as a land of opportunity.

“They see Israel as the start-up nation,” Fass said, adding that some of the olim on the plane had already accepted positions at Israeli tech companies. Another new immigrant who will be flying to Israel later this week has landed a partnership at a New York law firm but will be working from Israel.

Fass said the increase in non-Orthodox singles, both Lone Soldiers and professionals, prompted his staff to adapt its marketing and pre- and post-aliyah services to this demographic. These days Nefesh B’Nefesh is more likely to offer an evening of Sushi & Jazz in a neutral venue than on the campus of Yeshiva University, he said.

“They come because they grew up hearing stories about the army, they feel committed to do their share for Israel.”

In 2016 the organization created a second headquarters, this one in Tel Aviv, to serve the mostly non-Orthodox new olim who settle there. The office has a division for Lone Soldiers and serves as a work hub for immigrants during their first or second year of aliyah where they receive coaching and mentorship.

Zev Gershinsky, Nefesh B’Nefesh’s executive vice-president, who wasn’t on the flight, said the organization is seeing a “growing number” of Israeli children born and raised outside Israel.

“They come because they grew up hearing stories about the army, they feel committed to do their share for Israel,” he said.

The parents of diaspora Israelis, he noted, “are for the most part very supportive” of their children’s decision. Once they arrive they usually have a support system of grandparents, aunts, uncles and cousins.

Others include many young olim without Israeli parents or family support. Nefesh B’Nefesh, Tzofim-Garin Tzabar and Maslul Michael in memory of Michael Levin, the paratrooper killed in 2006 whose family created the Lone Soldier Center in his memory, try to fill the void.

“We raised him to be a Zionist and make aliyah, and now he is.”

On the plane, 19-year-old Jordie Wise from Hollis Hills, Queens, said a four-month Ramah program in Israel when she was 15 changed her life.

“I saw people three years older than I was joining the army and risking their lives to defend Israel,” said Wise, whose father is a Conservative rabbi.

Yoni Meiri, 18, an Orthodox young man from Brooklyn who will be joining a hesder yeshiva army program, is the first member of his immediate family to make aliyah. He decided to move to Israel “because I wanted to come home. It’s cheesy, but it’s true,” he said. His resolve was strengthened further during Tsuk Eitan, Israel’s 2014 war with Hamas.

Before Yoni boarded the flight, his mother, Beth, said she was proud of her son. “We raised him to be a Zionist and make aliyah, and now he is.”

Michele Chabin was a guest of Nefesh B’Nefesh on the group’s Aug. 14-15 flight to Israel.